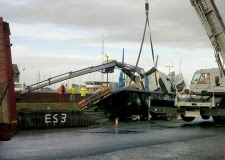 A LORRY driver has been charged after a man was crushed to death at Ipswich Docks.

Paul Napier, a 48-year-old lorry driver from Inglenook in Clacton, has been charged with manslaughter, inflicting grievous bodily harm without intent and Section 3 (2) of the Health and Safety at Work Act 1974. He will appear before Ipswich Magistrates Court on August 20.

Emergency services were called to a report of two men being crushed when a section of pontoon tipped off the back of a lorry which was parked on Cliff Road, Ipswich just before 6pm on December 16 last year.

Neville Wightman, who was 52 and from Ipswich, died at the scene. A 42-year-old man from Lowestoft was taken to Ipswich Hospital with serious but not life-threatening injuries.

The charges today follow a joint investigation carried out by Suffolk Police and Health and Safety Executive. 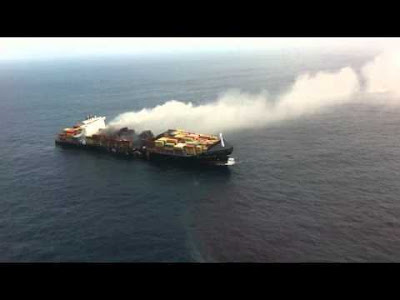 A vast deep-sea container port is being built 20 miles down the River Thames from London, in Thurrock, Essex - but how will it fare when it opens next year?

"According to the GPS [Global Positioning System], we're about 400m [1,300ft] out into the Thames. Here we're on the newest part of England," says the director of civil engineering at the London Gateway project, Andrew Bowen, as he parks on a recently deposited mound of sand and points to a ship surrounded by pipes in the middle of the Thames.

The dredger is like a floating vacuum cleaner, sucking up sand and silt from the river bed to deepen the river channel ready for large ships. It then deposits the material on the building site to create land on which the deep-sea port can be built.

London Gateway is being built by the Dubai-owned company DP World at a cost of £1.5bn ($2.35bn), on the site of a former oil refinery in Essex.

The first ships should start arriving by the end of next year and when it is completely finished it will be able to unload six of the biggest container ships in the world at the same time.

Most of the port's customers will be bringing imported goods from China and the Far East to retailers in the UK.

London Gateway chief executive Simon Moore says: "We're just 20 miles away from Europe's largest economic zone, so this is the closest that we can really get to London."

He says the London Gateway plan is reminiscent of hundreds of years ago when London had a flourishing port nearer the city.

"We're bringing London and the UK's hub port back home again to the River Thames."

But Neil Davidson, a ports expert with the consultancy company Drewry, who has worked for London Gateway, is cautious about the new London port, which gained planning permission before the global financial crisis hit.

But London Gateway is more than just a port. The developers are also building what they claim will be Europe's biggest logistics park - a huge area set aside for warehouses to handle the imported cargo.

At the moment, whatever their ultimate destination, most of the goods imported into the UK are taken by road, and some by rail, to big distribution centres in the Midlands, the traditional logistics hub for the country.

However, at present some goods are being driven north from southern ports to Midlands distribution points, only to be sent down south again.

London Gateway is hoping some companies will want to move their distribution centres to the park at the new port and in doing so, change the logistics map of Britain.

However, whatever gains London Gateway makes, other areas of the UK could lose out - notably the Port of Felixstowe in Suffolk, 75 miles away, which has dominated British container trade for the past 30 years.

Clemence Cheng, managing director of the Central Europe division at Hong Kong-based Hutchison Port Holdings, which owns Felixstowe, says it welcomes competition but Felixstowe will still be the bigger port, even when London Gateway is fully finished.

Mr Cheng rejects the argument companies will be attracted to London Gateway by its closer proximity to the South East and London.

"Now when you look at it, will a manufacturer want to take their truck load of cargo on the M25 motorway, [or] through a very congested railway to go back into London?

"We're the port for Britain. We're not only for London - London is 70 miles away from Felixstowe - but we're servicing the entire country."

The ports get their business from the giant shipping lines that use them, but London Gateway has not yet signed up any shipping companies as clients.

The Danish-owned Maersk is the biggest container ship operator in the world, but it is currently committed to Felixstowe.

The world economic outlook is uncertain for everyone at the moment and the shipping industry is facing a tough year.

However, some British ports, such as the Port of Tyne in the north-east of England, have produced record profits in recent years and ports expert Neil Davidson is confident the prospects for ports are better than for their shipping-sector customers.

"Container shipping is a much more homogenous industry, whereas ports are much more unique in what they can offer, and the profitability reflects that."

Strike off at Portsmouth

An industrial dispute which had threatened to disrupt ferry traffic at a key cross-channel hub has been averted.
Earlier this month Lloyd’s Loading List.comreported that Quay Assistants at Portsmouth International Port had voted to go on strike over new contracts, but they have now accepted an offer from management at the port, which is owned by Portsmouth City Council. The new agreement will see all staff moved onto superior ‘old’ contracts and all overtime after midnight will be worked on a voluntary basis. In a joint statement, Portsmouth City Council and Unite, which represents the quay assistants, said: "Earlier last week negotiations between Unite the union and Portsmouth International Port resumed and a new proposal was offered to quay assistants. A consultative ballot has taken place amongst Unite members and the quay assistants have unanimously voted in favour of accepting the new proposal. “This result has resolved the current difficulties and both sides look forward to working constructively in the future." Unite regional officer, Ian Woodland said: “This demonstrates the importance of collective action. We had a 100% turn-out on the vote for industrial action and this strong action made management reconsider its position.”The port’s 18 quay assistants are responsible for tying up and releasing cross-channel ferries.
Posted by Felixstowe Dockers No comments:

Since yesterday evening the team of firefighting experts is unable to go onboard MSC FLAMINIA due to bad weather conditions. In the coming days a further deterioration of the weather is predicted. Therefore, MSC FLAMINIA and the group of tugboats have pulled out of the 200 mile zone and maintain a position approximately 200 miles off the British coast.According to the salvage team on site the fire in cargo holds 4, 5 and 6 has been extinguished. However, smoke is visible above cargo hold 7 and the temperatures in this area are rising. MSC FLAMINIA is still listing by 10 degrees.A decision to enter a sheltered coastal area has not yet been made but is expected in the coming days.
http://www.youtube.com/watch?v=OFYO8MlsyRg&feature=share
Posted by Felixstowe Dockers No comments: