CSCL to sell 20pc of its boxes to CLC for cash, then will lease them back 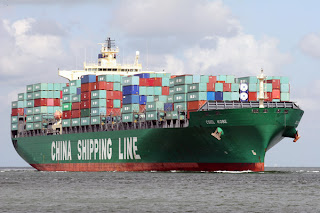 CHINA Shipping Container Lines (CSCL) recently announced plans to sell 20 per cent of its containers to Hong Kong-based CLC Maritime Container Leasing Co and will then lease them back to strengthen its financial position.
The Hong Kong and Shanghai-listed CSCL said in a statement it has agreed to sell 139,941 containers that have been in use for between three and six years to CLC Maritime Container Leasing Co for US$358.6 million and will then lease the boxes back for $221.27 million for a term of four years.
The world's ninth largest carrier said this deal will contribute to a gain of $112 million. CSCL posted a third-quarter net profit of CNY991 million (US$159 million), reversing a net of loss of CNY951.23 million recorded in the same period last year.