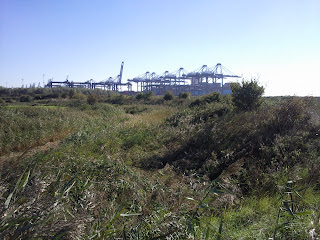 TRADING standards officers have today launched an investigation after seizing three containers of allegedly dangerous goods at the Port of Felixstowe.


The consignments – being imported through the terminal, the country’s busiest boxport, from the Far East – are mainly toys, cosmetics and electrical goods destined to be sold to families in Britain.
Officers from Suffolk County Council’s trading standards department monitor cargoes coming through Felixstowe and because of suspicions about the companies involved with the imports decided to investigate the three 40ft containers’ entire contents.
A spokeswoman said officers had “serious concerns” about each of the importers and one of them had been prosecuted previously.
The first box had contained a batch of cosmetics where there was concern over chemicals used, while the second was of radio-controlled toy cars and fashion dolls which had small parts considered potential choking hazards.
The third box was destined for a London fulfilment centre, where goods would be dispatched via internet orders, from multiple Chinese exporters with no details of the import recipients. It contained a large number of electrical items with two-pin plugs, plus poorly-designed toys with incorrect labelling and identification.
“All the items will be tested and thoroughly inspected to see if they meet safety standards,” said the spokeswoman.
“With the two-pin plug electrical items we know straight away that they will not meet standards, and there are concerns over the toys and whether they are made from flammable materials.
“These items could easily have been sold on in this country. Although sometimes something looks like a bargain you really need to consider whether that product, be it an electrical item or a toy, should be brought into your home.
“An incorrectly made electrical item could give you a shock or in the worst case cause a fire, while unsafe toys can be flammable, have small parts or sharp edges.”

BORDER Force officials at the Port of Felixstowe have stopped up to £5million worth of fake goods from entering the UK in the run-up to Christmas.
The seizures have taken place over the last two months and have included fake handbags, purses, clothes and perfumes.
In the last six months, an estimated £25million of dodgy goods have been seized at the Port of Felixstowe.
Kevin Sayer, senior officer for the Border Force at Felixstowe, said: “It’s a constant trade and we are happy when we are taking some people out of the loop.
“All of these goods on the market affect genuine trade and it hits them where it hurts – in the pocket.”
Mary Strang, senior trading standards officer, added: “It’s a significant amount counterfeit products and shows the amount of products that are coming into the country.
“It really is critical that they are picked up.”
The goods are currently being stored and are likely to be destroyed.