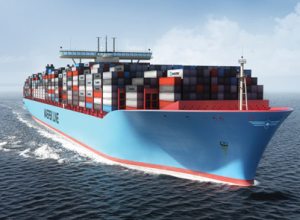 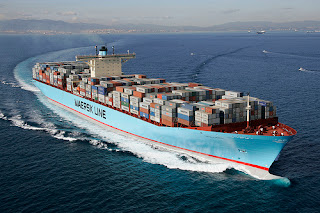 The Global Freight Awards took place in London on Wednesday 21 November. Attended by professionals from large multinational corporations and SMEs across the freight and logistics industry, the judges commented that this year there were an exceptional number of high quality entries.
Maersk Line had been short listed in two categories: “Environment” for Route 2, Maersk Line’s sustainability report; and “Innovation – New Product” for Daily Maersk.
However on the night, the team was taken by surprise as Maersk Line was announced as the winner of Container Line of the Year, a much sought after accolade and the result of Lloyd’s Loading List’s readers’ votes.
Maersk Line was also given a highly commended award for Route 2, the winner being DB Schenker’s freight terminal for its role helping the Olympic Delivery Authority exceed its environmental targets in London’s 2012 Olympic Games.
Finally, Maersk Line was announced as proud winner of the Innovation – New Product award, for Daily Maersk, the industry game changer which has made absolute reliability a reality. The Maersk Line team was absolutely delighted with the industry recognition, which means a great deal when everyone worldwide has worked so hard to make it a success.
David Kennedy Browne, Maersk Line UK & Ireland Sales Director was at the Global Freight Awards, entertaining several important UK key clients, and he collected the awards on Maersk Line’s behalf.
Brian Godsafe, Managing Director of Maersk Line UK & Ireland comments: “I am absolutely delighted by our success at the Global Freight Awards. This is a magnificent achievement and further recognition of our hard work and innovation over the last 12 months – we should all be very proud.”
on November 26, 2012