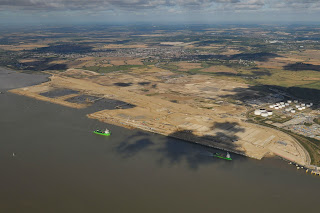 400 shippers, cargo owners and carriers brave the weather and head to Britain’s new hub port
130 shippers and carriers attend Manchester event
100 shippers and carriers to attend in Leeds
Despite 270 flood warnings in place across the UK on Monday night, 400 shippers, cargo owners and carriers made it to London Gateway’s offices on Tuesday morning to view the latest developments at Britain’s new port and Europe’s largest logistics Park, which opens next year on the Thames.
At the ‘Insight to London Gateway’ event, held this week, shippers, carriers, hauliers, and cargo owners were given a unique tour of DP World’s £1.5 billion investment into UK maritime infrastructure.  Similar events have taken place recently in Birmingham, last week in Manchester, and a final event is taking place in Leeds tonight.
The insight event was held to satisfy overwhelming interest in the new deep-sea port from future port users.  Representatives from across the supply chain attended, including multiple deep-sea carriers, freight forwarders, rail and road operators as well as cargo owners and global retailers.
As part of the event, visitors were shown the sheer scale of the development with a convoy of coaches touring the three square miles of land that is owned and managed by DP World, while presentations were given throughout the day to explain the significant benefits of the new port to cargo owners.
Many guests recognised the advantages immediately, Julie Curran, Pricing Manager, Atlantic Pacific Global Logistics, said: "London Gateway offers an excellent alternative for London, Birmingham and Manchester areas, and we see real opportunity by using the new port. We are looking at options now."
Chris Leeder from Magnus Group, a national distribution and logistics provider, said: “London Gateway represents an opportunity for us. There are definitely going to be savings for shipments into London and South East and these savings are going to benefit our customers. The important thing from our perspective is ensuring that we can integrate ourselves into the supply chain and into the volumes of business that are going to shift to London Gateway.”
Commenting on the turnout at the event, Simon Moore, CEO London Gateway, said: “The fact that nearly 300 flood warnings were in place, roads across the country were blocked, rail lines were suffering and we still welcomed 400 guests means that it was an astonishing turn out.”
During the open forum discussion, Dr. Carsten Hinne, Managing Director for DB Schenker Rail UK, spoke about the rail services on offer to shippers to inland terminals. Marc Wynne, Operations Manager, for Roadways Container Logistics, also explained how they see London Gateway benefiting shippers across the UK.
In addition to the London Gateway based event, over 130 shippers and lines attended a similar insight event in Manchester last week.
Charles Meaby, Commercial Director for London Gateway, said: “London Gateway is closer to Manchester, Birmingham and London than its leading competitor. So we went to Manchester to let them know how much closer and how much cheaper it will be for shippers in the North-West using London Gateway. We are talking about shipping closer, which simply put, will save shippers money.”
Tonight, the London Gateway commercial team will be hosting an event at the Leeds Marriott Hotel.  A further London Gateway insight open day for shippers will be announced soon
on November 30, 2012