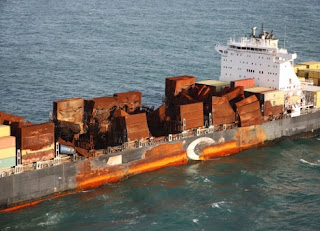 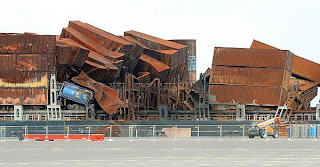 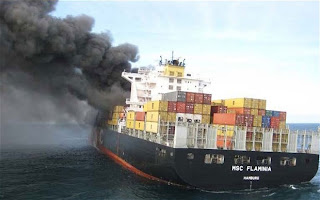 The chief executive of the UK’s Maritime and Coastguard Agency, Sir Alan Massey, has said that Britain had been willing to provide sanctuary for the crippled MSC Flaminia but the offer of help was not needed, contradicting recent claims from Germany that six or seven countries refused assistance.

Britain was prepared to provide sanctuary for the crippled MSC Flaminia but the offer of help was not needed, according to the head of the UK’s Maritime and Coastguard Agency.
MCA chief executive Sir Alan Massey said the UK was ready to help the containership, which caught fire and was then severely damaged by an explosion in the middle of the Atlantic last July.
Confirmation that the UK was willing to allow MSC Flaminia into sheltered waters contradicts recent claims from Germany that six or seven countries refused assistance.
As the nearest coastal state, “we identified potential places of temporary refuge” to which the ship could be towed and then stabilised, Sir Alan told Lloyd’s List.
The MCA said it believed that the salvors made a direct request for a place of refuge to the UK, Belgium, France and the Netherlands on the same day.
“We did not refuse this request and had identified a shortlist of suitable anchorages when Germany offered a port facility and we began work to clear the ship for its journey to Germany,” an MCA spokeswoman said.
The German-owned 6,750 teu vessel did not finally arrive back in port until early September, the delay supposedly reflecting concerns about the risk of further explosions. The ship has only just been declared out of danger after the last of the hot containers were removed.
The UK is one of several countries accused of turning down requests for shelter.
MSC Flaminia’s classification society Germanischer Lloyd said earlier month that the UK, the Irish Republic, France, Belgium, the Netherlands, Spain and Portugal had declined to help as the ship’s owners and salvors tried to put together a rescue plan.
However, Sir Alan said the UK had been prepared to step in, with Secretary of State’s Representative Hugh Shaw monitoring the situation constantly from the moment MSC Flaminia’s plight became apparent.
Three members of crew died as a result of the explosion in or on top of one of the cargo holds that blew dozens of containers in to the sea.
Investigators have yet to determine what caused the fire and blast, but industry experts suspect cargo may have been misdeclared, then stowed in the wrong part of the ship.
As well as raising fresh concerns about what is really inside a container, the accident has led to renewed calls in some quarters for mandatory places of refuge for ships in distress, although there is no industry consensus about whether that is the best solution.
Addressing a meeting of the International Maritime Industries Forum, Sir Alan said he hoped that in future there would be a “better meeting of minds” about how to deal with a casualty like the MSC Flaminia, which had echoes of the Prestige catastrophe a decade earlier.
In that instance, the stricken tanker was refused entry into a Spanish port and subsequently broke in half, spilling huge quantities of crude oil.
Sir Alan acknowledged that part of the problem in MSC Flaminia’s case was the difficulty of assessing the extent of damage to the ship and its cargo, or the risk to health. The large number of parties involved in dealing with the aftermath of the accident added to the complexity of the rescue.
He predicted that this particular casualty would probably lead to some recommendations about how best to deal with ships in distress and in need of shelter.