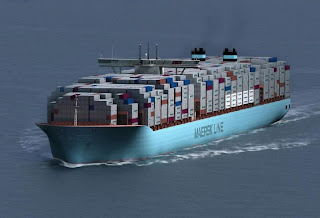 Sydbank expects A.P. Moller-Maersk to show significantlyimproved accounts Friday morning, when the group publishes the results for 2012. The profit after tax is expected to reach DKK 20.2 billion, an increase of nearly 33 percent.
The bank expects the Group's problem child Maersk Line of having sailed a net profit of 2.6 billion home in 2012, while Maersk Oil contributed with 12.7 billion.