EXCLUSIVE: After Triple Es – no more new ships for Maersk 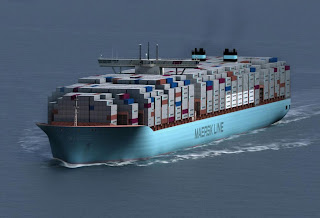 Two months ahead of the arrival of the first 18,000 teu ‘Triple E’ ultra-large container ship, Søren Skou, chief executive officer of Maersk Line, has confirmed that the shipping line will not be placing further ship orders for the foreseeable future. Equally, he does not see the need for ships larger than 18,000 teu.
With no new orders having been placed by Maersk since Q1 – 2011, the head of the world’s largest shipping company stated in an exclusive interview with CM that apart from the delivery of the ‘Triple E’ up to 2015, “I don’t see us placing any new orders anytime in the foreseeable future”.
His comments come after the recent announcement by Gianluigi Aponte, president of Mediterranean Shipping Company, that it had also halted further ship orders, again for the foreseeable future.
The move by both companies has been prompted by last year’s first-half 4% to 6% volume growth plunging to zero generally and to a negative figure on the Asia-Europe trade in the second-half.  Skou predicted that growth this year would only be around 1%.
“Our industry should expect growth much closer to that of global GDP; this has implications on how we add capacity and frankly, the container market is not in need of greater capacity at present,” he told CM.
Although the company announced last year that it would not take up the option on a further ten ‘Triple E’ vessels, Skou again categorically denied reports that Maersk had approached South Korea’s Daewoo Shipbuilding & Marine Engineering shipyard to cancel any part of its initial 20 vessel US$3.8bn order.
“We have not tried to delay the ships or have them [Daewoo] build something else,” he said emphatically.  “The ships will be delivered as originally planned.”
He also does not see the need for bigger ships up to 22,000 teu for a long time, suggesting that some of the important trends that helped accelerate past ship growth have run their course.  He cited offshore manufacturing as one, some of which is now shifting back towards the markets; also growth from containerisation, other than perhaps the reefer trade and some commodities, is another area he believes is “more-or-less over”.
“The only way to add another 25% capacity is in length, as the 18,000 teu ships are very wide,” he said.  “Also trading flexibility and frequency must be considered; you would need a huge market share to fill them.  I just don’t think we can accommodate larger vessels in the foreseeable future, maybe never,” he forecast.
All the ‘Triple E’ vessels will be deployed on Maersk’s Asia-Europe AE10 service alongside the current ‘E’ Class vessels and then enter service on other strings to the Middle East and Mediterranean.  The new tonnage will also join the ‘Daily Maersk’ service, which has recently been extended to include the Indonesian port of Jakarta and Thailand port of Laem Chabang.
Skou stated that he cannot see a time when the current ‘E’-Class and the ‘Triple E’-Class vessels would be deployed on any other route than Asia–Europe, for which they were designed, adding, “The ‘Triple Es’ will be deployed in line with market growth and in such a way not to add more capacity.”