Felixstowe: Drink-driving trucker jailed for being more than four times the limit 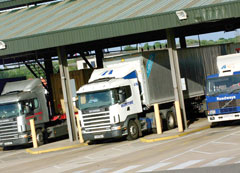 A LORRY driver has been jailed after attempting to drive his HGV on to Felixstowe docks while more than four times the legal alcohol limit.
Gavin Brear had driven to the port from Dunstable, a journey of around 100 miles.
The 45-year-old had been scheduled to load his lorry at the docks - which would weigh 44 tonnes when fully laden - before driving to Milton Keynes.
However, at the time he was caught his 04-registered Volvo cab was pulling an empty 40 feet-long container which would have weighed around 15 tonnes.
Brear was caught when attempting to put a key code into a booking machine as he tried to enter the port through one of its gates.
Although he had driven from Bedfordshire, it is not clear whether he had consumed the alcohol in his system before he began his journey or during it.
Suffolk Constabulary officers were called to Dock Road at 4.55pm on February 27 after being contacted by port police.
Brear, of Liversedge, West Yorkshire, was seen at the check-in gate by a port worker who said the lorry driver was swaying while trying to book into the port.
When the worker approached Brear he noticed a strong smell of alcohol on his breath and called police.
Brear was arrested and taken to Martlesham police investigation centre.
He initially denied to police that he had consumed alcohol and said the last time he had done so was three days earlier.
A breath test showed Brear had 152 microgrammes of alcohol in 100 millilitres of breath. The legal limit is 35mcg.
Brear failed to turn up for his original sentencing date before Ipswich magistrates on Monday.
An arrest warrant was issued and he was subsequently detained in Yorkshire by police and taken into custody.
Magistrates sentenced Brear to 18 weeks’ imprisonment.
He was also disqualified from driving for three years.