Felixstowe: Millions of illicit cigarettes are seized at Port of Felixstowe 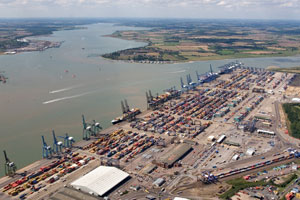 MILLIONS of illicit cigarettes have been seized by border force officers at the Port of Felixstowe.


Officials have said the only attempt made by smugglers to conceal their cargo of nine million cigarettes, which had arrived at the port in a container from Malaysia, was to say they were carrying plastic containers.
The haul, which was discovered after a search by officers on Wednesday, would have cost the Treasury an estimated £2million in unpaid excise duty.
Charlotte Mann, assistant director from the border force at Felixstowe, said: “You would struggle to find a more brazen smuggling attempt.
“The container was full of cigarettes, which were stacked floor to ceiling throughout.
“Seizures like this demonstrate how Border Force officers are at the forefront of the fight against a criminal industry that is worth big money to those involved.”
The seizure comes just a month after an empty pack survey revealed nearly a third of all the cigarettes smoked in Ipswich were illegal.
Border force officers use a variety of pieces of hi-tech search equipment to tackle immigration crime and detect banned and restricted goods.