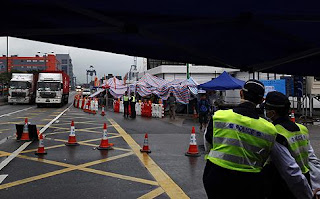 Tensions over the dockers' strike rose further yesterday as one of Li Ka-shing's top lieutenants publicly slammed unionist lawmaker Lee Cheuk-yan.Canning Fok Kin-ning claimed Lee was not genuinely interested in helping the workers and harboured ulterior motives, reported the South China Morning Post."Lee Cheuk-yan resorts to every means – he doesn't want an outcome at all, hoping that as the strike drags on, he can negotiate with Li so as to boost his own publicity," Fok, Hutchison Whampoa's group managing director, said to reporters on a trip to Beijing. "This [strike] has been using the style of the Cultural Revolution [where people are vilified on banners and posters]," he added.Fok said he did not believe the dockers' working conditions were that bad and they were "willing to work long hours".His remarks were the first public ones on the strike from Hutchison Whampoa, the parent company of port operator Hongkong International Terminals, whose contractors employ the 450 striking dockers.Lee hit back, deriding Fok as the "King of all workers", a swipe at the executive's high pay package, and said Fok could not understand the plight of grass-roots workers.As for Fok's reference to Cultural Revolution tactics, Lee said: "We just want to express how discontented we feel ... [the head shots] are just comical creativity used all the time in modern society to express the emotions of people," Lee said.As the strike entered its 24th day yesterday, HIT placed full-page ads in most newspapers in the city, other than Apply Daily, attacking the union's demands as "unachievable". The ad alleged Lee's role in the industrial action was purely to advance personal interests.In the Chinese-language version of the statement, HIT wrote: "Is someone unwilling to make a deal? Is there someone who wants to achieve his own purpose and is ignoring the interests of the workers?"But those sentences did not appear in the English-language version of the statement, headed "Breakthrough sought after three weeks of labour dispute".The ads said "the average monthly salary for dockers has already reached HK$20,000" and the 20 per cent pay rise they have been demanding would "create an impact across other industries and cause irreparable damage to Hong Kong".Union of Hong Kong Dockers strike organiser Stanley Ho Wai-hong said: "The figures provided by HIT are misleading, as dockers would have to work many 24-hour shifts to earn HK$20,000 a month. But that is still way less than the amount earned by dockers hired directly."The union, backed by Lee's Confederation of Trade Unions is demanding pay rises of 17 to 24 per cent and better conditions.Based on advertisement rates for the papers listed online, HIT may have spent HK$1 million or more on yesterday's ads.Meanwhile, a docker is seeking damages against the port operator and its subcontractor Global Stevedoring Service in District Court, saying he injured his right arm in an electric shock two years ago while working in the control room of a crane at Container Terminal Four.


Hong Kong dockworkers briefly blocked a road and refused on Thursday to stop camping out at a tower owned by the city's richest man, as their bitter strike looked set to drag into a second month.About 300 striking workers protested by walking slowly on the road in front of the Asian financial hub's container ports. The protest lasted several hours and left trucks backed up for several kilometers.The workers have been on strike since the end of March. They are demanding higher pay and better working conditions from the middleman companies supplying labor to port operator Hongkong International Terminals, controlled by billionaire Li Ka-shing.The workers also ignored a demand to leave their camp in front of Li's skyscraper headquarters by noon, under threat of legal action. They've been sleeping in tents outside the Cheung Kong Center in the city's financial district for about a week as they press their demands.The dockworkers have put up signs depicting Li as a devil and accusing his company of exploiting workers. Li, whose conglomerate Hutchison Whampoa controls Hongkong International Terminals, is worth $31 billion, according to Forbes, making him Asia's richest person.Hong Kong's port is one of the world's busiest and the strike has slowed shipments of toys, clothes and shoes moving from factories in mainland China to overseas markets. Japanese shipping company Mitsui O.S.K. Lines said Thursday a Jakarta-bound vessel was delayed due to the strike.Legislator and union leader Lee Cheuk-yan said the strikers decided to block the road in response to "lies put forward" by Hongkong International Terminals about their working conditions."Our purpose is not to affect the truck drivers. We are just there to protest," Lee said. "But of course there may be collateral damage."Lee said the protesters wanted to dispute newspaper ads taken out this week by the port operator that said the workers have enough time to rest, eat lunch and go to the bathroom. Operators of the giant gantry cranes moving containers on and off ships have complained that they have to eat and relieve themselves inside their crew cabins.The workers want a 20 percent pay hike to make up for pay cuts in previous years. The subcontractors are offering raises of just 5 to 7 percent.Hutchison operates 12 berths at four of Hong Kong's nine container terminals and two others with a partner.Source: Associated Press