While the dockers strike is costing Hongkong International Terminals a reported HK$5 million a day, the actual cost of the dispute is costing the maritime and logistics industry much more as ships and cargo are diverted to other ports.Alan Lee Yiu-kwong, chairman of the Hong Kong Container Terminal Operators Association, said it was too early to estimate how much the month-long dispute was costing and how much cargo Hong Kong had lost. The association represents the terminal companies including HIT, Modern Terminals and Cosco-HIT that operate port facilities at Kwai Tsing.But estimates from the Port Development Council show container volumes through the nine Kwai Tsing container ports fell 5.9 per cent in March to 1.42 million teu (20-foot equivalent units) compared with a year earlier. Lee expected this to fall further this month as the dockers' strike took hold. The April cargo throughput figures will be released by the middle of next month.Lee said: "We are urging all interested parties to sit down and resolve the issue to minimise the impact on the industry, make Hong Kong more competitive and not hit the 200,000 people who depend on the port for their livelihood."Shipping lines and logistics firms have also been hit with extra costs as ships burn extra fuel while waiting to berth and vessels and cargo are diverted to other ports. Roberto Giannetta, from the Hong Kong Liner Shipping Association, said the strike's adverse impact on shipping lines was "particularly an issue in the days and weeks immediately after the strike started" when arrangements for each Hong Kong shipment had to be sorted out individually. "This was frustrating, took time and effort, and was ultimately [financially] costly."Giannetta said now various arrangements had been put in place for most of the cargo that needed to be moved via Hong Kong. He said some freight was being delayed while ships waited to dock at the terminals, other cargo was being discharged at other Hong Kong facilities or at alternative ports and being barged or trucked to Hong Kong.It is the longer term damage to Hong Kong's reputation as a fast and efficient transshipment port that has some senior industry executives concerned. Lee said once container shipping lines "feel that [Hong Kong's] costs are too high and it's not as efficient as other transshipment ports then they will change".If carriers feel "Hong Kong is not as efficient, then for them to change is easy", he said, adding that Shenzhen, Shanghai, Kaohsiung and Busan were snapping at Hong Kong's heels for transshipment volumes. The last three cities already handle more transshipment cargo than Hong Kong at a time when intra-Asia emerged as the world's biggest trade hub, according to figures compiled by Hong Kong port planning consultant ICF GHK.Source: South China Morning Post 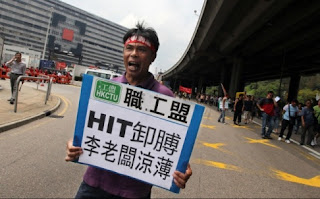 Striking dock workers say they have decided to meet the contractor at the centre of their month-long pay dispute, without the other contractors involved.
The Union of Hong Kong Dockers had insisted it would not resume talks if they were only with contractor Everbest Port Services, which employs 300 of the 450 workers who walked off the job on March 28.
But union spokesman Stanley Ho Wai-hong yesterday said they were willing to go back to the negotiating table with Everbest in an attempt to break the deadlock. "We are not giving in … we are trying to resolve the dispute," Ho said.
Another contractor caught up in the dispute, Global Stevedoring Services, said it would close down after tomorrow. It employs about 130 of the striking dockers.
The union also hopes to talk to the port operator, Hongkong International Terminals (HIT), about the pay package and working conditions to be offered by the contractors who take over Global's work.
A representative of HIT was present at the last three meetings, but only as an observer.
The union is seeking a pay rise of about 20 per cent. Ho said yesterday there was room for negotiation but any offer must be a "double-digit figure".
Separately yesterday, about 10 supporters of the striking workers urged tourists not to check in to a North Point hotel owned by Li Ka-shing, whose Hutchison Whampoa is the parent company of port operator HIT.
One of those outside the hotel was a tourist himself. Sanjay Garla, 36 of the United States, came to Hong Kong two weeks ago as a tourist and learned about the dispute while watching the local television news.
He decided to show his support for the striking dockers by handing out fliers to tourists outside the Harbour Grand hotel in Wan Chai, urging them not to stay there. "By checking in, you are saying that this richest guy in Asia [Li] has the right to exploit the workers," Garla said.
Hutchison Whampoa, whose subsidiary owns the hotel, said in a statement that the protesters were "troublemakers" for harassing its customers.