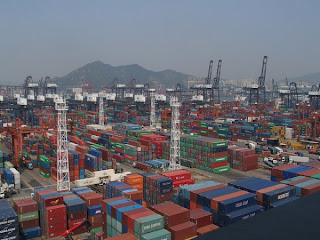 The International Transport Workers' Federation (ITF) issued an update on the current situation in the Port of Hong Kong, where subcontracted workers have been on strike for nearly a month.
Despite the continuation of the strike, there have been several developments in this dispute, according to the ITF. Global Stevedoring, a contractor of Hong Kong International Terminals (HIT), has announced it is closing its operations, blaming the Union of Hong Kong Dockers (UHKD) strike action, which the ITF claims is a blatant attempt to turn public opinion against the union.
In addition, a work-to-rule being carried out by members of the HIT union has been halted after an agreement was made with HIT management to give overtime compensation of 1.4 times the hourly rate, a victory for the union.
In a statement, the ITF said that it welcomes the agreement between HIT and the HIT union and now calls for the same standards with regards good faith and transparent negotiation to be applied to the subcontracted workers, who remain out on strike.
Members of the Union of Hong Kong Dockers have been picketing at Kwai Chung terminal in a bid to make Hong Kong International Terminals (HIT) management return to negotiations. There is also a union presence outside the offices of Hutchison Whampoa, the parent company of terminal operatorHutchison Port Holdings (HPH), of which HIT is a subsidiary.

Turbo Top Limited, a subsidiary of Hutchinson Whampoa Limited, has applied to the Hong Kong High Court for an injunction against the Hong Kong Confederation of Trade Unions (HKCTU) to prevent obstruction of Cheung Kong centre and its surrounding areas.
Striking dock workers began camping outside the centre, which is home to the headquarters of Asia’s richest man, Li Ka-shing, last week.
In a statement released today, Hutchinson Whampoa, the parent company of Hutchsion Port Holdings and its subsidiary, HIT, said that the storming of the offices of Cheung Kong Holdings, was an intolerable nuisance and disruption.
Following this, Stanley Ho Wai-hong, secretary general of the Union of Hong Kong Dockers, said that the strikers actions may escalate further – which prompted Hutchison Whampoa to seek the injunction.
The judge is set to hear the case next Friday. In the meantime, its been agreed that demonstrators be restrained from unlawful entry into the Cheung Kong Centre.
Subcontracted workers have now been on strike at at Kwai Tsing Port for 28 days because of slow discussions over a pay rise, improved hygiene facilities and the need for longer breaks.
Members of the Union of Hong Kong Dockers have been picketing at Kwai Chung terminal in a bid to make Hong Kong International Terminals (HIT) management return to negotiations.
Despite the continuation of the strike, there have been several developments in the dispute. Global Stevedoring, a contractor of HIT, has announced it's closing its operations, blaming the strike action.
An agreement has been also been reached with the HIT union and HIT management to award workers overtime compensation of 1.4 times the hourly rate. The ITF welcomes this but wants the agreement to be applied to the subcontracted workers, who still remain out on strike.