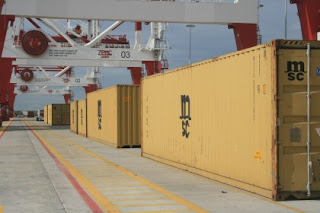 Containers have been more important for globalisation than freer trade

THE humble shipping container is a powerful antidote to economic pessimism and fears of slowing innovation. Although only a simple metal box, it has transformed global trade. In fact, new research suggests that the container has been more of a driver of globalisation than all trade agreements in the past 50 years taken together.
Containerisation is a testament to the power of process innovation. In the 1950s the world’s ports still did business much as they had for centuries. When ships moored, hordes of longshoremen unloaded “break bulk” cargo crammed into the hold. They then squeezed outbound cargo in as efficiently as possible in a game of maritime Tetris. The process was expensive and slow; most ships spent much more time tied up than plying the seas. And theft was rampant: a dock worker was said to earn “$20 a day and all the Scotch you could carry home.”
Containerisation changed everything. It was the brainchild of Malcom McLean, an American trucking magnate. He reckoned that big savings could be had by packing goods in uniform containers that could easily be moved between lorry and ship. When he tallied the costs from the inaugural journey of his first prototype container ship in 1956, he found that they came in at just $0.16 per tonne to load—compared with $5.83 per tonne for loose cargo on a standard ship. Containerisation quickly conquered the world: between 1966 and 1983 the share of countries with container ports rose from about 1% to nearly 90%, coinciding with a take-off in global trade (see chart).
The container’s transformative power seems obvious, but it is “impossible to quantify”, in the words of Marc Levinson, author of a history of “the box” (and a former journalist at The Economist). Indeed, containerisation could merely have been a response to tumbling tariffs. It coincided with radical reductions in global trade barriers, the result of European integration and the work of the General Agreement on Tariffs and Trade (GATT), the predecessor of the World Trade Organisation (WTO).

Yet a new paper aims to separate one effect from the other. Zouheir El-Sahli, of Lund University, and Daniel Bernhofen and Richard Kneller, of the University of Nottingham, looked at 157 countries from 1962 to 1990. They created a set of variables which “switch on” when a country or pair of trading partners starts using containers via ship or rail (landlocked economies, such as Austria, often joined the container age by moving containers via rail to ports in neighbouring countries, such as Hamburg in Germany). The researchers then estimated the effect of these variables on trade.
The results are striking. In a set of 22 industrialised countries containerisation explains a 320% rise in bilateral trade over the first five years after adoption and 790% over 20 years. By comparison, a bilateral free-trade agreement raises trade by 45% over 20 years and GATT membership adds 285%.
To tackle the sticky question of what is causing what, the authors check whether their variables can predict trade flows in years before container shipping is actually adopted. (If the fact that a country eventually adopts containers predicts growth in its trade in years before that adoption actually occurred, that would be evidence that the “container” jump in trade was actually down to some other pre-existing trend.) But they do not, the authors say, providing strong evidence that containerisation caused the estimated surge in trade.
What explains the outsize effect of containers? Reduced costs alone cannot. Though containers brought some early savings, shipping rates did not drop very much after their introduction. In a 2007 paper David Hummels, an economist at Purdue University, found that ocean-shipping charges varied little from 1952 to 1970—and then rose with the cost of oil.
Put them in a container
More important than costs are knock-on effects on efficiency. In 1965 dock labour could move only 1.7 tonnes per hour onto a cargo ship; five years later a container crew could load 30 tonnes per hour (see table). This allowed freight lines to use bigger ships and still slash the time spent in port. The journey time from door to door fell by half and became more consistent. The container also upended a rigid labour force. Falling labour demand reduced dockworkers’ bargaining power and cut the number of strikes. And because containers could be packed and sealed at the factory, losses to theft (and insurance rates) plummeted.
Over time all this reshaped global trade. Ports became bigger and their number smaller. More types of goods could be traded economically. Speed and reliability of shipping enabled just-in-time production, which in turn allowed firms to grow leaner and more responsive to markets as even distant suppliers could now provide wares quickly and on schedule. International supply chains also grew more intricate and inclusive. This helped accelerate industrialisation in emerging economies such as China, according to Richard Baldwin, an economist at the Graduate Institute of Geneva. Trade links enabled developing economies simply to join existing supply chains rather than build an entire industry from the ground up. But for those connections, the Chinese miracle might have been much less miraculous.
Not only has the container been more important than past trade negotiations—its lessons ought also to focus minds at future talks. When governments meet at the WTO’s December conference in Bali they should make a special effort in what is called “trade facilitation”—efforts to boost efficiency at customs through regulatory harmonisation and better infrastructure. By some estimates, a 50% improvement in these areas could mean benefits as big as the elimination of all remaining tariffs. This would not be a glamorous outcome, but the big ones seldom are.