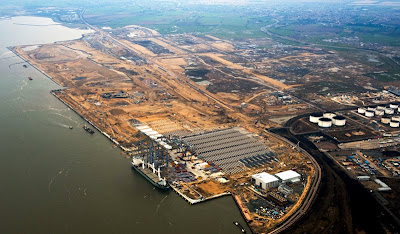 The Mayor of London, Boris Johnson has today given the thumbs up to DP World London Gateway in response to new figures that estimate that as many as 27,700 jobs will be generated in the capital and the wider region from the project.
The figures, according to Oxford Economics’ forecasts, also claim that the new deepwater port and supporting facilities will contribute around £2.4 billion to the UK economy.
Johnson, who attended the London Gateway site for his second time today, said that it would not only help London to “regain its position as one of the world’s greatest ports” but will also help the capital to “establish itself once again as a gateway to world trade.”
“This gargantuan site will create tens of thousands of jobs in our capital and the South East, whilst helping to drive continued prosperity for the rest of the UK,” added Johnson, who also used today’s visit as an opportunity to climb one of the port’s newly erected cranes.
Boris’s visit comes after the announcement last month that UK-based multinational retailer Marks & Spencer plans to build a £200 million distribution centre at DP World London Gateway’s giant logistics park.
DP World London Gateway is scheduled to open in the final quarter of the year.
I wonder if Boris was informed that London Gateway are refusing to recognise a Trade Union