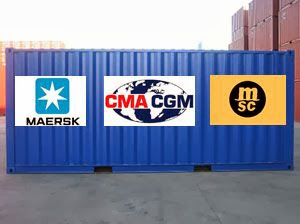 Assuming that the P3 alliance gains international regulatory approval, Antwerp has been identified as one of the chief winners in the North European ports battle.
Antwerp gains, as its Benelux neighbour Rotterdam loses, in the fallout from the P3 network’s planned itinerary, first divulged by MSC last Friday and confirmed this week by partners CMA CGM and Maersk Line.
Although actual terminals within ports have yet to be specified, there are eight Asia-North Europe loops included in the P3 proposals. Rotterdam’s current four weekly Asian import calls would be reduced to two, and export calls would fall from five to just two.
Meanwhile, at Antwerp, under the P3 presentation, weekly import calls would remain at two ,while export calls would double to two.
Understandably, Antwerp has declared its pleasure at the announcement. Port authority chairman Marc Van Peel said: “Such a strong presentation in the P3 network proves that the three largest container shipping companies in the world are confident of the strength which our port has.”
And as if to rub salt in the wounds of its Dutch rival, a pay and conditions dispute at APM Terminals’ Rotterdam facility meant that the port lost an early opportunity to welcome a Maersk Line Triple-E ship last week when the 18,000teu Mary Maersk was diverted to Antwerp.
The dispute centred on the pay and conditions of workers who will transfer from APM Terminals’ existing Maasvlakte terminal to a new facility it is constructing on the Maasvlakte II, and saw boxes build up at the port and importers reporting difficulties in getting containers released.
However, today, the port operator and the FNV and CNV unions announced that a new collective labour agreement had been signed that will continue to the end of 2017.
On its maiden call at Antwerp, at the PSA Terminal on the west bank of the Deurganckdock, the Mary Maersk did not experience any navigational problems – as seen in this video – following the recent deepening of the River Scheldt, and its cargo operations were completed smoothly.
The Triple-Es will be deployed on the Albatross/FAL1/AE1 loop of the P3’s Asia-North Europe service, which has a scheduled call at Rotterdam, but with the unscripted call of the Mary Maersk, Antwerp has proved it can handle “the biggest ships the world has to offer”, enthused the port authority’s CEO, Eddy Bruyninckx.
Indeed, Antwerp’s inland position, once seen as a disadvantage compared with the seaport of Rotterdam, is now viewed in a positive light, according to Mr Bruyninckx. “Goods can not only be brought further inland once they are in port, they can be handled in various ways before efficiently being transported to their final destinations in the European hinterland,” he said.
Nevertheless, 15th-world-ranked Antwerp has a way to go to catch its Netherlands rival, handling 8.6m teu in 2012, versus 11th-ranked Rotterdam’s 11.9m teu.
The rivalry between the two ports is likely to be partly reflected internally among the P3 members as they discuss which terminals to call at. Maersk Line’s sister company, APM Terminals, is making a huge investment in its Maasvlakte II facility, which is expected to be the most technologically advanced in the world, and the design of which is in part predicated on servicing the Triple-E vessels. MSC has long centred much of its north European business in Antwerp, and the MSC Home Terminal, which it operates in conjunction with PSA Hesse Noord Natie, has an annual capacity of some 3.5m teu.
Its only drawback is that vessels have to pass through the Berendrecht Lock, which although the largest in the world has an operational draught limit of 13.5 metres.
A similar conflict of interest may also develop in Bremerhaven, which is set to receive six import calls a week from the P3. Both APM Terminals and MSC have competing facilities.

The Port of Antwerp has welcomed the news that the P3 network will be using the port as its European platform for trade, but where will the P3 shipping alliance of Maersk Line, MSC and CMA CGM, leave other European ports?
Unconfirmed rumours anticipate that APM Terminals and Hutchison Port Holdings will get P3 traffic in Rotterdam’s Maasvlakte. But if this proves to be the case questions have been raised on where this will leave the new DP World-led Rotterdam World Gateway Maasvlakte terminal in which CMA CGM is a share holder.
APM Terminals, HPH and DP World all refused to comment on the issue at this time.
All three P3 partners have connections with terminal operators: Maersk is connected to APM Terminals through the AP Moller-Maersk Group, MSC to Terminal Investments Ltd (TIL) and CMA CGM To Terminal Link, and each has its own favoured ports.
When the alliance was set up, the Global Shippers’ Forum expressed concern about the potential of the P3 alliance to eliminate effective competition in the world's main liner trades and the same applies to ports and terminals.
The question of who will win and who will lose is important because the alliance could reduce the number of terminal calls per port, which has significant consequences for the associated terminal operators.
The P3 alliance will operate a fleet of 255 ships with total capacity of 2.6m teu on 27 service loops in the Asia-Europe, trans-Pacific and trans-Atlantic trades. The alliance – which still has to be approved by regulatory authorities in Europe, the U.S. and China – is due to be launched in spring 2014.