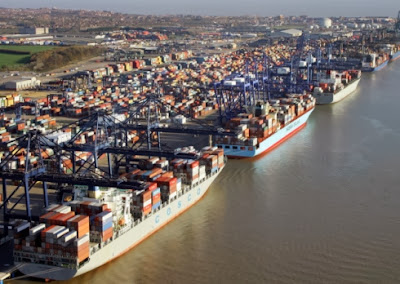 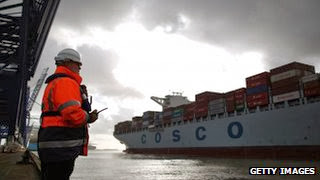 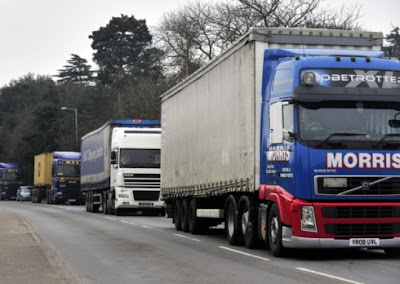 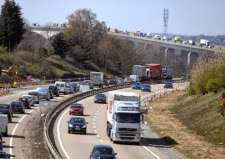 The government should do more to support the growth of UK cargo ports by tackling bottlenecks in local transport links, MPs are urging.
The Commons Transport Committee said ports were vital to UK prosperity but were not being given enough priority.
The UK was at a disadvantage to other EU countries, it suggested, and there was inconsistency in who should pay for road improvements around terminals.
Officials said they were investing in new schemes to benefit port users.
The UK commercial port sector is one of the largest in Europe, employing about 117,000 people.
Freight traffic demand has begun to recover in the past two years after a sharp fall caused during the recession although trade - two-thirds of which is based on imports - remains volatile.
'National assets'

Tuesday's report said ports were "national assets" essential to the "economic wellbeing" of the country and there was potential for substantial expansion to meet future demand.
But the cross-party committee suggested the Department for Transport could "do more to promote ports' interests within government and internationally".
It said changes to the powers of local government over strategic transport planning since 2010 had "made it harder for UK ports to ensure projects of strategic importance enjoy the kind of priority they deserve".
The report cited continuing delays faced by hauliers in getting to the Port of Liverpool, Hull, Heysham and Felixstowe as evidence of the need for more concerted action by the government.
"Local bottlenecks remain a key concern to many ports," Louise Ellman, the Labour MP who chairs the committee, said.
"Ministers must challenge decisions by local bodies where they fail to prioritise improvements in port access over other, less strategically important, schemes.
"While clear in principle, government policy on who should pay for major new transport infrastructure serving our ports remains conceptually flawed and is applied inconsistently around the country."
A14 row

Port operators, it added, should not be expected to "pick up the entire bill" for road improvements around ports where such projects would deliver "wider economic benefits".
While the MPs said they favoured the current mixed model in which both the government and operators contributed to projects, in consultation with local authorities, it said policy must be consistent.
"While some ports have contributed towards transport schemes to improve access, others have not and the differences in approach have not been explained or justified," the report said.
The government is already reviewing current guidance - under which port operators and other businesses are expected to pay mitigation costs for any transport improvements which disrupt existing road and rail users.
Unlike many ports in Europe, which are state-owned, most ports in the UK are privately run and do not qualify for state subsidies under European Union state aid rules.
'New capacity'

But support is provided within the existing EU rules in certain shipping sectors where UK operators are judged to directly compete with European rivals.
"Ports are vitally important to the economy and have been investing in new capacity throughout the economic downturn," a Department for Transport spokesman said.
"The government is complementing this by investing in a range of infrastructure projects that will benefit port users."
Proposals to pay for an upgrade of one of the most congested sections of the A14 - which links Felixstowe with the Midlands - by building a new toll road north of Cambridge have proved controversial.
Lorries could be charged £3 and cars between £1 and £1.50 for using the 12-mile stretch of toll road, although it would be free overnight.
Local MPs and business organisations have said forcing hauliers to pay to use the road during the day would damage the port, the UK's busiest container facility.
Gary Hodgson, chief operating officer for Peel Ports Group, which operator of Liverpool and Heysham ports, said it welcomed the report.
"Peel Ports believes that the transport planning process as it stands is unnecessarily complicated and in desperate need of streamlining. Too often layers of complexity make for suffocatingly long and unnecessary delays which can have adverse effects on local economies and businesses. The lengthy and convoluted planning process for the Heysham M6 Link Road is a case in point."