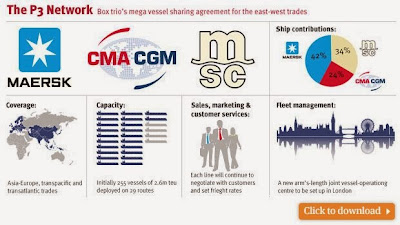 The International Longshoremen’s Association (ILA) has urged theFederal Maritime Commission (FMC) to step in and block the proposed P3 Network calling the agreement a clear attempt by the three carriers involved to “dictate the marketplace”.
In a letter sent to the Commission this week, ILA president Harold Daggett said that if the new alliance is approved then it “would present an unprecedented risk of anti-competitive practices”.
“Unlike vessel-sharing agreements between smaller carriers that are designed to enable those carriers to compete in the marketplace, the P3 agreement represents an attempt by three of the largest carriers in the industry to dictate the marketplace,” declared Daggett.
“As president of the largest labour organisation representing longshore workers in the country (US), I can assure you that the agreement presents a clear danger to workers and their families.”
Concerns voiced by the ILA have been echoed by regulators in both the European Union and in China. However, the FMC, who will accept comments on the P3 Network up until Friday, is keeping an “open mind” on the agreement, according to the JOC.
The proposed P3 Network, consisting of Maersk Line, CMA CGM and Mediterranean Shipping Company(MSC), will create the largest ever alliance to operate on global trades. It will offer a total of 29 loops, served by 255 vessels initially, and a capacity of 2.6 million TEU on the three major trade lanes, Asia-Europe, Trans-Pacific and Trans-Atlantic.