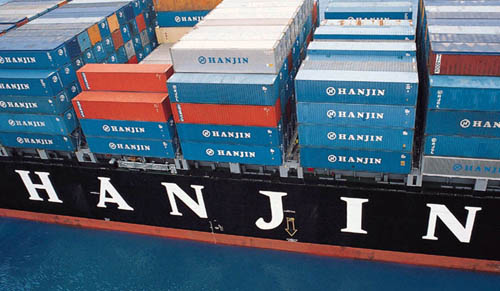 Hanjin Shipping is planning to invite Evergreen Line to join the CKYH Alliance to improve that network’s competitive posture, South Korean news agency Yonhap reports.
The announcement comes as the South Korean carrier, the eighth largest in the world by fleet size according to Alphaliner, has outlined a plan to shed underperforming assets and non-core businesses to bolster its bottom line.
Earlier this year, Drewry Maritime Research characterized Hanjin, as well as fellow Korean container line Hyundai Merchant Marine, as having “their backs against the wall with mounting debt and piling losses.” The analyst said at that time that it expected Hanjin to continue to post losses because of weak fundamentals and high interest costs.
Indeed, Hanjin’s loss widened in the third quarter of 2013, as the company posted a net loss of 317.6 billion won (about US$299.3 million), compared with a net loss of 47.3 billion won in the same period last year.
The ocean carrier’s president and CEO, YM Kim, resigned in November; saying he was taking responsibility for the company’s continuing losses.
Among the actions Hanjin is planning are disposal of older container ships, cutting or restructuring unprofitable routes and other cost-cutting in its container business. It also intends to cut back on its bulk business or exit the business entirely. Altogether, the company anticipates a positive financial impact of 372.9 billion won through these measures.

The Mega-Ship Arms Race: CKYH, G6 and P3
Full-size chart
Moreover, shareholder Korean Air has announced plans to sell off assets worth 3.5 trillion won and other steps not only to improve its own finances, but also to make it possible for it to help the affiliated ocean carrier. The airline has indicated it could lend Hanjin an additional 150 billion won, to supplement the 150 billion won loan it provided earlier this year, if it can secure additional lending from banks. It also wants to take part in Hanjin Shipping’s paid-in capital increase plan, Yonhap reports.
An expansion of the CKYH Alliance — whose members are COSCO, “K” Line, Yang Ming, and Hanjin — to include Evergreen had been suggested as one potential response to the competitive threat posed by the new P3 Network among CMA CGM, Maersk Line and Mediterranean Shipping Co., and the subsequently announced expansion of the G6 Alliance on the east-west trades.
Adding Evergreen would boost capacity for the CKYH Alliance, which is lagging both the P3 and G6 in the new mega-ship arms race, according to SeaIntel. Evergreen is the fourth-largest container line by fleet size, according to Alphaliner, and it has already taken delivery of the first of 10 13,000-TEU ships. The carrier, which already cooperates closely with the CKYH Alliance but is currently unaffiliated, has not yet commented regarding the invitation. 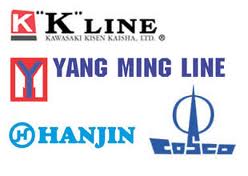 HanjinShipping, the world’s ninth-largest box carrier, is seeking to restructure its business by shrinking its fleet and may invite Evergreen Line to join the CKYH alliance. The proposals are part of the South Korean carrier’s efforts to revive its container shipping division, whose operational loss more than doubled to Won191.8bn ($180.8m) in the first nine months of this year from the year-ago level of Won90.6bn. Hanjin confirmed in an emailed statement that it is reducing the size of its boxship fleet — which, according to Lloyd’s List Intelligence, comprises 111 boxships with total capacity of 582,384 teu — by 20%. To do so, Hanjin Shipping will redeliver some vessels chartered in at high rates and wind up unprofitable routes. However, the actual reduction might not be as significant as the headline figure suggests. When evaluating its target, the carrier has taken into account its 2009 sales of 13 elderly ships of 4,000 teu-5,000 teu each to Korea Asset Management, a government-controlled restructuring specialist. The ships were then leased back to Hanjin. At the same time, Hanjin is considering whether to invite Evergreen to join the CKYH alliance, consisting of Cosco Container Lines, K Line, Yang Ming Marine Transport and Hanjin, in an attempt to maintain economies of scale. The Taiwanese line and CKYH jointly operate eight service strings from Asia to northern Europe and three loops from Asia to Mediterranean via space swaps and vessel-sharing agreements, so in some ways Evergreen seems a natural partner. It has also worked with individual members of CKYH in regional, transpacific and transatlantic routes. It said in a statement: “Evergreen is always looking at operational ways to enhance service to customers and to improve vessel utilisation. We don’t rule out any options, including joining an alliance or maintaining the status quo.” Nevertheless, it is not certain whether joining the alliance would necessarily benefit Evergreen. It also has individual agreements with other major carriers including Maersk Lines, CMA CGM and China Shipping Container Lines. “I am not sure they want or need to join as a CKYH member,” said Alphaliner executive consultant Tan Hua Joo. “They can still co-operate with CKYH as an independent carrier.” If the tie-up does go ahead, the enlargement would be CKYH’s response to the P3 network proposed by the world’s three largest carriers, Maersk, CMA CGM and Mediterranean Shipping Co, which could come online next year if it receives regulatory approvals. The G6 alliance — comprising APL, Hapag-Lloyd, Hyundai Merchant Marine, MOL, NYK Line and OOCL — has unveiled its own plans to expand to the transatlantic and Asia-US west coast trade lanes to improve its competitiveness against other alliances. Separately, Hanjin Shipping, which also owns large dry bulk and tanker operations, plans to scale down its oil and chemical-carrying businesses to improve its operating results. It is seeking to earn Won300bn from selling parts of its dry bulk operations and stakes in terminals at home and abroad and Won88.7bn from disposing of buildings and stock holdings. Altogether, Hanjin Shipping hopes to raise Won2trn from asset sales, loan and equity financing, to repay Won1.2trn in debt due in 2014. The carrier, profitable in only three of the 19 quarters since 2009, is saddled with debts and struggling to improve its liquidity. As of end-September, its assets-to-equity ratio reached 1,180%. Korean Air Lines, part of the Hanjin Transport group, has since October lent Won250bn in two deals to Hanjin Shipping Holdings, which controls the carrier. The parent could merge with Hanjin Shipping to smooth the restructuring process as previously reported. The airline could provide another Won150bn in loans and inject Won400bn into Hanjin Shipping’s capital-increase plan in the first half of next year. The latter would eventually make Korean Air Lines the carrier’s largest shareholder, Yonhap News Agency has reported.