According to a leading UK haulier overweight containers are “not necessarily the biggest issue” in the intermodal supply chain: the danger from poor stowage is in its opinion a greater threat to safety in the supply chain.
Speaking at the recent Multimodal event at the NEC, Birmingham, Andrew McNab, marketing director for Maritime Transport, highlighted the daily problems faced by drivers from transporting badly loaded boxes on the roads to and from the ports.
Indeed, with the International Maritime Organization’s draft amendments to SOLAS chapter V1, requiring the mandatory verification of container weights prior to shipment, passing through the final stages of approval and expected to be enforced by 2016, attention is now turning to the inherent problem of container stowage.
According to Mr McNab, Maritime Transport operates a fleet of 1,000 trucks out of 16 sites in the UK and handles over 10,000 container moves a week, thus it can comment with some authority on the issues.
Maritime is not complacent about the problem of overweight containers and if drivers have any doubts they are encouraged to visit the weighbridge and are authorised to refuse to load at a port or a shipper’s yard if they have real concerns.
The real problem for hauliers, Mr McNab told the conference seminar, is an overweight axle caused by a poor load distribution of the container.
He said that especially with regard to import containers, that “90% of the time we don’t know what we’re carrying and we have no idea how the load has been packed or the weight has been distributed”.
This doesn’t mean that “exports are good and imports are bad”, he told his audience. “We have also seen some shocking packing by UK exporters which has caused some serious accidents.”
Mr McNab gave an example of a driver collecting a box from a container terminal and the early signs of an overweight or badly stowed container.
He said: “You have from the point you picked up the container to the terminal gate to test this load. Half a mile, if you’re lucky. First, you test your brakes – you get a lot of early information about the behaviour of a load when you brake.”
Thereafter, said Mr McNab, it was down to the “feeling” in the driver’s hands, feet and seat to judge if there was a problem with the box.
He said one rollover incident had occurred just 600 yards from a dock gate, and the cause was found to be that the shipper had packed heavier cargo on top of light cargo in the container, rendering the load totally unstable. 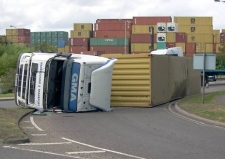 Other examples of cargo shifting due to a lack of dunnage were among many other incidents given by the executive.
At the same seminar, Peregrine Storrs-Fox, risk management director for maritime insurer the TT Club, said two-thirds of cargo claims could be attributed to poor container packing or misdeclaration of weight.
The TT Club has long warned of the consequences of unsafe and badly secured cargo in containers leading in many cases to serious injury and even death.
It says that increased levels of training to maintain and improve the expertise of all those employed to pack containers “is now essential”.