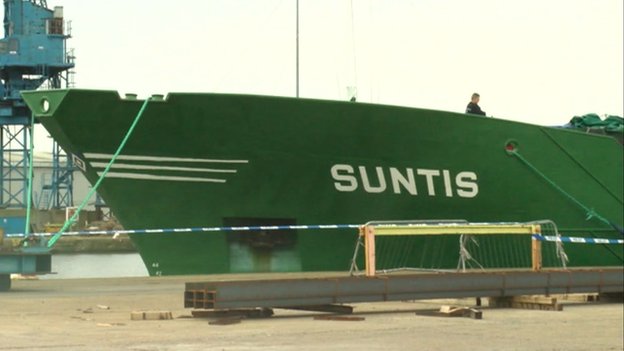 Three workers died after becoming ill on a German cargo ship berthed at Goole docks, police say.
The men were taken to hospital on Monday morning, one died shortly after 07:00 BST and the other two died later.
Police said the men, who had been working on the ship, became ill on the Suntis, which was carrying timber and berthed at West Dock on Bridge Street.
Officers said it was too early to say what caused the men's deaths and have not released details of their injuries.
The men, who have not been named, were a 60-year-old German and a 33-year-old man from the Philippines.
The nationality of the third man, aged 38, has not been released.
'Tragic shipboard incident'
Humberside Police said it was working with the Health and Safety Executive and the Maritime Agency to establish the circumstances surrounding the deaths.
Det Insp Emma Heatley, of Humberside Police, said: "All we know is that they've been working on the ship. As a result of that they've been taken ill.
"It's early days for us to be able to say what's actually the cause of death."
In a statement, port operator Associated British Ports said: "We are continuing to work closely with the relevant authorities.
"Our thoughts are with those affected by this tragic shipboard incident."
on May 27, 2014