On July 21, 2014, the MV Mary Maersk departed Algeciras, Spain with a world record 17,603 twenty-foot equivalent units (TEU), the most TEU’s ever loaded onto a single vessel.
MV Mary Mearsk is the third vessel in Maersk Line’s Triple-E class, which have nominal capacity of 18,270 TEU, although port restrictions have prevented the vessels from reaching full capacity.
“Algeciras has been preparing for full utilisation of the Triple-E for more than a year,” says Carlos Arias, head of the South Europe Liner Operations Cluster. “This included the upgrading of four existing cranes and the arrival of four new Triple-E cranes.”
After departing Algeciras, the vessel was bound for Tanjung Pelepas, Malaysia, which included a trip through the Suez Canal. Arias added that similar upgrades needed to be made at the port of Tanjung Pelepas, and this was the first occasion where both ends were ready. Triple-E nearly fully loaded. Photo courtesy Maersk Line
“It feels very good, and nice memories to look back on at a later stage,” commented Mary Maersk captain, Captain Thorvald Hansen, on the world record feat.
“We were a little excited to pass Suez with such a big load, but everything worked out as planned,” Hansen added.
The MV Mary Maersk is now enroute to China with a slightly lighter load, but by the end of the month will once again be headed west. 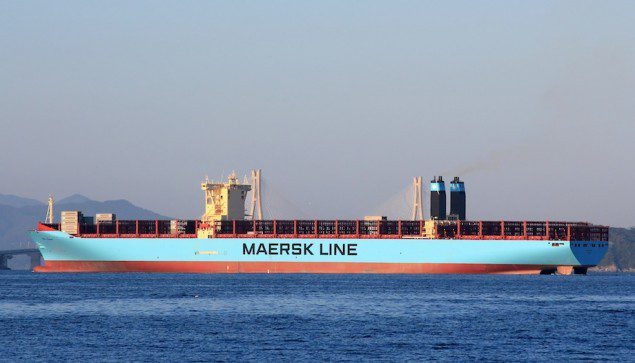