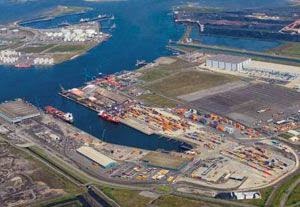 UK – US – Stories about ports from the two countries this week illustrate two completely different sides of the world of shipping. Whilst Teeside’s recent investments in ferry and container terminals have made a record week for freight throughput possible, Californian ports are still apparently in chaos, not from a lack of business but simply the inability to manage the volume of cargo they are witnessing.
Teesport, owned by PD Ports, expanded its two box handling facilities and ferry terminal in 2011/12 at a cost of £16.7 million, and this week had an exceptional week handling a record amount of unitised cargo, exceeding its previous record by handling over 12,000 TEU in a single week. The port’s total capacity is now 650,000 TEU making it the second largest container port in the North of England. Frans Calje, PD Ports Managing Director – Unitised and Portcentric Logistics, commented on the record week:
“This year we have seen a significant increase in container volumes being handled at Teesport following the introduction of two new shipping lines and the growing support of the existing and new portcentric customers that use the port on an ongoing basis. Last week we handled the highest amount of containers at the Port which was supported by additional sailings and peak season volumes. Our team at Teesport has performed exceptionally well with the uplift in volume and this week has shown what the Port is capable of.”
Meanwhile the situation described in our last article regarding congestion at the ports of Los Angelesand Long Beach looks set not to be resolved in time for Thanksgiving and the Christmas holidays. Despite a plan to introduce thousands more chassis to convey the huge stockpiles of containers post clearance it seems the wheels are, quite literally, moving too slowly.
Importers report two to three week delays for transport after cargo has been passed by Customs and road haulage outfits are blaming the ports, rather than a lack of equipment, for the extreme delays. Hauliers say that the time taken to load the trailers and the amount of congestion are the main causes of the problems and that it is unlikely that many goods will now arrive and be released in time for the holidays.
Whilst the hauliers turn business away because of the backlog, describing the situation as ‘the worst ever seen’ some importers have been forced to air freight in emergency supplies whilst their goods languish somewhere in the docks, often in off-site car parks being used as makeshift storage, with added extra delays associated for longer recovery.

Chronic congestion at container terminals in Asia, the US and Europe has provided some overdue good news for boxship owners, with many smaller ships that would otherwise have been consigned to lay-up now finding employment.
According to the latest Alphaliner idle tonnage report, there were just 114 containerships laid-up as at 20 October – a four-year low, and especially surprising given the start of the winter slack season.
Port congestion aside, Alphaliner notes that ocean carriers are “adamant about keeping services open for the winter season”, and the suspension of one G6 Asia-US West Coast service and one Asia-US East Coast service from early next month remain the only formal announcements.
It said: “No other main carrier alliance will make ‘official’ service cuts, as shipping lines prefer to rely on skipped sailings to manage the next two months’ low-demand scenario.”
The analyst added that after the withdrawal of 12 Asia-Europe sailings in October, the alliances were planning “at least” 12 more blanked voyages in November/December, with all lines likely to cancel some sailings during this period.
However, managing capacity by blanking sailings has so far failed to address the decline of spot freight rates on Asia-Europe, which have plunged to below $700 per teu from $1,400 at the beginning of August, making the 1 November general rate increases critical.
Alphaliner said that the alliances’ capacity management efforts had not been helped by the Asia-North Europe inducement sailings operated by Zim Lines’ 10,062 teu Zim Tianjin, which, following the formal withdrawal of the Israeli carrier’s liner service on the trade, now offers approximate monthly ad-hoc sailings.
Unfortunately for containership owners, the strong demand for capacity has not been reflected in any significant hike in daily hire rates, and the charter market also has concerns about what is over the horizon.
A sustained period of significantly lower bunker prices could tempt operators to speed up ships – a threat to containership owners if that means fewer ships are required.
However, arguably a bigger threat comes from mega-alliances and carrier mergers. For example, 2M partners Maersk Line and MSC currently charter-in 44% and 58% respectively of their fleets, and given the size of their fleets are the most active players in the charter market.
Under the 2M alliance, both Maersk and MSC will look to off-hire as much surplus capacity as possible once the east-west services are fully integrated – Maersk’s previous strategy was to fix ships on a relatively short-term basis with options to extend.
Elsewhere, Hapag-Lloyd is making the final preparations for its takeover of CSAV’s container services.
The Latin-American specialist currently charters 62% of its fleet and Hapag-Lloyd will be looking to off-hire as much tonnage as possible in order to achieve the targeted $300m a year in cost savings.
Hamburg remains the nerve centre for containership chartering: next week’s annual Eisbeinessen festival negotiations will be a big challenge for owners.

Holiday shipments come to a halt at Long Beach

It's a busy time of year for the Port of Long Beach berths, which are congested
The Port of Long Beach (POLB) has been battling congestion for the past few weeks, and things don’t seem to be improving with container ships waiting at anchor for a berth.
The cargo congestion comes at a busy time of year, with the holiday season just around the corner – something which has not helped matters, a spokesperson for the port told Port Strategy.
“We are in the midst of the peak shipping season, with imports heading across the country for the end-of-the-year holidays. Volumes are much higher than expected – very near the highest monthly totals ever.”
Last week saw seven container ships waiting at anchor because there were no open berths for them, the spokesperson explained. “Ordinarily it’s rare for container ships to wait an entire day at anchor. But some of these ships are waiting several days.”
However, it’s not the worst cargo pile-up the port’s ever seen. In 2004, “a dozen or more ships were backed up and at anchor many miles down the coast”, the spokesperson told PS.
A chassis shortage has been identified as one of the problems, so the port is working with chassis leasing companies to bring chassis to the region. But, it seems train and trucker shortages are also adding to the problem.
“There is greater demand throughout the economy and goods movement companies are racing to keep up. It seems almost inevitable now that some shipments may arrive in stores too late for this holiday season,” the spokesperson added.

Port of Los Angeles
Worsening port congestion in Californian ports prompted by rising container volumes have forced rising number of vessels to anchor outside the neighboring ports, Long Beach and Los Angeles.
The idle vessels have clocked up to two-week delays offshore as port authorities cope with efforts to speed up movement of cargo off the docks, according to Reuters.
Retailers are rerouting goods to other ports, and some shoe and clothing companies have resorted to air transport, the Associated Press cited Nate Herman, vice president of international trade at the American Apparel & Footwear Assn as saying.

“The delays are increasing, they are not getting better,”said Herman.

The Port of Long Beach has convened a Congestion Relief Team to address congestion issues.
According to Dr. Noel Hacegaba, the Port’s Chief Operating Officer in addition to bigger ships bringing more cargo, “chassis imbalance is a big part of the congestion issue” .
Among the causes behind the congestion issue is also the failure to reach a new labour agreement between ILWU and the Pacific Maritime Association (PMA)
Matt Shay, President and CEO of the NRF said that the parties should at least extend the expired contract through November “in order to reinstate arbitration agreements, which are preventing many issues at the ports from being addressed.”
According to Shay, the U.S. retailers are currently going through ”the heaviest shipping season of the year,” preparing for the coming holidays, which is a ”make it or break it” time for retailers and merchants.
The delays, worst since 2004, are expected to be resolved mid-November.