The proud wife of a docker.. 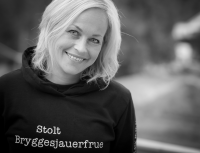 It's way over due, I know. I have been thinking (and talking) of making the blog international. But with a full time job and two kids under the age of three (and living with a docker), I've been stuck at "Where the xxxx do I start?" and "How can I explain the situation as short as possible?" It seems like an impossible task and I have decided to introduce myself first, and give a brief explanation of what I do with my blog. I will continue blogging in Norwegian as the battle is ongoing, but I will post an English translation every now and then as well as summaries of the conflict(s) in order to keep you updated. There is a "google translate"-button in my blog - I know it sucks - but you'll get the essence of the content. Feel free to ask if you have any questions.

I started blogging back in November '13 after port owners and employers started a smear campaign of the Norwegian dockers through the media. It started in April '13. The public of Norway where served with lies and condescending accusations. There are about 300 dockers in Norway and I felt that they never were heard or got the chance to defend their honour and rights. If they were lucky; the union got a couple of lines in the end of an article.
Direct translation of my blog name is "A docker's wife". I'm not really a wife (no pressure, Roar), a partner for now.
My intention with the blog was (and is) to refute claims and tell the truth as it is. The dockers are claimed to be inefficient and lazy. Overpaid; they don't work for their money. The smear campaign is leaded by the Port Authority of Oslo which is a municipal enterprise. They are the owner of the largest port in Norway. This is where "my" docker works.
All in all it is pretty easy to see through the claims that their main goal is to use cheaper (underpaid) labour. I'll get back to this is later posts. Some of the accusations are so ridiculous I'll even guarantee you a good laugh.

On the behalf of Norwegian dockers I take the liberty to thank all of you supporters out there!

Sincerely yours,
Silje
Damn proud to be a docker's wife

WHAT IS IT ABOUT THE DOCKWORKERS?

By guest blogger Guri Waalen Borch
In the globalized reality that we live in, where the goods we buy often travel around the world before reaching us, it is a paradox that many of those who handle them at the ports are not valued even with fair and stable working conditions. Not only do they find themselves in conflict in many countries, they are also smeared. If they decide to do something about their insecure, unfair and/or unstable conditions, they will easily be called "lazy" by common men and women.
I had not thought much about dockworkers until I spoke at the Welfare Conference here in Norway in October this year. The well known blogger Silje Kjosbakken (known as "BryggesjauerFrue- a docker's wife") was also one of the speakers there, she talked about the ongoing dockworker conflict. It goes on between Norwegian dockers and Holship, Nor Line and other employers who want to use workers without collective bargaining agreements.
Employers want to use their own workers, who stand without those rights, meaning that, on a continuum between labor rights and social dumping, we could be getting closer and closer to the latter. Who earns from this?
Employers, terminal companies.
Which brings me to a conflict in Costa Rica that I came across by accident the other day. Out of curiosity, I started looking into it. In 2012, former president Laura Chinchilla gave harbor concession to the terminal company APM, affiliated with the (Danish) Maersk Group. I have read claims that the future billion dollar container terminal project is a risk to APM; that it is really doing Costa Rica a favor.
Is that true? The dockworkers in Limón, Costa Rica, do not think so. The 33 year concession has granted APM exclusive rights to handling container traffic.
I must mention, Limón has quite an interesting history. The United Fruit Co. opened for business there in 1899. Most of us know that this multinational company used brutal tactics, bought protection and suppressed union organization. Sounds familiar? United Fruit controlled the docks, the loading, shipping and marketing of the fruits, as described by Costa Rican resident Sarah Corbett Morgan here. The port was finally nationalized in 1966, after being operated by an oppressive multinational corporation.
It is also worth mentioning that in the port of Caldera, Costa Rica, which was privatized in 2006, at least two thirds of the workers lost their jobs, and the ones who kept them, lost two thirds of their salaries. According to the president of the International Longshore and Warehouse Union (ILWU) Robert McEllrath, the precarious working conditions resulting from this privatization have caused 46 deaths at the docks.
The dockworkers' union, SINTRAJAP, went through severe abuses from former Costa Rican government when, in 2010, the government had the union's executive board replaced. This happened after the following statements in 2009: "The Government is declaring war to the trade unions of Limón and invites the private entrepreneurs to close ranks in order to allow the concession of the new Caribbean dock to a private company. In two or three weeks the Government will be putting a new dock in Limón out to tender." In the words of the Minister of Transport, "this will be the first shot in a battle that is going to last all year and one of whose aims is to get rid of the dockworkers' union in the Caribbean". According to the allegations in a complaint to the International Labor Organization (ILO), the Minister met with representatives of the chamber of employers and told them in the harshest terms that it was a war in which no quarter would be shown.
Later, the Costa Rican Supreme Court ordered the previous executive board to be reinstated. ILO also wrote: "The statements reported seem to have gone beyond the mere exercise of freedom of speech by explicitly urging members to resign from the union and by advocating a new trade union system." ILO also uttered the following:

"although the Government states that there is no anti-union campaign and that the steps it took had no such anti-union objective as putting aside the trade union, it does not deny the statements cited in the allegations which, in so far as they are liable to encourage workers to leave the union or have the effect of destroying the union, are contrary to the right of workers to join the union of their own choosing, in accordance with Article 2 of Convention No. 87. The Committee emphasizes the importance that the authorities' statements to the media should not seek to influence the right of workers to join organizations of their own choosing."

At the moment, dockworkers in Limón are receiving support from other trade unions, but many men and women in the street, as according to statements in social media, still think that these workers' problem is that they are lazy and that the executive board of SINTRAJAP is virtually eating money. It is a sort of rhetoric that is seen in Norway, Costa Rica and world wide, as dockworkers are concerned.
In my head, I can see a hard working docker standing next to the Maersk Group, a huge transnational company, looking to see if he will keep his job and if so, how much of his salary he will keep.

How Costa Rican politicians over the years have made this little man into a problem while finding it perfectly fine that, for 33 years, Maersk be in control of an important harbor area, involving as well possible environmental damage, tells me: People with power also have the power over how people see reality. Governments and powerful companies can transform realities in people's heads. That is why blogs like BryggesjauerFrue's, showing a different reality, are so important.

Guri Waalen Borch is 35 years old, she has a Masters degree in Peace and Conflict Transformation from the University of Tromsø, Norway and has a big social commitment.