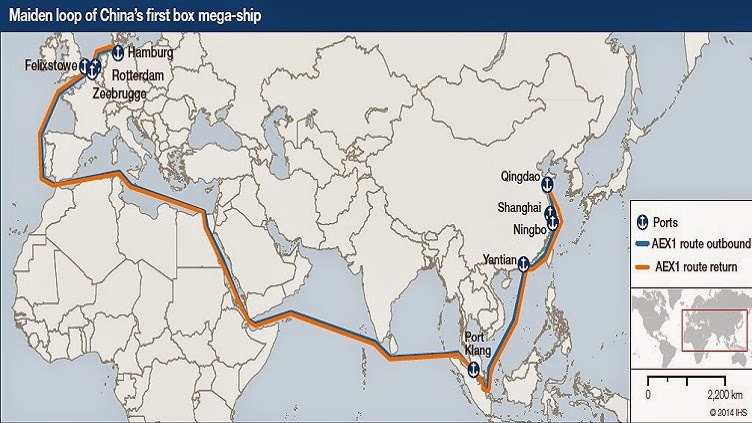 This is the route that the world’s largest container ship CSCL Globe is taking on its maiden voyage. It left China’s Tianjin Port on 2 December.
The vessel will call at Qingdao in Shandong province, Dalian in Liaoning province, Felixstowe in England, Rotterdam in the Netherlands, and Hamburg in Germany during its 70-day voyage.
CSCL Globe is the first of five box ships of 19,100teu ordered by China Shipping Container Lines (CSCL) in 2013.
It was built at Hyundai Heavy Industries in South Korea and classed by DNV GL.
CSCL currently operates nearly 80 shipping routes covering Asia, Europe, North America, West Africa, and Australia. By mid-2014 its 148 box ships were able to carry an aggregate 656,000teu.
This infographic first appeared in IHS Maritime’s Fairplay Magazine, xx date 2014. To subscribe to one of our magazines, visithttp://magazines.ihs.com/Maritime/ 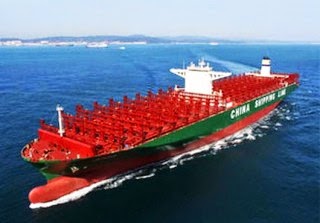 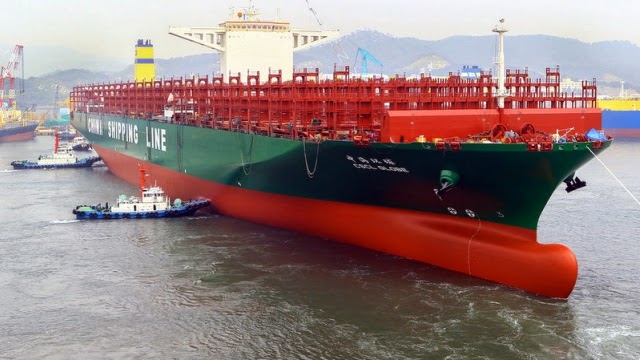 CSCL Pacific Ocean at Hyundai Heavy Industries.
The second installment of the new world’s largest containership by cargo carrying capacity, CSCL Pacific Ocean, has officially been named and delivered by the Hyundai Heavy Industries shipyard in South Korea.
CSCL Pacific Ocean is the second vessel in a series of five 19,100 TEU giants for China Shipping Container Lines. The vessel was named during a ceremony held on December 19th at Hyundai Heavy Industries. Following the ceremony, the vessel was expected to sail out immediately and join the lead ship in the series, CSCL Globe, on the Asia—Europe loop. The CSCL Globe was delivered in November is currently in the midst of its maiden voyage.
With a 19,100 TEU capacity, the vessels are the world’s largest containerships by TEU capacity, beating out the 18,000+ TEU Maersk Triple-E’s for the title. The vessels measure 400.0 m in length, 58.6 m in width (.4 meters less than the 59 m wide Triple-E’s) and 30.5 m in depth.
The CSCL Globe and CSCL Pacific Ocean feature a single 77,200 bhp electronically controlled main engine, which enhances fuel efficiency by as much as 20% by automatically controlling fuel consumption according to the ships speed and sea conditions. At 17.2 meters tall, the MAN B&W 12S90ME-C Mark 9.2 type low-speed main engines actually set the record for being the largest marine engines ever built.
The five vessels were ordered by CSCL back in May 2013 for a total cost of $700 million.