APM Terminals Algeciras yesterday approved a new tool to improve security and optimize operations on large container ships like the one that ended up in the dock yesterday Juan Carlos I, the MSC Oliver. This is a new safety cage, a collapsible cage upright allowing three stevedores rise at a time and open or close the twist-locks that secure the battery containers are up to a more agile and reliable manner. The leader of the team that devised the new cage is Jose Miguel Gomez, and has recently been recognized by APM Terminals global and Safety Hero.

Gomez works on the container terminal almost since its opening. "From here it was two cranes," he recalled. Always linked to Marina Operations department, it has devised several improvements to elements of the terminal. Now, besides working in innovation, coordinates the operations of works, for example, the 2014 Algeciras project that the terminal is adapted to the dimensions of the large container ships. These ships allow stacking to heights never before seen in the industry and require procedures to increase productivity.

For those same ships thought the new basket. All parties involved in work on the terminal yesterday gave its approval to this tool, failing only use the procedure is processed and put it in the operation. It is a folding cage upright about 50 feet that has nothing to do with the interiors of which are available so far.

Gomez explained that the main objective is to improve safety, as the safety cage features all measures for staff onboard lashing work in the best conditions. But also it will reduce time, because what is done so far in a basket with a bar, now they will three people with their hands, more comfortable and agile. "And besides, when folded, can be moved where needed," said Gomez while teaching yesterday the prototype in one of the ships of the terminal.

But it's not the only idea of ​​the team that has been implemented not only in the terminal dock Juan Carlos I, but in the global network of APM Terminals. At its input list is, for example, a specific load twistlock container as outside makes safer operations and downloading operational folded containers. It has to do with creating extensible lashing bars without screws combined weight and functionality that allow open without breaking tacillas above. These terminals are used in the Mediterranean for three years, and were an invention made in Algeciras.

It all adds up, but the idea which has been recognized as Safety Hero by APM Terminals Global is not neither. During the past two years his team has worked on an innovative hull, already patented in Spain, used to be seen. The idea is simple, but it had not occurred to anyone. Bring high luminescence lights LED technology with a battery powered 16 hours to allow the crane operator see the staff working on the dock at night. And USB charging. "The hull is now under production. We implement it to all staff working in the dock, on boats and in a second phase can differentiate color to each group", she said. 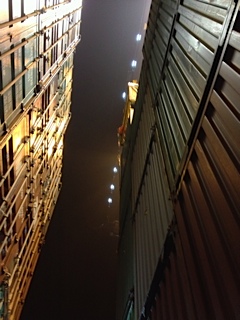 Fritz Merk, Sort + Store GmbH, Essenbach, Germany Dockers live dangerously
Although modern container terminals are highly automated, thereby helping to achieve a major reduction in the risks to life and limb facing their workforces, there is one group which still works under the same conditions, but under steadily increasing time pressures: the stevedores.
As was recently remarked by Lloyds, container ship building has undergone a rapid development in the past few years, but this has not extended to stevedoring systems. Although deck containers are now stacked up to eight deep – a good 25 metres – the lashing and locking techniques remain unchanged. Above the third tier (or the fifth if using lashing bridges), the boxes are interlocked with twistlocks (TWLs).
Since fully automatic twistlocks are still the exception, the TWLs have to be released manually on unloading (and – if using manual TWLs – locked again after loading). This is performed by the stevedoring gangs from the top tier of containers using long operation rods. And – given the constant imperative to minimise berthing times – they are constantly up against the clock.
This makes the stevedores’ job highly dangerous: often they work on bays as they are being unloaded from the gantry crane; night work or poor visibility due to bad weather conditions make matters worse and the operation rods too can present a serious hazard when dropped or discarded. According to the statistics, one in two lashing accidents involves the rod. And such accidents resulting in personal injury abound, as evidenced not only by the statistics, but also by accident insurance premiums, which – in German ports for example – are typically three times as high for stevedores as they are for the yard personnel.
Flying not climbing
Serious accidents have made the need for action abundantly clear. Until fully automatic TWLs become standard – which is unlikely to happen in the foreseeable future given the persistent safety problems with the types currently on the market – a concerted effort needs to be made to make stevedoring safer.
Workers are guided along in narrow pods, enabling the 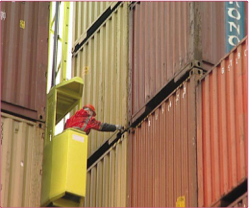 m to reach and release TWLs directly, without using any aids.

This task is facilitated by an entirely new type of lash basket. Instead of the conventional cages which are lowered onto the container stacks, with SORT + STORE’s TPC the workers are guided along both sides of the top container tier in narrow pods, enabling them to reach and release the TWLs directly – without using any aids.
The pods are joined horizontally by a telescopic beam allowing stevedores to work on stacks of 20', 40' and 45' containers. The system is suspended from the gantry crane like a standard container, and additional, optionally available securing devices prevent dropping due to operating errors, etc.The pods are narrow enough to be used in the vast majority of container ships while allowing sufficient freedom of movement for the workers plus extra space for stowing any remaining TWLs or necessary tools. As an added feature, the pods of the TPC S2 type also telescope vertically, so that the stevedores can work through the top container tier while travelling from the land to the seaward side before lowering their pods to the second tier and releasing all the TWLs there on the way back.This reduces unproductive return journeys to the bridge and helps improve economic efficiency.
Beside these routine uses, the TPC has also proved an ideal aid in case of emergencies: when blocked or frozen TWLs need to be released, the time-consuming and extremely dangerous task of ladder climbing can be dispensed with, and the worker ‘flies’ instead directly to the source of the problem complete with equipment, enabling him to deal with it from a secure and ergonomic position.
What does the industry tell us?
SORT + STORE developed the ‘Telescopic Personnel Cage’ (TPC) in close collaboration with the EUROGATE Group. The design principle is protected by the German manufacturer by international patent and has now been certified by Germanischer Lloyd.The lash basket has been and continues to be thoroughly tested at a range of terminals in Europe and USA and is also increasingly used commercially, although this
on May 30, 2015