Blockade against the Oslo Port 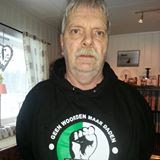 I am posting this on behalf of Svein Lundeng 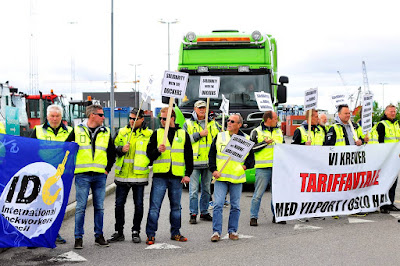 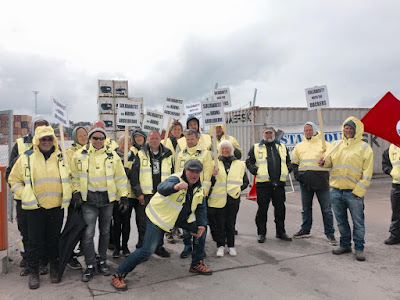 The action happens because Yilport, which is the terminal operator at Sjursøya, not wanting to enter into a collective agreement with Norwegian Transport Workers' Federation (NTF) and dock workers who have been affiliated Oslo Discharge and Cargo Office (OLLK).Already from February has NTF boycotted Yilport and action escalates therefore now up.Yilport for its part does not deny that they want to modernize operations through more automation and that it should not hired workers from OLLK, but rather use the company's own employees and hired temporary workers.- Well they have not killed meDuring a lecture at the Logistics Day 2015 Sarpsborg last week presented the general manager in Yilport Oslo, Eryn Dinyovszky Yilports thoughts about the future. They contained including a strong focus on automation of port operations, and Dinyovszky neither did he deny that dockers are a challenge. 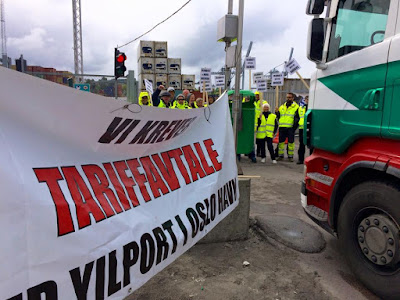 - One of the good things about the first few months is well that the union of port workers have taken life of me, said the American director.Harbour Works and track membership in Oslo Jetty Workers Roar Langaard is in place on the dock, and says that this is not a short political selection.- This is just the start. This is going to be prolonged. We are going to hold on until they realize what they have been doing, he says to MTlogistikk.no.- We take action against Yilport because they will not enter into a collective agreement with us, he says.OLLK bankruptcyThe action comes in light of OLLK last week filed for bankruptcy. NHO believes that the old collective agreement therefore no longer valid. It is wrong, says Langaard.- The agreement concluded between Brygge Workers Association, Norwegian Transport Workers' Federation (NTF) and NHO and the bankruptcy have therefore nothing to say for the deal, saying Langaard.He also dismisses the action is illegal. 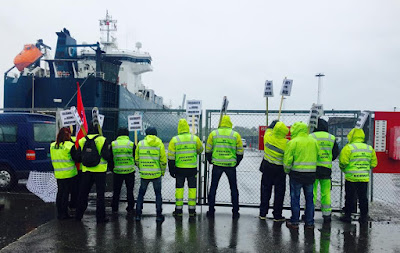 - This is not any illegal action. Yilport were offered to meet us at the State Mediator, but they did not bother to meet up. When these are the funds we have available, he said.Hired temporary staffTaking the job at Yilport Nor has there been any alternative, believes Langaard.- It's not fancy like some positions in Yilport. They use Adecco and hired people over a low shoes. And I do not think so many would like to be employed in Yilport, he said.The operation was terminated at 13 o'clock.- That's what the plan was, to hold on for three hours now the first time, says Langaard.