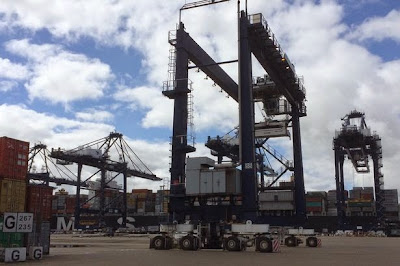 Gateshead's Techservices and Blaydon's Stella Maintenance Technologies have been chosen by Hutchinson Ports UK to carry out a three-year contract. 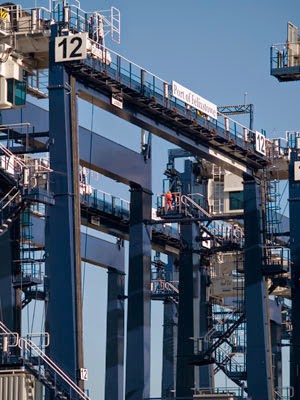 A pair of North East firms have secured a multi-million pound contract which is believed to be the largest of its kind in Western Europe.
Gateshead-based Techservices (North East) Limited and partners Stella Maintenance Technologies have been chosen to convert 54 rubber-tyred gantry cranes at the Port of Felixstowe, from diesel power to full electrification.
The contract with global port operators Hutchinson Ports UK will see both North East firms work on the cranes, which are used to move containers around the port.
Techservices, which leads the contract, is already established as a contractor at the Port of Felixstowe, but had to fight off fierce competition from global competitors across a year-long tendering process.
As strategic partners, Blaydon-based Stella Maintenance Technologies will help Techservices to make sure they meet the technical requirements of Hutchinson Ports’ tender package.
A team of six will provide the electrical engineering expertise necessary for the work, which will begin in June, and another six jobs are expected to be created on the back of the contract.
The deal is part of a strategy by Hutchinson Ports UK to significantly reduce fuel costs and lower the carbon emissions of the entire Port of Felixstowe crane fleet.
Barry Renwick, commercial director at Techservices, said: “This project is the largest Techservices has undertaken in its 36-year history and we are delighted that a project of such magnitude will both protect and create many new jobs in the region. It will also benefit other local companies in our supply chain.”
John Oxley, technical director at Techservices, said: “We are delighted Techservices have been successful in securing this prestigious contract, and that we complied with all the requirements in Hutchinson Ports UK’s competitive tendering process. 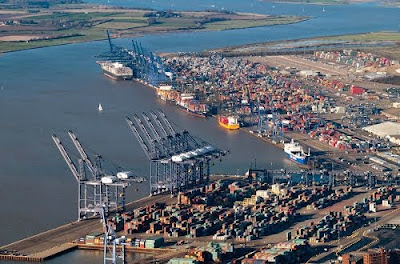 “We’re well aware of the significance of this project within the port industry and the benefits it gives to the Port itself. Techservices have all the experience to manage this conversion of the rubber-tyred gantry fleet, and we’re excited about the potential further growth in this area.”
In addition to the crane conversions, Techservices will also install more than 13 kilometres of steelwork and conductor rails during the three-year project.
Electrical infrastructure will also be developed to connect the cranes to the main 11,000 volt power supply at the port through transformers and sub-stations.
Malcolm Bell, managing director and principal consultant electrical engineer at Stella Maintenance Technologies Limited, said: “During the last five years we have worked very closely with Techservices on a number of technically demanding projects, both for other ports and in general manufacturing facilities.
“This exciting new project will require the combined expertise and skills of both companies in all aspects of project management, electrical and mechanical engineering, logistics and supply, health and safety, regulatory compliance, workforce supervision and leadership.
“New jobs will be created and we will continue our commitment to support existing long-term clients across the North East.” 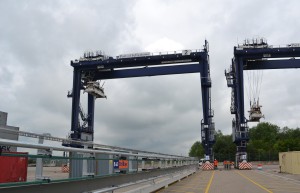 The Port of Felixstowe has taken another step to improve both its operational and environmental efficiency with the introduction of its first electric-powered Rubber-Tyred Gantry Cranes (RTGs).
The four machines, originally manufactured by ZPMC in Shanghai, have been converted from diesel to electric primary drive in the first project of its kind in Western Europe. The work was undertaken by Kalmar, part of the Cargotec group.
Commenting on the initiative, Paul Davey, Head of Corporate Affairs, Hutchison Ports (UK), owners of the Port of Felixstowe, said:
“The Port of Felixstowe is fully committed to providing the highest levels of operational performance whilst at the same time reducing the impact of its operations on the environment. This pilot project to electrify four RTGs will help us achieve both objectives. The greener machines are the latest in a programme of measures which has seen carbon emissions at the port cut by 12 percent since 2007, keeping us on course to achieving a target reduction of 30 percent by 2017.”
The electric RTGs are expected to make a significant contribution to further increase carbon savings. It is estimated that each machine will deliver energy savings of at least 45 percent compared with conventional diesel machines. With a comparable reduction in emissions, the conversion programme will also contribute to improving air quality in and around the port.
The conversion project involved installing electrical infrastructure along the full 217m length of two of the port’s RTG container storage blocks. The RTGs themselves were modified to install an automatic drive-in collector unit to connect to the electric supply as well as fitting new operator controls and a conductor bar system to supply power to the electric motors.
Importantly, the design allows RTGs to move between storage blocks and connect quickly and easily to a new electricity supply. This retains the inherent advantage of RTGs over rail-mounted alternatives, allowing greater flexibility and an improved ability to match equipment to variable patterns of demand.
The converted machines have also been fitted with an auto-steer function when connected to the conductor bar system through which the electricity is supplied. This system reduces the demand on the driver, minimizing fatigue and allowing him to focus on the efficient movement of containers.