Are night shifts killing me? 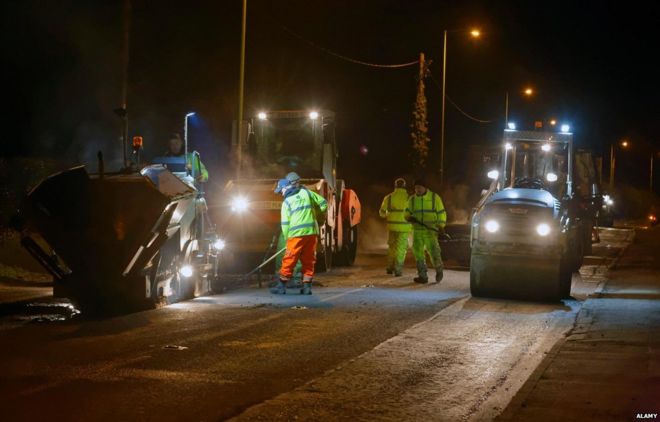 There has been a steady stream of studies over recent years that suggests long-term night-working is extremely bad for your health. It's a sobering thought for those who have to work at night, writes Sarah Montague.
I've been getting up in the dead of night to go to work for years. It's the price for presenting the Today programme - and one I'm happy to pay.
But I've always wondered whether there is a longer term cost. Could my early rising, when my body is screaming at me to go back to sleep, be doing more serious and permanent damage than can be reversed by a good night's sleep?
I'm just one of 3.5 million people in the UK who do shift work. Many are on much longer hours and work through the night.
It's not just night workers. Fifty years ago adults typically had eight hours sleep. Now the average is 6.5 hours.
Too many of us think of sleep as an indulgence. When my alarm clock goes off at 3.25am, I always promise myself I'll catch up later. After all, I'm only tired.
But sleep is as essential as breathing and eating. It's when our brains process what we've done during the day and lay down memories. And when our bodies carry out some basic maintenance.
We've now learned that even when night-workers get plenty of sleep, it's at the wrong time.

It had always been assumed that our body clock would adapt to the demands of working at night, but as one of Britain's leading sleep experts, Prof Russell Foster, from Oxford University, says "the really extraordinary finding across a whole range of different studies, is that you don't adapt".
And that means those working at night for long periods are more likely to get a range of serious diseases from type 2 diabetes to coronary heart disease and cancer.
Some scientists believe that anyone arriving at work at 4am - as I do - has an ability to process information that is as bad as if they'd had a few whiskies or beers.
It's not as much fun as being drunk but it is a struggle to think straight. That's when the amount we have to read and write in the two hours before we go on air has a welcome sobering effect.
When we say those first few words of the programme at 6am, I often think of those whose slumber we are breaking. Why is it so much easier if you set your alarm at 6am than 4am? Why are those extra two hours of night-time sleep so much more valuable than snatched day time hours?
The answer lies in a few thousand cells in a primitive part of the brain - the location of our main body clock or suprachiasmatic nucleus.

It controls everything about when we go to sleep, when we wake up, when our liver produces enzymes to digest food. And it changes our heart rate, increasing it in the morning when we wake up and ensuring it declines in the evening.
Prof Michael Hastings, from Cambridge University, who has spent 20 years working on circadian clocks, says: "All of our organs are running to this pre-programmed genetic pattern to make them do certain things at one time of day and different things at another."
It's a fantastic piece of engineering, the result of evolution, and makes perfect sense for a Neanderthal caveman, but not a 21st Century nightshift worker.
Eat a triple chocolate muffin in the middle of the night, as I have often done, and the sugar and fat hang around in your bloodstream for longer than if you'd eaten it during the day.
High blood sugar levels can lead to type 2 diabetes, the raised fat levels can cause heart disease. That's why nightshift workers are about one-and-a-half times more likely to get heart disease than those who work in the day.
It may also explain the high levels of obesity in those working at night.
There's also a link with cancer. In 2007 the World Health Organisation said night shifts were a probable cause of cancer.
Obesity, diabetes, heart disease, cancer, it is a depressing enough list. But there's another one to add. Recent research showed the brains of workers who'd done 10 years of night shifts had aged by an extra six-and-a-half years. They couldn't remember as much or think so quickly.
A massive study in the US has been following 75,000 female nurses who work shifts over the past 22 years. It has shown that one in ten of those who have worked rotating shifts for six years will die early.
It's not just the harm we're doing to ourselves - in some jobs we put others at risk.
I spoke to someone who spends his nights as a cleaner. Instead of sleeping when he gets home, he says that, after a shower, he goes on to another job driving big trucks around the country. He does that six days a week, on only three hours sleep.
There are rules in place to limit the hours truck drivers can work. What they don't appear to monitor is what a driver is doing in his supposed "rest" time.

The evidence of the price our bodies are paying for that trade-off is piling up, but so too is our understanding of how the body clock works

There are no specific health and safety laws on shift working in the UK but employers do have a duty of care. And some companies and governments are starting to take the issue more seriously - not least because of the threat of legal action. The Danish government has given compensation to women who developed breast cancer after long periods of night shifts. In Korea, electronics workers on long-term night-working who contracted diseases have also received compensation.
There are ways of mitigating some of the damage. A trucking company in America had three fatalities within a few weeks. They changed their shift patterns to stop rotating shifts - that is "flip-flopping" between days and nights - and they ensured drivers had two consecutive days off. Now they have one of the best safety records in the US.
There are huge upsides to working at night. A DJ I spoke to described the joy of watching the dawn and seeing wage slaves scurrying to train stations. For me, it's being able to pick my children up from school.
The evidence of the price our bodies are paying for that trade-off is piling up. But so too is our understanding of how the body clock works. And with that comes the possibility that we can manipulate it - turn the hands forward or back.
The Wellcome Trust has given Prof Russell Foster and his team at Oxford University £3m to investigate a relatively new discovery - something that has been called the sleep "switch".
The VELPO, or ventral lateral pre-optic nuclei, turns on or off the whole neural system that keeps us awake. It raises the possibility of developing a drug to allow our bodies to ignore the light/dark cycle.
Until then our night working puts us out of kilter with our biology.
I've been obsessed by sleep for years. And it has been depressing having it spelt out just what damage I'm doing to my body and brain.
So what do I do about it? Let me sleep on that.

The myth of the eight-hour sleep

We often worry about lying awake in the middle of the night - but it could be good for you. A growing body of evidence from both science and history suggests that the eight-hour sleep may be unnatural.
The myth of the eight hour sleep
Which five things ruin a good night's sleep?
Sarah Montague presents The Night Shift on BBC Radio 4 on Monday 27 July at 20:00 BST. You can catch up via the BBC iPlayer.
Subscribe to the BBC News Magazine's email newsletter to get articles sent to your inbox.