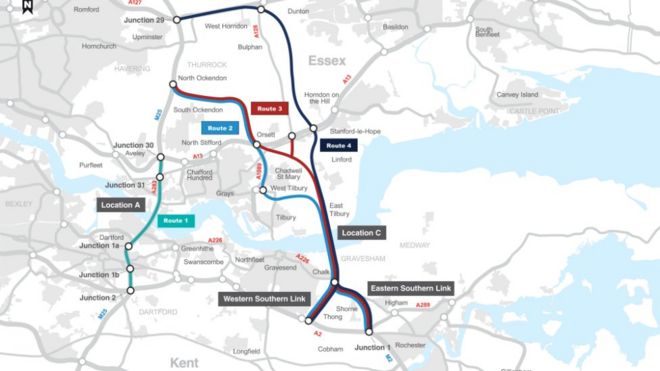 Plans for a multi-billion pound road tunnel under the River Thames between Kent and Essex have been unveiled.
Highways England has announced Option C - connecting Tilbury to Gravesend - as its preferred route for the Lower Thames Crossing.
The planned road would run from the M2 in Kent to the M25 between junctions 29 and 30 in Essex, tunnelling under the Thames east of Gravesend and Tilbury.
A public consultation over the crossing was launched on Tuesday.
Highways England said it was recommending that the new Lower Thames Crossing was built between Gravesend and Tilbury and not Option A, which would see a new bridge alongside the A282 Dartford-Thurrock crossing.

There are three variants to the Option C route north of the Thames and two to the south.
Martin Potts, of Highways England said the route between Gravesend and Tilbury "provides double the economic benefits" of a crossing close to the existing routes between Dartford and Thurrock.
Live: Reaction to crossing plan
He said it would also be a "clear alternative route to the Dartford Crossing, reducing congestion and improving resilience of the road network".
He added: By choosing a tunnel rather than a bridge we can minimise the effects of the new road on the environment.
"There are important choices to be made. As well as inviting comments from the public about our recommendations, we have identified three routes for the new road to the north of the river and two routes south of the river."