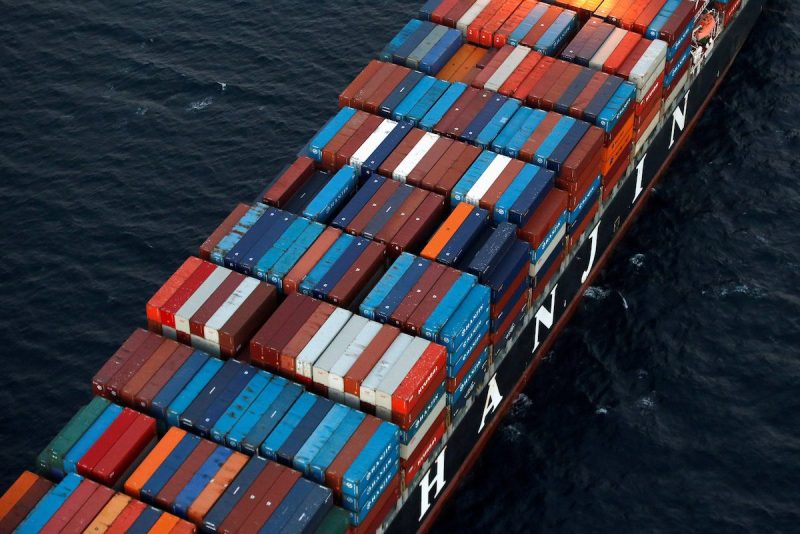 By Kyunghee Park
(Bloomberg) — Hanjin Shipping Co.’s fleet has shrunk to about a tenth of its size after the South Korean container line returned most of its chartered vessels to owners in the weeks following its bankruptcy filing.
All but three of the remaining 14 ships are either stranded or have been seized over unpaid bills. Hanjin once operated 97 box ships, including 61 that were chartered. As overcapacity depressed freight rates and debt piled up at the company, lenders pulled the plug on credit, prompting Hanjin to apply for court receivership on Aug. 31.
The Seoul Central District Court, which is overseeing the receivership, is set to name on Monday the preferred bidder for Hanjin’s Asia-U.S. operations. Hyundai Merchant Marine Co. and Korea Line Corp., a bulk ship operator, have submitted final bids for the fire sale.
The first map shows the current locations of the remaining vessels. Click on it and then move your mouse over the triangles and circles in the popup to view information on specific vessels or ship clusters.
In signs of fading prospects of South Korea’s shipping industry, third-quarter earnings on Monday may show losses at Hanjin and Hyundai Merchant. Daewoo Shipbuilding & Marine Engineering Co. is estimated to report a net income of 20.3 billion won ($17 million) based on the average estimate in a Bloomberg survey of six analysts.
Hanjin was the world’s seventh-biggest container line with a market share of 2.9 percent, making it the only Korean carrier to feature in the global top 10. Now, it’s plummeted to 21st in rankings with about 0.5 percent share, according to Alphaliner, a shipping data provider.
Of the chartered vessels, all except two have been returned to their owners, who have since leased them to others and changed the vessels’ names. Maersk Line, the world’s biggest boxship operator owned by A.P. Moeller-Maersk A/S, has said it’s among companies that have taken on some of the returned Hanjin vessels.
The container line’s bankruptcy filing triggered disruptions in global supply chains ahead of the peak shipping period for the U.S. Thanksgiving and Christmas shopping season. The Seoul-based operator said last month that it was winding down its European business and on Nov. 10 said it would let go of about 700 crew members.
© 2016 Bloomberg L.P