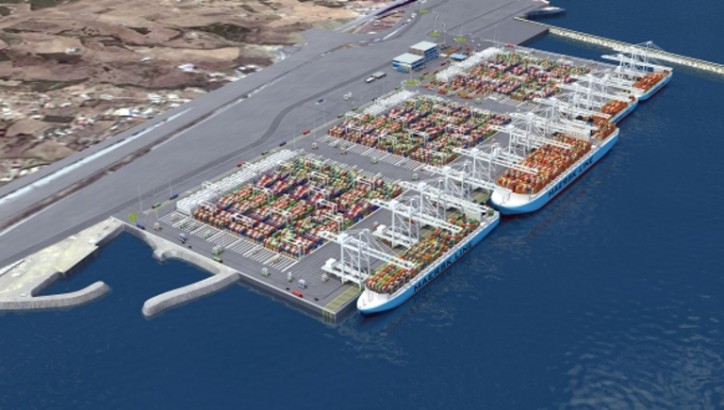 The Dutch company APM Terminals has awarded the construction of a new container terminal for APM Terminals Tangier Med Port to a conglomeration of four companies of the Willemen Groep. The companies being Aswebo, Aannemingen Van Wellen, Franki Construct and Cosimco. The terminal will be built on a site of 53 hectares and will have a quay length of 1.200 meters. It will be the first automated container terminal in Africa.
APM Terminals has been active in the port of Tangier since 2007 and has decided to expand the container terminal to better serve future trade volumes and larger container ships. The facility is strategically located on the Strait of Gibraltar which serves as a shipping hub for many trade lanes.

Experience in port works
The total project consists of 4 lots or 'packages'. All 4 were assigned to the Willemen Groep, which was, among other things, responsible for the development of a container terminal for MPET (MSC PSA European Terminal) in the port of Antwerp.

“To win this enormous project, a team of 35 people, spread across multiple companies within the group worked together on this project for four months. The complementarity of the different companies of the Willemen Groep and the experience we have accumulated in port works, were crucial factors for the Employer APM Terminals to entrust the entire project to our group”, says Johan Willemen, President and driving force for the international expansion of the Willemen Groep.

662 calendar days
The ‘Letter of Acceptance’ was signed on the 7th of November 2016. It states that the work must be executed in a time span of 662 calendar days, with the 8th of November 2016 as 'Commencement Day ' or start date.
The project consists of four ‘packages’. Package A consists of all road and sewerage works, the construction of the pipes for utilities and the pavement and fence works. Also the installation of the ARMG rails is included in the first lot. These are necessary to move the containers automatically to and from the terminal.
Package B includes the construction of the 1.200 meters long crane beam, on which the hoisting cranes will be placed. The crane beam is built on 403 poles with a diameter of 1,35 meters and a length of no less than 24 meters. The poles are drilled in the rock face to a depth of 9 meters. This package also contains all concrete works and formworks.
Package C includes the construction of all utilities for the entire site. The construction of all buildings (Office building and maintenance workshops) of the terminal and the equipment of the gas station and canopies are in package D. All buildings will be delivered completely finished and ready for use.
All works will be carried out in a partnership between Aswebo, Aannemingen Van Wellen, Franki Construct, Cosimco (all part of the Willemen Groep) and some local partners. Mid-February next year the first sod will be cut. On the 1st of September 2018 the works must be finished.
“Largest project in Africa”
The construction of this enormous terminal is not the test piece for the Willemen Groep on the African continent.

Johan Willemen: “Willemen is building a new Belgian Embassy in the Congolese capital Kinshasa since August 2014, the very first passive building in Central Africa. The port of Tangier is as a matter of fact familiar territory for Cosimco, that is active in Morocco since 2014 and has an establishment there. Cosimco has been awarded three projects in Morocco since then, of which two already have been completed. This new container terminal for APM Terminals is not the first project in Africa for our group, but it is by far the largest.”