Drewry: North European ports out of the woods?

New alliances forming in April look set to halt the trend of reduced service frequency at North European ports, according to a new Drewry report.
Analysis contained in Drewry’s Ports & Terminals Insight, a new quarterly report covering the ports and terminals industry, shows that for North European ports the seemingly never ending move towards reduced service frequency may be coming to an end, even with the formation of the bigger alliances.
The establishment of the Ocean and THE alliances in 2017 is likely to only have a limited effect based on the announced schedules. The aggregate number of loops in the Asia–North Europe and North Atlantic trades remains unchanged, and individual ports will see no major change to the number of loops calling. This is in marked contrast to the changes seen during 2016 though. Looking at the East-West services calling at North European ports, the North Atlantic and Asia-North Europe trades are dominated by services operated by the liner alliances. However, we also include the Middle East and South Asia trades, which are covered partly by wayport calls with hub and spoke transhipment using the Asia-North Europe services, and partly by dedicated direct services.
Table 1 shows the changes in the number of loops over the last 12 months, distinguishing between the alliance and non-alliance services. Overall, there has been a 10% drop in the number of east-west loops, with those removed all being operated by the alliances. Two out of nine weekly loops have been removed from the North Atlantic trade (one each by 2M and G6), and three out of 18 loops were removed in the Asia-North Europe trade (one of which was as a direct consequence of Hanjin’s disappearance from the trade). However, average vessel sizes have increased only modestly (4.3%), indicating that the alliances have used the reduction in the number of loops as part of an effort to reduce overall ship capacity, so to match it more closely to demand. This is easier to do with a multi-loop operation than it is for lines outside the alliances.

Source: Drewry Maritime Research
There have been significant changes in the number of loops per week calling at individual ports, particularly in France/Benelux, as shown in Figure 1. Le Havre and Rotterdam lost four and six loops respectively; Zeebrugge lost its only two east-west loops. Bucking this trend, Antwerp achieved a gain of two loops. With the overall reduction in the number of alliance loops (two North Atlantic and three Asia-North Europe), it should be expected that those ports where an alliance has several calls will see a reduction as the alliance will still have calls at that port on other loops. 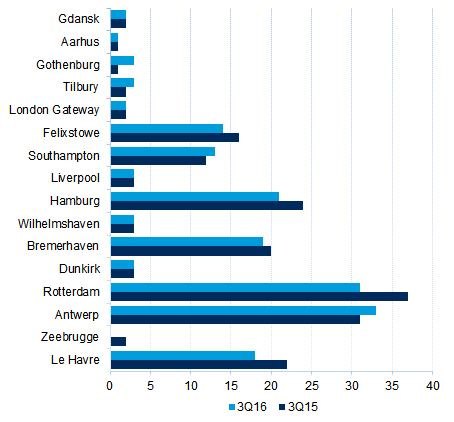 Note: Services which appear under more than one trade heading are only counted once in the totalSource: Drewry Maritime Research
Both Ocean and THE alliances have published details of their intended networks to operate from around April 2017. The number of loop calls per week for North European ports are shown in Table 2, along with a comparison with the present port calls by CKYE/G6/O3. Note though that THE Alliance has not given details of which UK port(s) are included or the Baltic ports of call.
It is significant how little change there is across the alliances (2M is omitted as its services are assumed to be unchanged, unless the possible addition of HMM has any impact). The total number of loops per week remains unchanged at eleven Asia–North Europe loops and seven North Atlantic loops, and a number of ports see no change in their number of weekly calls. Interestingly one call is reintroduced at Zeebrugge, after the earlier cancellation (by O3) of both their calls at the port. On the face of it, this is surprising, and can only reflect that the lines involved have found negative cost and/or competitive consequences of dropping the calls. Omitting Zeebrugge, for example, might have required some lines to absorb some inland transport costs, plus shippers located in or close to Zeebrugge would have been impacted.
When the number of alliances reduces, some rationalisation of port calls might be expected as most lines will have access to an increased number of loops. In fact, this port call rationalisation is not happening with the 71 current loop port calls per week reducing only to 70 per week for the new alliances (across the port range analysed here). Therefore, the ports will not have to cope with fewer port calls and larger box exchanges, but rather, the status quo will prevail.