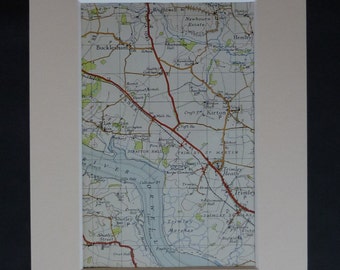 PLANNING APPLICATION - INNOCENCE FARM: DC17/0010/SCO
An outline planning proposal entitled 'Proposed Scoping Opinion for proposed logistics facility' has been submitted by Bidwells on behalf of Trinity College for the development on the Innocence Farm site.  The PC received this on Sat 7th Jan, however were able to draft a response objecting to the proposal which was reviewed at the PC meeting 9th Jan.  The PC response will be loaded on this page once complete. The planning application is viewable on the SCDC planning web site.  Click to view Bidwells' Proposal Document.
The salient points detailed in Proposal document are:
1) Large scale logistics park occupying the entire extent of Innocence Farm, bounded by Kirton Rd, Innocence Lane, Croft Lane & A14.  Bunds are proposed, to reduce the impact on nearby residents.
2) Up to 3,200 HGVs per day - initial access via A14/Croft Lane, with an underpass to be provided for westward traffic at an undisclosed future date
3) Up to 600 cars - access via A14/Kirton Road, via new roundabout before TSM School.
The closing date for comments is 26th Jan.
The PC objection will focus on: Unused existing brown-field sites in the Port area; Unjustified and unrealistic land demand profile; Traffic congestion and associated impact on the village community and associated establishments.
Please share this information with anyone likely to be affected.

https://twitter.com/Kirtonfalkenh…/status/818919681830502401
Has everyone seen this monstrosity of a proposal? Another chunk of our countryside to be destroyed. Comments need to be with SCDC by the 28th!

Land off Kirton Road (behind the buildings) has been earmarked for a 300-acre port business park between Trimley St Martin and Kirton.
Proposals for a massive business park to serve Britain’s top container port – but situated on farmland miles away in the centre of the Felixstowe peninsula – have been submitted to planners.

Port of Felixstowe. PHOTO: Barrie Brooks
Land at Innocence Farm, between the A14 and Innocence Lane, Trimley St Martin, has been earmarked for the 300-acre project, which would be visited by up to 3,200 lorries a day and 600 cars.
It will feature 10 buildings with 10,000 sq m of floorspace, likely to be used as distribution centres for major companies, plus a haulage park and container storage facilities.
A rail head connected to the Ipswich-Felixstowe rail line on the opposite side of the A14 is a part of later phases of the development.
The project has been talked about for some years but has now taken a major step foward with landowners Trinity College, Cambridge, starting the formal process and hoping for an early grant of planning permission from Suffolk Coastal council.
Villagers in Kirton – the closest community – are particularly worried about the plans, which include a roundabout for car traffic just yards from Trimley St Martin Primary School in Kirton Road.
Parish councillors are currently putting together a letter opposing the plans – with the main concerns being unused existing brownfield sites in the port area; “unjustified and unrealistic” land demand; fears over traffic congestion and the impact on the village community and businesses.
Lorries will enter the site from Croft Lane – the Brightwell turning on the A14 – and in the longer term there will be a new junction on the dual carriageway and underpass to connect with the rail head.
Bidwells, agents for Trinity College, said the contact with Suffolk Coastal was part of the pre-application process, and for consideration of the topics of a scoping report for an environmental impact assessment, due to the growing pressure for more logistics capacity that it is anticipated for the Port of Felixstowe.
Almost all land in and around the 700-acre port complex has been exhausted and so the hunt has turned to sites outside the port and inland – the Innocence Farm site being five miles by road from the dock.
Andrew Blackwell, a partner in Bidwells, said: “Before the ideas that inform the sketch layout are further progressed, with commissioned technical studies, Trinity welcome an early meeting with Suffolk Coastal District Council to explore scenarios that range from the 2009 scheme to the most recent.
“Upon mutual agreement on this matter, technical studies can then be advanced and the layout plan progressed in more detail.”
Mr Blackwell said the steady growth in port operations over recent years and the terminal’s need to handle ever larger vessels is placing “intense pressure” on the port owners to source new areas for third-party logistics in and around Felixstowe.
He said: “Fresh areas for this are essential for the continued prosperity of the port, its core activity and the employment that it generates.”


The new business park will be surrounded by a landscaped earth bund up to 10m high and 50m wide.
on January 12, 2017