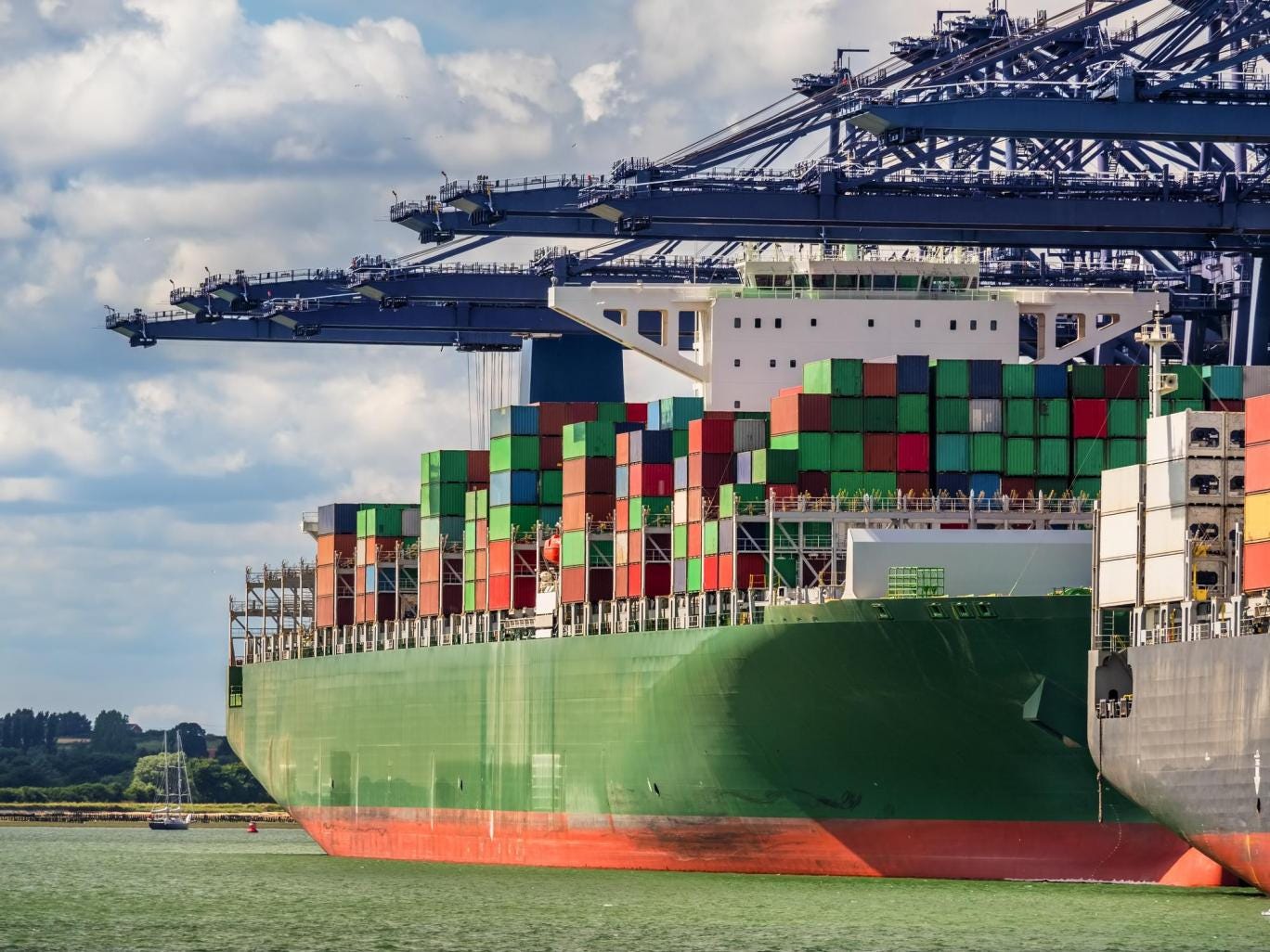 Toxic nitrogen dioxide emissions around major ports and sea routes in the UK are four times higher than previously suggested, according to a report for the Government.
Levels of sulphur dioxide, another harmful pollutant, are three times higher.
Experts say shipping pollutants, which are concentrated around major port cities such as Southampton, Grimsby and Liverpool, are a significant cause of concern for the health of local populations.
Long-term exposure to pollutants like nitrogen and sulphur oxides (NOx and SOx) can contribute to a range of health problems, from asthma to cancer, and has been linked with the deaths of around 40,000 people in the UK annually.
The Government is currently facing heavy scrutiny and potential legal action from the European Union after failing to curb its air pollution levels.
However, the conversation surrounding toxic pollutants has focused largely on road vehicles, and little effort has been made to address the pollution coming from ships that pass through UK waters.
“Cars are not the only sources of emissions in our air. Ships are more fuel efficient than road vehicles, but they use fuels which produce greater levels of emissions than road diesel,” said Dr Matt Loxham, an air pollution toxicologist at the University of Southampton.
“This, in combination with the concentration of vessels in relatively small port areas and shipping lanes, is the reason why there is concern around shipping emissions.”
New analysis presented in a National Atmospheric Emissions Inventory (NAEI) report to the Government concluded shipping is a far greater source of pollution in Britain than estimates made in 2014 suggested, with about 10 per cent of the country’s NOx emissions coming from ships.
The increase in estimated air pollution has arisen from a more thorough analysis that found the amount of fuel being consumed by domestic ships is 2.5 times that of previous figures.
“These latest figures, which show a significant uprating in air pollution from ships, were snuck out ahead of Theresa May’s speech on the environment where she claimed to not be ‘complacent’ on air quality,” said Alan Whitehead, Labour MP for Southampton Test and shadow minister for energy and climate change.
Shipping is a major contributor to both air pollution and greenhouse gas emissions, but one that is often overlooked by policymakers.


Global estimates suggest ships are responsible for 15 per cent of NOx and 8 per cent of sulphur gas worldwide. International shipping also produces around 3 per cent of human greenhouse gas emissions – roughly double that of aviation.
“The reason for this is that ships burn the dirtiest fuel – they essentially run on the lowest grade waste product that you get from a refinery, called heavy fuel oil,” said Dr Tristan Smith, a shipping researcher at University College London who contributed to the report.
Despite this, Dr Smith said regulations on shipping pollution are insufficient, and its greenhouse gas emissions are not even accounted for in the Paris climate agreement.
Not only does ship fuel itself contain high levels of sulphur that is emitted as SOx, ship engines are not controlled to anywhere near the same extent as road vehicles, resulting in high levels of NOx.
“The only good news here is that a lot of these emissions are happening out at sea, meaning less human impact,” said Dr Smith.
“But still, anyone who is living in a port city is getting badly impacted at the moment because there is such light regulation on the exhaust.”
“Air pollution is having a major effect on public health in the UK. Air pollutants damage our health, causing cancer, asthma, stroke and heart disease, among others,” said Laurie Laybourn-Langton, director of the UK Health Alliance on Climate Change.
While it’s difficult to disentangle the contribution that shipping makes to health problems from other sources of air pollution, researchers estimate that up to 30 per cent of the pollution in UK port towns can come from ships.
As nations strive towards ambitious targets to cut air pollution from more well-established sources – by switching to electric cars, for example – shipping looks set to be left behind as a dirty relic of the past.
“It’s much harder to do anything about than cars,” said Dr Loxham.

“Obviously you can reduce the amount of car emissions just by reducing the number of journeys that are made, whereas ships are responsible for the vast majority of the goods trade.”
Around 90 per cent of products we buy will at some point have crossed the sea. Shipping is such a cornerstone of global trade that making significant changes to its infrastructure poses a significant challenge.
Further complications arise because shipping is not primarily regulated by national or EU legislation but by the United Nations’ International Maritime Organisation (IMO), which Dr Smith said “does not have a track record for moving fast on environment regulation”.
However, that does not mean the UK is powerless to stop shipping pollution, and experts say the Government’s attitude to shipping emissions has been far too relaxed.
Professor Mikis Tsimplis, an expert in maritime law at the University of Southampton, said the UK has actively fought for international shipping pollution standards that are the lowest acceptable by all states.
This action “serves only the interests of ship owners,” said Prof Tsimplis.
“There are other aspects of ship pollution that have consequences not only for the human health of the UK population but also the global environment,” he said.
“But they are admittedly secondary when compared with the very serious health issues and the scandalous way UK policy prioritises the interests of a global industry and subsidises it by making the tax payer cover the health cost for it.”
A spokesperson from the Department for Environment, Food and Rural Affairs said: “We have consistently pressed for the most stringent international controls in high risk areas such as the North Sea and English Channel, and have seen shipping emissions fall through regulatory standards.”
“This year we will publish a comprehensive clean air strategy which will set out further steps to tackle air pollution across all sources, including emissions from ships.”
While the NAEI report does predict a slight reduction in NOx emissions in some UK ports – around 20 per cent between 2014 and 2035 – it also exposes the divide between east and west coast UK ports.
The emission control area in the North Sea and English Channel that was introduced in 2015 reduced the sulphur content allowed in shipping fuels throughout the region, however, it provides no coverage for cities in the west of the country.
That means western ports have received no extra protection from high polluting ships, as evidenced by the report’s prediction that NOx levels in Liverpool will not change at all.
In April the IMO will meet to discuss a climate deal that also has the potential to alleviate air pollution.
It is possible to make shipping greener and safer, say experts, but there is a need for national as well as international action.
Prof Tsimplis said the Government is fully capable of implementing pollution limits for ships visiting UK ports.
“Even if they want to stand by the argument that they wish to facilitate international shipping and make the UK ports attractive to them, there is no excuse for why they did not implement much lower limits for ships which either only trade within the UK or are providing assistance in ports,” he said.
Dr Smith said there is a need to quickly move beyond fossil fuels in shipping.
“The UK Government has chosen to place the regulation of our coastal shipping pollution, and health of coastal communities, in the hands of the IMO,” he said.
“As this report shows this leaves several key pollutants from ships uncontrolled and with little prospect of change.”
“But this is a sector with huge potential and growing commercial appetite to move to become zero-emitting both of pollutants and greenhouse gases.”
He noted that other nations are both pursuing a transition away from fossil fuels in shipping, and setting aggressive targets that go beyond IMO regulation.
“It is therefore really important that we do the same or we will be increasingly left behind,” he said.
“Pollution from shipping receives significantly less attention than it deserves,” said Dr Whitehead.
“As we grapple with building a low carbon economy which averts climate change it is an issue that we will need to look at long and hard.”
http://www.independent.co.uk/environment/air-pollution-uk-shipping-levels-record-environment-fumes-damage-nitrogen-dioxide-sulphur-a8189691.html