David Attenborough on the scourge of the oceans: 'I remember being told plastic doesn't decay, it's wonderful' 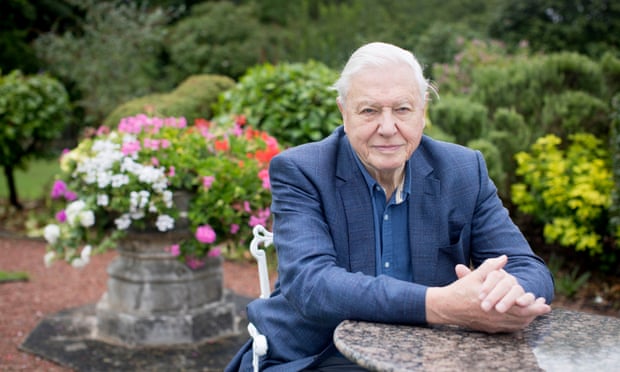 His sequel to The Blue Planet will focus not only on the marvels of sea life but also the threats to it. The naturalist explains why plastic pollution, climate change and overpopulation are problems too urgent to be left to ecologist

David Attenborough vividly remembers, nearly 80 years on, his first encounter with one of the worst scourges of the planet. He was a schoolboy. “I remember my headmaster, who was also my science master, saying: ‘Boys, we’ve entered a new era! We’ve entered, we’ll be proud to say, the plastic era. And what is so wonderful about this is we’ve used all our scientific ingenuity to make sure that it’s virtually indestructible. It doesn’t decay, you know, it’s wonderful.’”
Attenborough lets the last word hang in the air, eyebrows and hands raised. Then the hands fall. “Now we dump thousands of tonnes of it, every year, into the sea, and it has catastrophic effects.”
Pieces of plastic in the ocean will soon outnumber fish. They have, in the past few years, been recognised as one of the most pressing problems we face. Fish eat the plastic debris, mistaking it for food, and can choke or starve to death. The long-term effects are not yet understood, but we do know that plastic microparticles are now found in drinking water across the world, as well as throughout our oceans.
Plastics are the latest in a long line of concerns for the 91-year-old naturalist. They are a key theme of his latest work for television, the new series of The Blue Planet, which he will return to writing after our interview. Premiering at the BFI Imax in London this Wednesday – with Prince William as a special guest – the series will focus not only on the marvels of ocean life, but the threats to it, of which plastic is one of the worst. It will also deal with what people can do to help.
The arc by which plastics started off as a wonder of technology and ended up as a calamity is familiar to the veteran conservationist. It seems to be repeated endlessly: CFC aerosols and refrigerants destroying the ozone layer; pesticides killing wildlife; the fossil energies that fuelled a career based around television and exotic international travel resulting in climate change; the advances in medicine prolonging life and bringing good health, but giving us a population explosion that Attenborough fears will endanger further species, including our own.
For Attenborough, however, there must always be a message of optimism running above and beyond any warnings of doom. While he admits to sadness at the disappearances he has witnessed – “Overall, without any question, the world is not going to be as varied and as rich as it was a hundred years ago” – he insists on practical solutions. “It’s within our power, because most of the problems are created by us, and we can solve them or should be able to solve them,” he says, slapping his knee emphatically. “There are solutions, and there is cause for hope, and there’s cause for encouragement, and it isn’t all disasters.”
Take plastics. That problem could be solved “if we got together, within a decade, if not less”. It could be dealt with technically, through potential breakthroughs such as degradable plastic. “And disposing of it could be dealt with technically,” he adds. This could involve ways to collect and filter plastics from the sea, and to absorb or break down the plastics that are already there. And “stop putting plastic in the sea”.


A career spanning seven decades has earned him a loyal following of tens if not hundreds of millions of viewers, who are entranced by his delight in the beauties and savageries he witnesses. It has also given him a unique authority. When Attenborough speaks, viewers tend to trust him.
For years, he kept this trust to himself. He was associated with several conservation groups, from Flora and Fauna International to the Dragonfly Society, but did not use his public platform to make prescriptions for the planet’s future. For this, he was sometimes criticised by green activists, who wanted him to take a public lead on issues such as climate change.
It is evidently a criticism he feels a need to address, and, without prompting, he offers that in his earlier career he felt inhibited by his association with the BBC, where he was a channel controller as well as presenter, and the need to be strictly impartial. “I joined the BBC after [national service in] the navy, and there was a monopoly and it was like a civil service. So you had to be guarding against propaganda or guarding against grinding axes. And so the moment had to be judged as to when it was you suddenly started talking about conservation and when it was that you were behind the Greenpeaces of this world. They were the cutting edge and you, as a broadcaster, had to make sure that both sides of the argument were ventilated until such time as you, in your professional capacity, thought it was absolutely justified to say: ‘This is incontrovertible, this is what we’re doing to the natural world.’”
As he has felt more free to speak out, one of the more controversial areas Attenborough has addressed is population growth. Of all the world’s problems, this is the one he sees as central and most difficult to solve, although it is a tricky and unpopular cause to take up. Many high-profile environmentalists will privately agree that the rapid growth in the world’s population – now at more than 7 billion, a tripling since Attenborough was born – creates further problems, because feeding 9 billion by 2050 will be hard, and raising people out of poverty even harder, and it makes a real conundrum of giving people decent lives, opportunities and governance, while protecting dwindling natural resources and halting climate change. For a start, it sounds offensive, even patronising – particularly coming from anyone who lives a relatively privileged life in a developed country. For another, it crosses religious and other taboos. And – for many the clincher – it can look like blaming the more numerous poor of the developing world for problems emphatically not of their making.
Attenborough chooses his words slowly. “I sometimes question whether I should be more positive or more outgoing on the question. The trouble is that we don’t know the answer. What we all say is that if women are given political freedom and education and medical facilities and all the rest of it, the birth rate falls. That’s actually not the whole question. It’s more complicated than that. But it’s all I can say in response. One should be very cautious about imposing, from where I sit, regulations where other people have got the problems.”
But he will draw the links between population growth and ecological destruction. “The whole question of migration out of Africa across the Mediterranean has multiple causes and part of it is the political systems, but part of it is undoubtedly ecological systems and sociological problems. I mean the changing of the climate in Africa, the spread of the desert in Africa, the rise of political systems which oppress – all those things mount up. That’s why conservation is not any more just the affair of ecologists.”


Viewing conservation as part of the whole future of humanity, rather than a thing apart, is one of Attenborough’s great legacies. He is spearheading an effort at Cambridge University to bring all academic disciplines – “not just other botanists, not just ecologists, but law, international lawyers, psychologists, geographers, political scientists and so on” – to bear on the pressing problems of the planet. “Break down those walls and get people talking about it who wouldn’t otherwise meet,” he says.
The Cambridge Conservation Initiative is a collaboration among 10 institutions, housed in the new Sir David Attenborough building in Cambridge. Its future has just been assured by a $10m (£7.4m) endowment from Arcadia, the charitable fund of Lisbet Rausing, one of the heirs to the Tetra Pak fortune, and her husband, Peter Baldwin. It will work across all conservation and environmental issues, and its ethos mirrors Attenborough’s own polymathic approach: the idea is that people will congregate in the building, from all over the world as well as across disciplines, for the cross-fertilisation of knowledge.
Attenborough spent two years at Clare College, Cambridge, from 1945, taking a degree truncated by the war. “It was two years of unalloyed bliss,” he says. “It’s a sudden great opening of windows, if you’re a provincial grammar school boy like me. And you were with these people who had been fighter pilots and so on and you realised that the sun had come out over Europe and over you. You were just looking through intellectual windows and singing, yes, madrigals – never heard of madrigals before. Gosh, how marvellous.”
It was here, while ostensibly studying X-ray crystallography (“it was ghastly – I couldn’t understand a bar of it”) that he embarked on turning his interest in nature into the beginnings of a career. “A guest lecturer came in and talked for an hour about frogs. And all the extraordinary varieties, the beauties of frogs, how the frog’s life was dominated by how on earth they were going to rear their young, who needed water. Some did it by spinning foam and hanging it above a pond. Some by taking their eggs into their mouths. Some even did it by putting eggs in their stomachs – extraordinary. And so you sat there with your jaw slacking, just the amazement and splendours and wonders of the world.”
Keeping that sense of wonder will be what keeps us alive, he believes, if we do choose to save the planet. “If you want a comfortable life, what you do is you turn your mind, your face away from problems, of course.” He sees his responsibility as reminding people that they can and must turn towards the problems, and find solutions – in day-to-day life and in collective efforts. To do that, he believes, the most important thing is to remind people of what they have forgotten, and what is sometimes hard to remember – why we are in love with the world we live in.
“People say to me, ‘How did you first become interested in animals?’, and I look at them and I say: ‘Was there a time when you were not interested in animals?’ It’s the first sort of pleasure, delight and joy you get as a child. As a child grows, he becomes aware of all sorts of things, sex or computers and the internet and so on. But if he loses the first treasure, he’s lost something that will give him joy and delight for the rest of his life.”
https://www.theguardian.com/tv-and-radio/2017/sep/25/david-attenborough-on-the-scourge-of-the-oceans-i-remember-being-told-plastic-doesnt-decay-its-wonderful?CMP=fb_gu