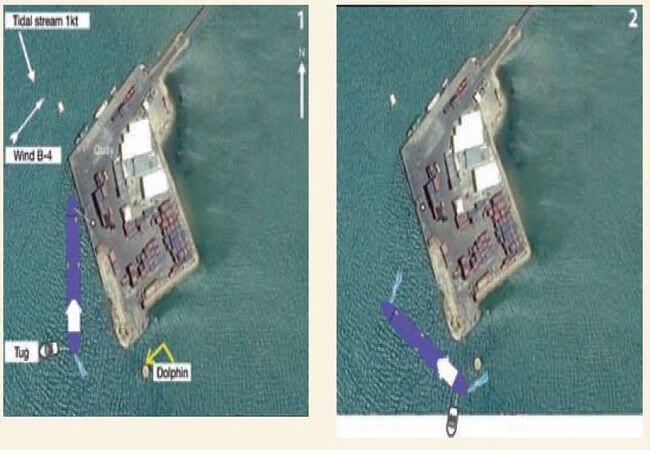 A 1,100 TEU container ship was leaving berth assisted by a small port tug. The tug, with a 320hp engine and a single fixed-pitch propeller in a nozzle, was normally used to move barges rather than large ships. It was serving as a temporary replacement for the port’s usual ship-assisting 1,200hp Voith configured tug, which was undergoing maintenance.

On the bridge for the departure were the Master and pilot, the chief officer and a helmsman. All communication between the pilot and the tug was conducted in the local dialect, which the crew was not able to understand.

According to the agreed plan, the tug had been secured on the container vessel’s port quarter with two of the ship’s mooring lines payed out about 40 metres. The lines were placed over the tug’s single towing hook.
The Master was initially concerned about the tug’s ability to assist the ship effectively in the planned maneuver, and requested the pilot to direct the tug to pull on the port beam with full power. The tug’s performance satisfied the Master, so the stern mooring lines were let go. With the stern lines away and the tug continuing to pull at full power, ahead propulsion was ordered and starboard helm applied on the container ship. The resulting actions caused the vessel to pivot on the remaining forward back springs, thereby enhancing the stern’s movement away from the quay (diagram 1).
Within a few minutes, the container vessel’s stern was about 25 meters from the quay; the forward backsprings were then let go. The engine was then initially put dead slow astern with the bow thruster full to port, and then hard to starboard helm and dead slow ahead, with the bow thruster remaining full to port. Shortly afterwards the helm was ordered amidships and then hard to port, but the vessel was by now moving astern with its stern coming dangerously close to the mooring dolphin (diagram 2). Half ahead was ordered and the bow thruster half to port, and then full ahead, hard to starboard helm and bow thruster full to port in order to avoid hitting the dolphin. Soon, the ship was moving ahead at more than 5 knots. The tug, which was now astern of the vessel, was unable to gain a safe position because of the unexpected (to the tug crew) and rapid forward motion of the container ship. It quickly girded and capsized.
The Master immediately ordered stop engines and the local pilot boat proceeded to assist the tug crew in the water. After rescue operations, two of the tug’s crew were pronounced dead.
Although the rapid forward movement of the container vessel that had led to the tug’s girding was ultimately the primary unsafe event, several aggravating factors on the tug also contributed to the negative outcome:
– The towing hook was not fitted with an emergency release mechanism
– A gog rope was not rigged
– Doors and hatches were left open during the towing operation
– None of the tug’s five crew was wearing a lifejacket or other buoyancy aid.
The official investigation found, among other things, that:
– The container ship’s ahead movement was not communicated to the tug crew, so the tug was caught in an unsafe position and was subjected to girding.
– The pilot and Master concentrated solely on trying to prevent the ship’s stern from making contact with the mooring dolphin, so communication with the tug was less than optimal.
Lessons learned
– When in doubt, reconsider your plan. In this case, the tug in service was approximately one-quarter as powerful as the tug normally used and the Master had some doubts about its efficacy before undertaking the manoeuvre.
– Always keep assisting tugs appraised of your vessel’s movements, preferably before the movement begins.
– For tug crews, ensure your vessel is seaworthy and the crew properly trained and equipped.
Press Release: nautinst.org