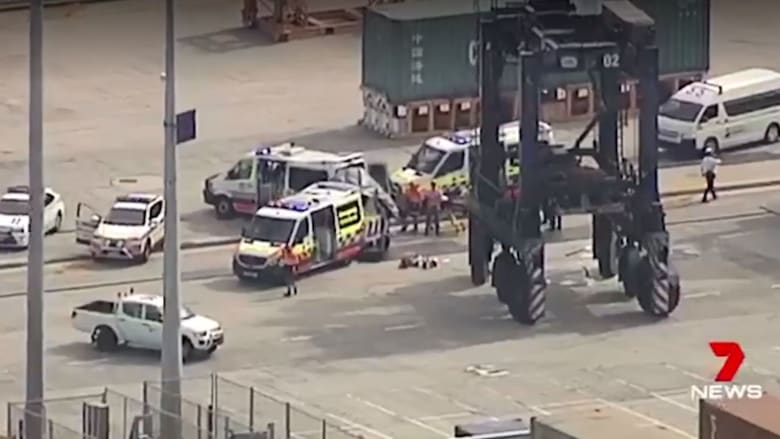 The patient was placed into an induced coma after the fall and transported to hospital.
Photo: Seven News

"As a result of that fall, she sustained head injuries, multiple limb fractures," Acting Superintendent Steven Vaughan of NSW Ambulance said.
"The crews worked with the medical team to stabilise her on scene. The patient was placed into an induced coma."

Video from the site, aired by the Seven Network, shows ambulances parked around a large straddle carrier - used to move containers - with paramedics working on the woman.
The machine's cabin appears smashed while shattered glass and debris are scattered on the concrete below alongside a pool of blood. 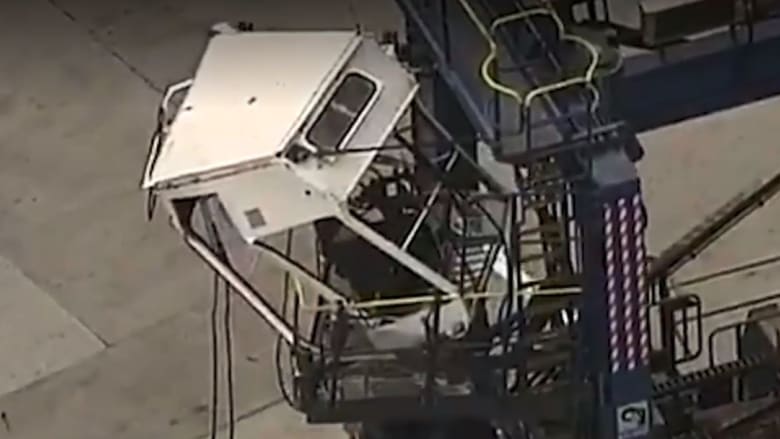 Another straddle carrier is parked within metres of the vehicle from which the woman fell.
She was transferred to St George Hospital and then rushed into emergency surgery.
SafeWork NSW has begun investigating the incident.
AAP

https://www.smh.com.au/national/nsw/woman-critical-after-10-metre-fall-in-sydney-20180419-p4zakp.html
Police and workplace safety investigators are looking into an incident at Port Botany where a worker fell from a container lifting machine after it collided with another machine. Vision courtesy: Seven News.

0:00
/
0:22
Woman in hospital after falling 10 metres at Botany industrial site
FShareTTweetBMail
A woman is in an induced coma after falling about 10 metres off an industrial vehicle in Port Botany.
The woman, 54, was at an industrial worksite at Hutchinson Ports when the accident occurred just after midday.
NSW Ambulance Acting Superintendent Steven Vaughan told 9NEWS the woman was working at the site when she had a "significant fall".


The incident occurred at Hutchinson Ports this afternoon. (9NEWS)
The woman fell from an industrial vehicle. (9NEWS)
Paramedics worked to stabilise the woman before taking her to St George Hospital. (9NEWS)
A specialist medical trauma unit, including a doctor and a critical care paramedic, and two paramedic crews were deployed to treat the woman.
"On their arrival, (paramedics) found a female, approximately 50 years of age, who had fallen eight to 10 metres from some machinery at Port Botany," Acting Superintendent Vaughan said.


The woman has a serious head injury, as well as a broken arm and a broken leg. (9NEWS)
Two ambulance crews and a specialist medical trauma unit rushed to her aid. (9NEWS)
"The crews arrived, assessed and treated her, stabilised her and she was transported to St George Hospital in a critical condition."
She has sustained multiple serious injuries, including a closed head injury, a broken leg and a broken arm.