A Disaster at Sea, Animated by 26 Hours of Black-Box Recordings 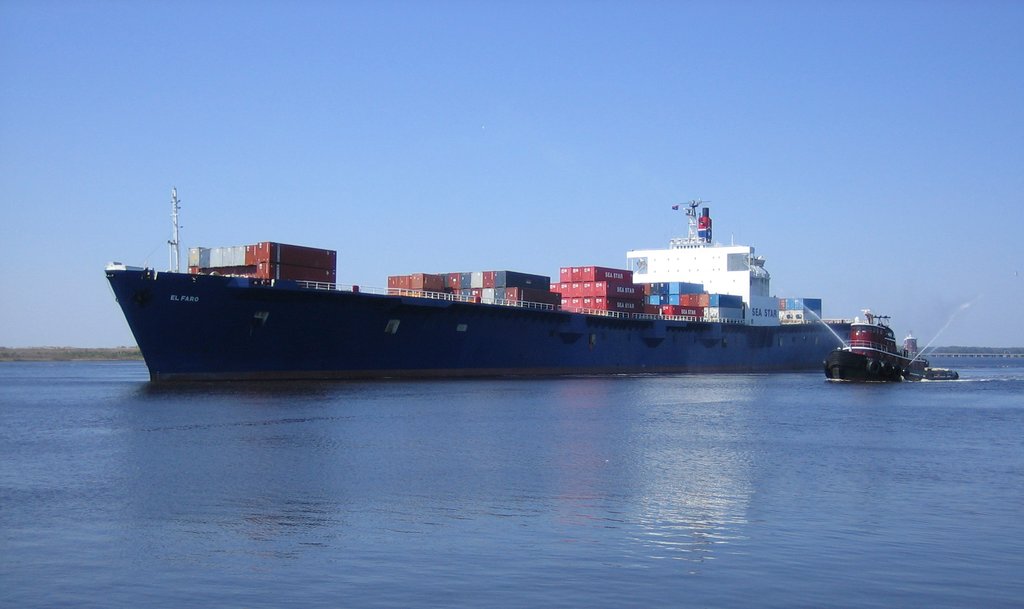 INTO THE RAGING SEA
Thirty-Three Mariners, One Megastorm, and the Sinking of the El Faro
By Rachel Slade
416 pp. Ecco/HarperCollins Publishers. $27.99.
On an island along the Maine seacoast, near where I grew up, lies an abandoned cemetery. Some of the headstones have birth dates but no death dates and read “Lost at Sea.” This is how it once was: A mariner would say goodbye to his family, set to sea and vanish off the face of the earth. No one knew what happened when a ship sank on the vast and lonely deep, its last moments forever a mystery. After years of waiting, the families would finally accept the inevitable and put up a tombstone.
How different is the story of the last moments of El Faro. In 2015, this 790-foot container ship sank off the coast of the Bahamas in Hurricane Joaquin, with 33 hands lost — the greatest American maritime disaster in 40 years. What makes this story unique in the annals of tragedies at sea is that the ship’s final hours were captured in remarkable detail. Six microphones on the bridge preserved the last 26 hours of conversation on El Faro’s voyage data recorder, a nautical black box. An intense search recovered the recorder three miles down, at a cost of $3 million. The transcript of these conversations, as well as (one-sided) electronic communications among the captain, mates, engineers, able seamen and people ashore, runs to 500 pages. It is the most detailed live record of a maritime disaster ever created — and what a story it tells.
The transcript is also a nonfiction writer’s dream, and Rachel Slade, the author of “Into the Raging Sea,” has made good use of it. All the dialogue in the book that takes place aboard ship is taken from this transcript. Unlike the authors of “The Perfect Storm” and other books about marine catastrophes, Slade did not have to resort to reasonable inference and guesswork about the vessel’s final moments. She was able to quote the actual words spoken on the bridge. The mundane remarks about the fetching of coffee, the complaints about the company, the jokes, the giving and taking of routine orders and the wistful asides about home, children and spouses left behind — these details paint a poignant and tragic picture of ordinary people heading to their deaths.
The recorders also captured the crew’s growing concerns over Capt. Michael Davidson’s stubborn refusal to divert from the storm, as well as the unheeded advice they gave him and their anxious remarks, nervous laughter and cursing when he was not on the bridge. But perhaps most astonishing is the captain’s calm and supremely self-assured persona as he leads El Faro to its doom. On the ship’s last night, after the captain retired to his cabin for an inconceivably imprudent eight hours, the second mate who was on watch, Danielle Randolph, made a plot of their course in relation to the storm and showed it to her helmsman, Jackie Jones. 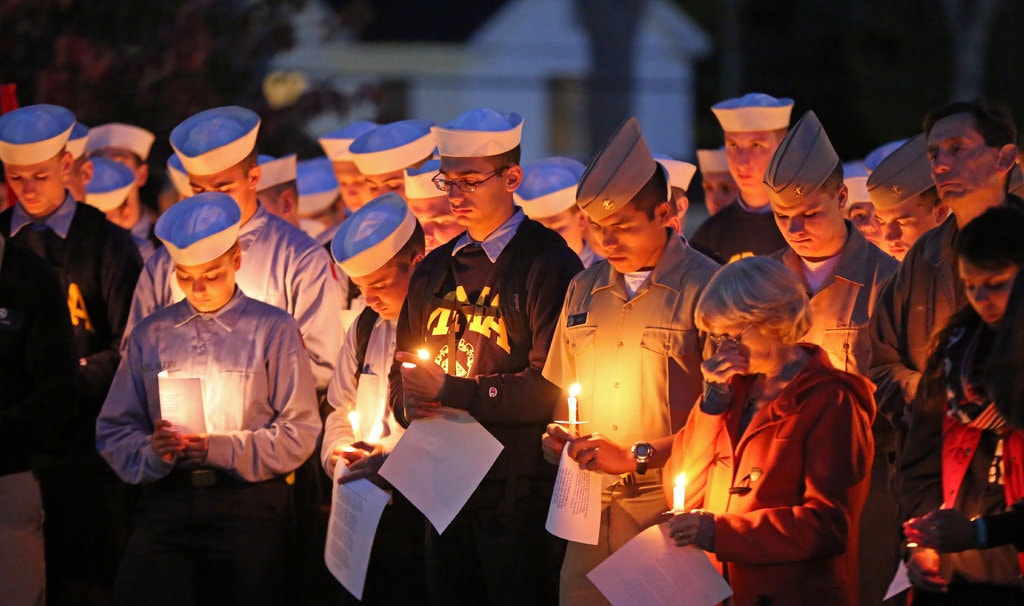 Maine Maritime Academy students hold a vigil for missing El Faro crew members.
“‘That’s where we should be and that’s where the hurricane’s gonna be,’ Danielle said, laughing, always laughing, at the absurdity of their predicament.
“‘Gotta be a better way to go,’ Jackie said.
“‘Max winds 85, gusts to 105 knots,’ she read out loud.
“‘We’re gonna get our ass ripped.’”
The facts are not greatly in dispute. The fault was largely that of Captain Davidson for steaming El Faro into the eyewall of Hurricane Joaquin, despite the warnings of his crew. A captain has always been the absolute commander of the ship, not to be questioned. It had to be that way, because in past centuries ships were utterly cut off from the world. Today, a captain has access to many resources on shore, but the role remains the same: He or she is god of the ship. But the god of El Faro never quite grasped the gravity of the situation. Even as the ship was engulfed in the storm, in the grip of 130-mile-an-hour winds, battered and listing, loose cars and trailers crashing about in the hold, Davidson appeared strangely disconnected.
“‘Stand up straight and relax,’ Davidson told the panicked helmsman, Frank Hamm.
“‘I am relaxed, Captain,’ Frank replied.
‘Relax. Steer the direction we’re going.’”
Davidson’s knowledge of seamanship was surprisingly inadequate. He relied on weather information from a commercial service, unaware that the reports were at least nine hours old. He didn’t know what a “downflooding angle” was (how far a given ship can list before water pours in through unsecured openings), let alone have at hand that critical angle for his own ship — one of the main reasons El Faro sank.
Other factors also came into play. The hurricane wandered about, confounding the forecasters. Built in 1974, the vessel was an outdated rust-bucket with many shortcomings that were grandfathered in by the Coast Guard: open lifeboats instead of enclosed ones; a lack of basic electronics and chartplotters that you would find on even the meanest pleasure boat; ventilator openings in the upper hull and other design flaws that would never be allowed by modern marine regulations. El Faro didn’t even have a working anemometer, a wind-speed gauge. As hurricane winds were heeling the vessel past its downflooding angle so that the sea poured in through those same rotting ventilators, the captain had no way to determine wind velocity.

On top of all that, the company that owned the ship, Tote, was shockingly dysfunctional. According to Slade, it had no port captain supervising the ship while at sea and no rational system for evaluating and promoting (or firing) mates and captains. The company missed the captain’s first emergency phone call ashore because the man responsible for receiving it was out of reach and hadn’t designated a stand-in. No one at the company was tracking any of their vessels at sea — or the course of the storm.
All this makes for a powerful and affecting story, beautifully handled by Slade, a journalist who clearly knows ships and the sea. The book tells of the heroic search-and-rescue operations, the hunt for the black box, the investigations and hearings and the nature of hurricanes. It chronicles the despicable reactions of Tote and its upper management to the tragedy. The pusillanimous, corporate-speak testimony of several corporate executives is quoted at length — perhaps at too great a length. But one can’t help reading it, page after page, in disbelief and disgust.
Several days after the sinking, a courageous rescue-swimmer was lowered from a helicopter and came across a single body floating in a red survival suit, its head three times the size of a normal human’s. A GPS locator was dropped, but it malfunctioned and the body was never seen again. This may have been the captain’s remains, as the rest of the crew was mustering below at the time of sinking and the bridge was probably the last part of the ship to slip beneath the waves. In the end, no bodies were recovered.
The transcript ends with a heart-rending exchange, shouted over the roaring storm between the captain and his helmsman, who was trapped as the boat rolled on its side.
“The helmsman cried out, ‘You’re gonna leave me.’
“‘I’m not leaving you. Let’s go.’
“‘I need someone to help me.’
“‘I’m the only one here.’
“‘I can’t. I can’t. I’m a goner.’
“‘No, you’re not.’
“‘Just help me.’
“‘Frank, let’s go,’ Captain Davidson said. ‘It’s time to come this way.’”
What was said next, if anything, was cut off by the immense reverberation as 790 feet of steel sank beneath the raging sea. Minutes later, Slade writes, “the American government’s network of hydrophones in the Atlantic Ocean picked up an enormous thud just beyond Crooked Island in the Bahamas.” It was the sound of El Faro slamming into the ocean floor, 15,000 feet down.


The Search for El Faro: What We Know