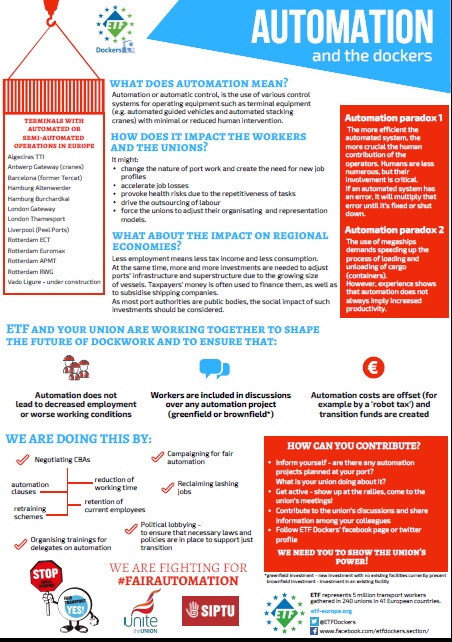 ✔How does it impact regional economies?

✔Which are the automated ports in Europe?

✔How about automation paradoxes?

✔What are ETF and its unions doing about port automation? And how?

✔How can you engage and contribute?

Here is our brand new automation poster in English. More language versions will be published soon.

Want some printed copies? Just email us at dockers@etf-europe.org or message us on FB!

Automated & Semi-Automated marine terminals have, of late (and in the past), been topics that require(d) the careful consideration and attention of both labor and management interests. The infrastructure required to effectively deploy the requisite systems is extremely expensive and (as with all emerging technologies) not fully matured. Consequently, financial resources dedicated now, could very likely require even more resources being spent later as better "mouse traps" are developed and offered by manufacturers who are poised to make a killing if they can successfully market their products.
Moreover, there are human and moral considerations that also require careful and compassionate attention. After all, the marine cargo handling industry has evolved and prospered as a result of the long term successful collaboration between labor and management. The participants on either side of the table are, more often than not, individuals who are third, fourth and fifth generation representatives whose father's, grandfathers, etc., worked closely with one another in a give and take fashion, in order to ensure the viability of their collective enterprise. Unilaterally deleting, in a substantial way, one side of that long-term relationship does, on its face, appear to be more than a reasonable conscience could bear.
As technology progresses, however; no matter how beneficially controlled or restricted that progress is deployed within the marine cargo handling industry, the occupational safety of all those management and labor interests still standing will need to be considered. And there's perhaps more to that than meets the eye.
Reminders of that fact are set out within the scholarly law article below.

prev
next
USA May 11 2018
Seyfarth Synopsis: Due to the increased use of robotics and computer automation for many job functions that have historically been performed by employees raises, besides the traditional personnel and employment issues, a host of workplace safety issues.
The U.S. Occupational Safety and Health Administration’s (OSHA) has been working to address potential safety hazards posed by robotics in the workplace for many years. As early as 1987, in OSHA’s Guidelines for Robotics Safety, Directive No. STD 01-12-002, OSHA noted that “industrial robots can be used to perform hazardous tasks but in doing so they can create new hazards. With the burgeoning use of robots in industry, it is feared that without adequate guarding and personnel training, injury rates for employees working with robots may increase.”
Workplace Robotics Safety
Employers traditionally have called upon robots to perform unsafe, hazardous, highly repetitive, and “unpleasant” tasks, reducing potential hazards associated with those specific functions. Early robots, which mainly conducted a pre-programmed task and did not have any “intelligence” as many robots do now, created potential hazards not only under normal operating conditions, but also during “programming, adjustment, testing, cleaning, inspection, and repair periods.”
During workplace robot functions, the operator, programmer, or maintenance worker may temporarily walk within the robot’s “work envelope” (the area around the robot where performs its task) while power is available to moveable elements of the robot. This created potential machine guarding, lockout/tagout, and electrical safety hazards, among others. In addition, as industrial robots have advanced over the years, they have performed increasingly complex tasks with multiple tools and variable programmed motions, potentially exposing more employees to different hazards.
OSHA’s lockout/tagout regulations require employers to protect employees from unexpected energization of machinery by, among other things, dissipating all sources of energy when the machines are not in use and installing a lock. With robots, the primary source of protection from unexpected movement is a “programmable logic controller” or “PLC.” PLCs limit robots from moving when not performing their pre-programmed tasks and functions or if a certain condition is met – i.e. an interlocked door is open. While these PLC devices typically “fail to safe,” OSHA has been reluctant to accept them as equally effective means of employee protection along the lines of machine guarding or lockout/tagout.
Now, some thirty years after their widespread appearance in the workplace, robotics and computer automation have permeated nearly every industry, including manufacturing, warehousing, and even retail, potentially exposing additional workers to hazards. In Japan, some coffee shops now serve coffee utilizing robotic “baristas.”
OSHA’s Online Technical Manual Regarding Workplace Robotics
While OSHA has not promulgated regulations specifically covering use of robots in the workplace, OSHA has created an online technical manual to inform employers about the hazards associated with robotics and automated machinery, such as those which may result from malfunctions or errors in the programming or interfacing with peripheral equipment. Operational changes with the process being performed or the breakdown of other machinery or electronic sensors could also cause the robotics to react in an unwanted and hazardous manner. In its tool, OSHA identifies the following as important considerations for any employer intending to use robots in the workplace:
While, again, OSHA does not have regulations specific to robots in the workplace, employers would be wise to conduct job hazard analyses and evaluate any existing or potential robotic equipment installation, to abate any hazards posed by these machines.
Safety Regulation of Autonomous (Robotic) Vehicles
The ongoing robot revolution has ventured into the future of passenger and commercial vehicles. Some employers have embraced the possibilities of a potential transition to autonomous (technically, “robotic”) vehicles as an opportunity to limit driving-related hazards to their employees .
In a recent study, the U.S. Department of Commerce found that 15 million US workers (about one in every nine workers) drove vehicles as part of their jobs. These jobs are concentrated in the transportation and warehousing industries. The study highlighted that the fatality rate (per 100,000 full-time equivalent workers) for motor vehicle operators from on-the-job roadway incidents involving motor vehicles is ten times the rate for all workers, and the numbers of roadway motor vehicle occupational injuries resulting in lost work time (per 100,000 full-time equivalent workers) is 8.7 times as large as that of all workers.
It should be noted that automated vehicles present their own hazards. OSHA has not yet weighed in on how employers should address hazards posed by autonomous cars and trucks at their facilities.
With regard to driving on public roads, the U.S. Department of Transportation and the National Highway Traffic Safety Administration (NHTSA) recently released new federal guidance for Automated Driving Systems (ADS), which should provide preliminary guidance with regard to some of the safety issues posed by autonomous vehicles. Employers should watch these developments closely, as new technologies change the marketplace and potentially affect employee safety.