Ever Golden departs the Port of Felixstowe after her maiden call. 3 Svitzer tug assist 21st May 2018 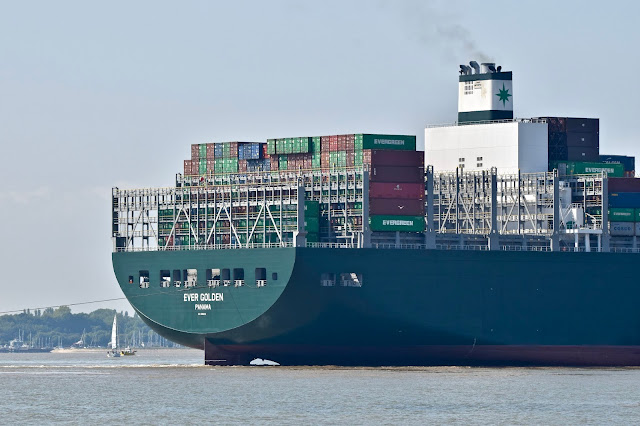 New build Ever Golden, alongside Felixstowe Berth 8, was scheduled to depart at 16:00 but fell slightly behind on cargo operations. Subsequently her departure time was put back to 17:00 which was confirmed about 2 hours to her departure. A Harwich Haven Pilot goes across from Harwich on a pilot launh to the tug pontoon. Once over Felixstowe he makes his way to the gangway of the Ever Golden then heads to the bridge. The last crane booms up as the pilot comes on the radio to say there was about 10-15 minutes of lashing to complete and then they would be ready for departure with a maximum draught of 12.8 metres and the three tugs that were ordered. Svitzer Deben and Svitzer Sky leave the tug pontoon shortly followed by the Svitzer Kent. The pilot radio the tug to say how he would like to use them. The Deben makes centre lead aft, Sky makes fast on the starboard quarter and the Kent makes fast centre lead forward. As there was an Easterly breeze the Sky was required to push up just forward of the funnel while the mooring gang singled up.


As pure usual the unpredictable British weather we have, it started to rain. Neather the less a few splashes of rain wasn't going to stop her departing. Just down to springs fore and aft, the Sky increases power as one spring was giving the mooring gang a bit of trouble. All lines released, Sky backs off into a pull position while the centre lead tugs slowly build up power to ease her off the berth before increasing again. Sky begins to increase their power to help get the stern into the Ebbing tide. After a little while the pilot gets the Sky to stop and close up ready to let go. Once let go they head around the stern to the port quarter as the Ever Golden goes ahead toward the 90° Beach End turn out of the harbour. As the pilot comes ahead on the main engine he gets the Kent to go right ahead and then slacken up to let go. Once released they peel off on to the Felixstowe side back to the tug pontoon. Deben drops in astern ready to assist with a powered indirect. The Fort Buoy approaching, Deben is asked to go out on the starboard quarter at full line load. Sky pushes up at a 45° angle on the port quarter. Both tugs give the Ever Golden a 9° rate of turn out of the harbour. Deben out on the starboard side has an impressive angle as she winds up the power. The pilot finished with the Sky he gets them to break away from the ships side and they are dismissed. Deben eases and closes up to let go from aft. Once released they stay outide the harbour for the inbound OOCL Indonesia.