Evergreen's largest and newest vessel, Ever Golden arrives to Felixstowe on her maiden voyage 200518 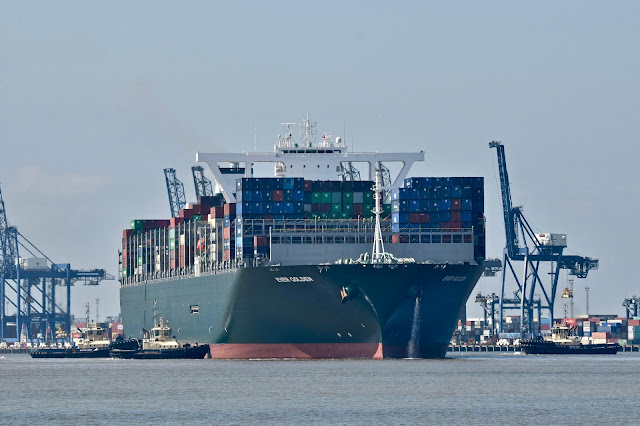 In October 2015, Evergreen signed a contract with the Japanese shipyard, Imabari, to have 11 newbuilds that has a capacity of 20,388TEU. These would be Evergreen's largest ship ever to join their fleet.
The first ship was delivered in April 2018 and named the Ever Golden. Within days of her delivery, she set sail on her maiden voyage to join the FAL7 route in the Ocean Alliance on an Asia-Europe rotation. With a cruising speed of only 21knots, from her main engine, a MAN B&W 11G95ME-C9.5 that kicks out 59,300kW she is actually a slow girl to pick up speed.

Coming to the end her European tour, she stops at Rotterdam to discrarge and load before making a trip across the North Sea to Felixstowe. While in rotterdam she got caught up in delays which caused her departure to be put back. Finally at 05:26 UTC +2 she departed which had a knock on effect for her maiden arrival to the Port of Felixstowe. The Harwich Haven pilot launch St Edmund heads out toward the Sunk with 2 pilots onboard. One for the RMS Duisburg and the second for the Ever Golden. As the RMS Duisburg was a small vessel heading up the Orwell for Ipswich, the pilot embarked at the Cork Pilot Station. Once complete the launch then headed to the Sunk where the Ever Golden was slowly approaching the pilot station. St Edmund reaches the Sunkand swings around to board a pilot on the starboard side of the Ever Golden. Once the pilot boarded, the launch retreats and powers away from the starboard side. The pilot makes his way up to the bridge to meet the captain. After a discussion with the captain, the pilot radios Harwich VTS to say they were inbound with a maximum draught of 12.5 metres with no defects from Rotterdam. VTS replied there was a ready berth planned portside to Felixstowe Berth 8. The pilot then asked for the wind on the Landguard and height of tide. VTS replies with the wind on the landguard which was ESE 101° 5-7 knots and height of tide 2.04 metres. After about 5 minutes the pilot came back on the radio and requested 3 tugs for berthing, two outside and the other inside the harbour. and would like the first in about an hour and 15 as she was a slow ship Duty tug, Svitzer Kent copied the converstion. Steadily making her way towards the South Shipwash, the Svitzer Kent leaves the tug pontoon shortly followed by the Svitzer Deben. Both tugs making their way out of the harbour to assist with the first obstacle of the port, a 90° turn into the harbour called the Beach End. A little while later the pilot and tugs switch onto a working channel for berthing. A small crowd gather on the jetty waiting for the Ever Golden to come in view. The radio cracks with the Kent noting about the stern and whether Renault had anything to do with the design of the ship. Couple of minutes later the Kent radios to confirm they are fast aft. Little while later Deben positions on the starboard quarter ready for a push indirect. In the mean time Svitzer Shotley paddles towards the Beach End where they wait for the ship to come on a Northerly heading so they can make fast centre lead forward. Ever Golden approaching the Beach End, the pilot gets the Kent move out onto the port quarter for a powered indirect while the Deben to push up on the starboard quater at a 45° angle to help steer the ship into the harbour. Once inside the harbour the Shotley makes their approach to make fast centre lead forward. Kent eases and drops in astern while Deben ease up on the quarter and makes fast. The pilot comes astern on the main engine to slow her down ready for a starboard swing off the berth. Further up the harbour Deben squares up and starts to increase power to push the stern around, Kent moves onto the port side but they were close to the to the buoy line and had to shorten their line. Shotley moves out onto the starboard shouder to take the bow around. The ship swinging to starboard, Shotley stops towing and comes in to let go so they could move up the ship to push her alongside. Kent moves onto the starboard side in a check position while the Deben and Shotley push her onto the berth and then pin her as the lines were made fast on the bollards. Final tie up 6 and 2 each end with springs first. ETD 16:00 Monday 21st May for Zeebrugge.