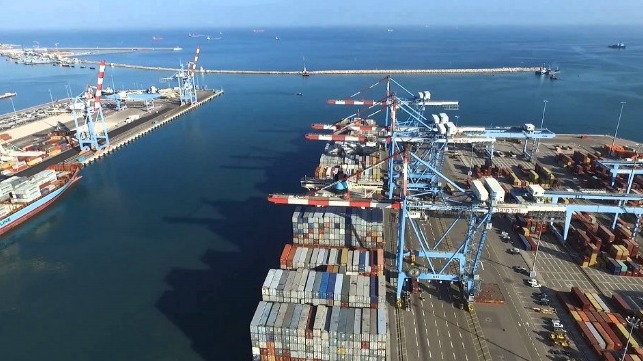 BY MAREX 2018
Stevedores at the ports of Ashdod and Haifa returned to work on Sunday after a court ordered them to end a four-day strike. However, shipping interests report that operations remain slow, and the local union leaders have threatened to resume their walkout.

Operations at Israel's two busiest seaports came to a halt last week as unionized workers walked out in protest of new, privately operated terminal concessions that will soon be built nearby. Israel's National Labor Court ruled Wednesday that these employees would have to return to work, and it ordered the police to deliver local union leaders to court to discuss the labor action. "In view of the circumstances . . . and because the work disruptions are in violation of agreements, we are issuing ex parte orders mandating an immediate return to work," the court ruled. After a hearing on Saturday, the longshoremen agreed to comply, and as of Sunday morning, operations were back under way at Haifa and Ashdod (though the latter port reported a slowdown).

The Manufacturers' Association of Israel asserted Monday that while the stevedores have physically returned to work, they are not carrying out their duties. "Our patience is running out and we will not hesitate to use all the means we have, including a personal lawsuit," the association warned. "The ports must be brought back to regular operations."

The court has already levied personal fines exceeding $20,000 for each of 11 local union leaders over their roles in organizing last week's strike. However, the penalty has not dimmed workers' interest in resuming a walkout: Israeli outlet Globes reports that many have petitioned Israel's national labor union, the Histadrut, to call a formal - and legal - labor action. "On Tuesday, we shall put an end to this unfair equation that denies the workers of Ashdod Port their democratic rights. This is an opportunity for the Histadrut to prove itself and restore the right to strike and defend the workers," said local union spokesman Avi Even-Haim.

In 2013, Israel's government agreed to allow the construction of new, privately-operated terminals adjacent to the Haifa and Ashdod port complexes. MSC's Terminal International Ltd. has a contract for a facility in Ashdod, and Shanghai International Port Group has a 25-year lease at Haifa. The new private terminals are intended to reduce the impact of labor unrest on shippers and to cut the cost of imported goods. Stevedores at the existing terminals demand that the government invest directly in the state-run ports to ensure that they remain competitive. In comments Monday, Even-Haim added that the workers believe the government may eliminate the Ashdod terminal altogether as part of its reform program.