On the 11th of May all maritime workers (dockers, seafarers, clerical staff, maintenance workers, workers in pilotage, mooring, towage...) will go on strike.


- To draw attention to the worsening of workplace safety in Italian ports and ask for an urgent plan to protect workers: the number of accidents in ports has rised over the last months, and three workers have lost their lives while working in ports since the beginning of the year


- Self-handling is a threat to all maritime workers: it erodes dockers' jobs and it jeopardise seafarers' safety. The authorities' answer to the growing number of attempts by shipping companies to breach the law has not been strong enough. The Italian law is very clear: dockwork can only be done by dockers. The legislation has to be enforced and breaches have to be sanctioned!
- Since the recent governance reform, there are serious concerns over the lack of a uniform application and proper enforcement of existing rules, among them on the right to strike, from the ports' governing bodies.
We express our full support and solidarity with our members FILT CGIL , Fit Cisland Uiltrasporti Nazionale in their legitimate fight to protect jobs and improve working conditions. 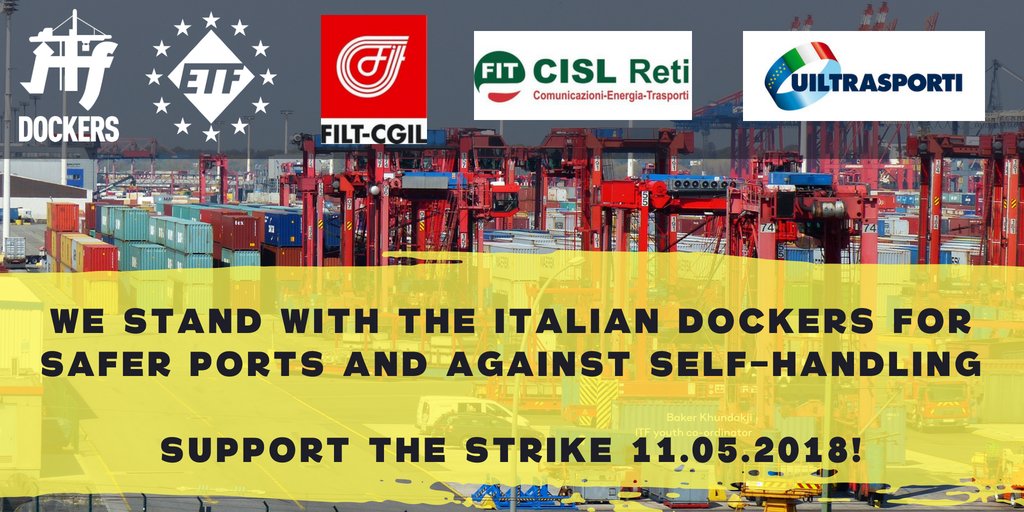 Image Courtesy: ETF
Workers across Italian ports launched a 24-hour strike on May 11, voicing their dissatisfaction over the lack of lashing legislation enforcement and poor safety in Italian ports.
The strike is lead by unions FILT CGIL, Fit Cisl and Uiltrasporti Nazionale, affiliates of the International Transport Workers’ Federation (ITF) and Dockers’ division of the European Transport Workers’ Federation (ETF).
All Italian ports are shut today, according to the Political Secretary of ETF Dockers Livia Spera. Based on the available information so far, the city of Genoa is blocked with several thousand people hitting the streets, while workers have organized gatherings in other smaller ports as well. Seafarers have joined the strike as it is also in their interest that lashing is done by dockers, Spera said.
Exact data on how many vessels are being affected by the delays due to the ongoing work stoppages is yet to be determined.
In line with the latest International Bargaining Forum (IBF) framework agreement reached between the ITF and Joint Negotiating Group (JNG) in February, only dockworkers have the exclusive rights to carry out lashing and other cargo handling services in ports for ships which are sailing under the flag of convenience.
As explained by Spera, Italian legislation allows national companies to carry out self-handling, which basically means that crew members of Italian-flagged ships can carry out lashing in particular circumstances. However, on such occasions, the shipping companies are required to get a permission from the relevant port authority.
Over the past six months, shipping companies have started to abuse this right and, have even breached the law, asking their seafarers to perform loading and unloading activities without obtaining port authority’s permission.  Some port authorities have also played their part by failing to enforce the regulation.
This is not sustainable because it jeopardizes a lot of dockworkers’ jobs, Spera said.

The unions are calling for dialogue with the authorities and concrete actions in order to deal with the issues at hand.
“In general, there is a lack of proper response from the relevant institutions and the government. This has been a problem for quite some time,“ Spera said.
The one-day strike follows two-hour nation-wide strikes staged as a sign of warning over the recent workplace safety situation in April 2018. Unions are urging for safety at ports to be upgraded after a number of workplace fatalities occurring this year.
For the time being, there are no concrete schedules for potential future strikes or union actions.
World Maritime News Staff