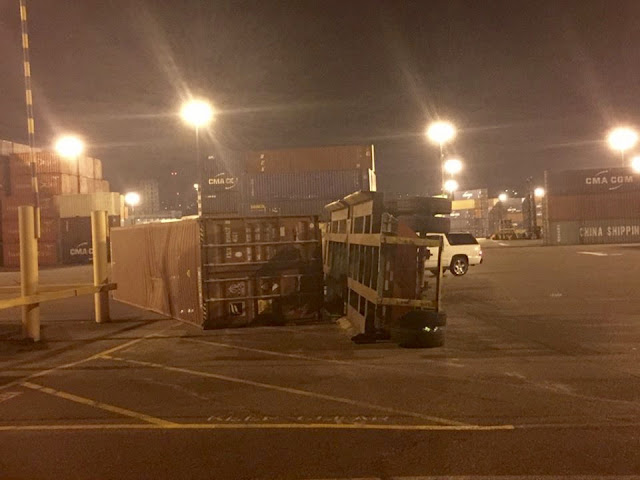 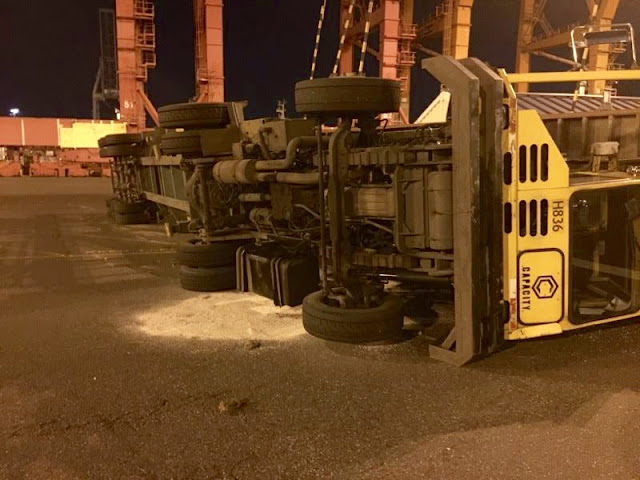 Tuesday night May 1st incident at SSA Terminal 18 Seattle, WA
UTR (Yard Tractor), with triple axle bomb cart and 40’ container rollover. At approximately 2:30am the operator received a 40’ container from the ship and travelled south down the apron headed to a location in the J row. As the driver approached the south breakroom and began making the right turn off the apron just before the south room the stated he felt the container jerk and shift to left, he look into the mirror and saw the bomb cart and container leaning, as he looked back forward he began to the UTR had started to roll. The driver pulled he left arm inside the widow, leaned he body to the right and braced for the impact. After the rollover the UTR and container both slid approximately 1-2 feet.
The operator was extricated through the right-side window by 2 UTR operators that witnessed the incident. The operator sustained minor injuries consisting of a scraped left elbow by broken glass from the driver side window, a scraped right knee that hit the steering wheel console and bruising along the left side. The operator was not fired or blamed for the incident. The Dock Forman and BA both said the container appeared to have been top heavy and possibly over weighted. The BA noted that the container had a sticker on it that read Super Heavy.