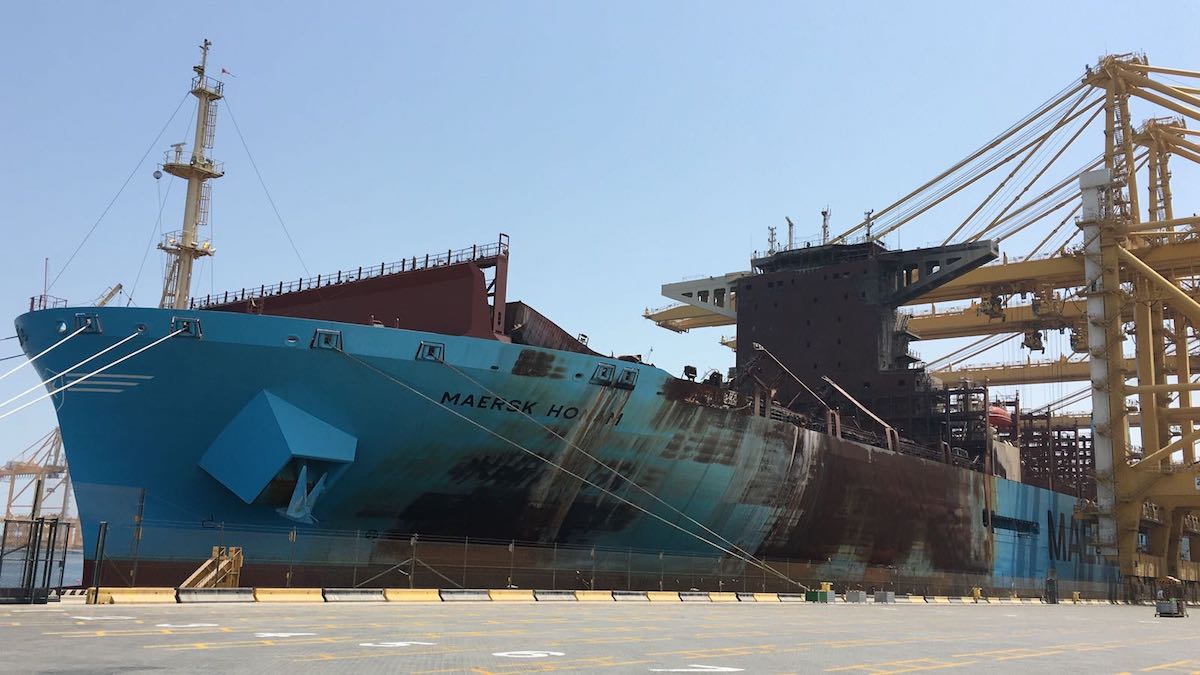 The fire-stricken containership Maersk Honam has now berthed at the Port of Jebel Ali where cargo discharge operations are now underway nearly three months after a major fire broke out on board the vessel.
Maersk Line confirmed in a statement to gCaptain that the Maersk Honam berth on Sunday, May 27.
The discharge operations for all undamaged cargo have commenced and are estimated to last approximately four to six days, Maersk said. 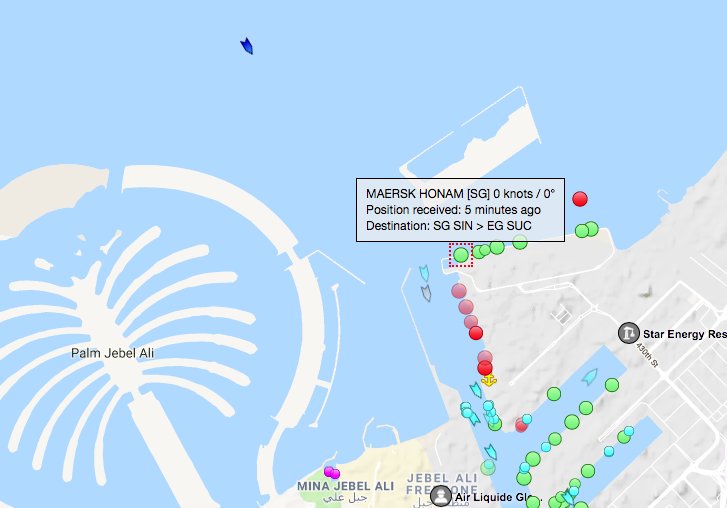 “The condition of the vessel will be further evaluated. As things stand it is our intention to repair the vessel,” Maersk added.
The 353-meter Maersk Honam, an ultra-large container ship (ULCS), caught fire on March 6 in the Arabian Sea en route to the Mediterranean Sea, via the Suez Canal. The incident claimed the lives of five crew members.
According to Maersk, the ship was carrying a total of 7,860 containers, corresponding to 12,416 twenty-foot equivalent units, when it caught fire.
All cargo in the forward holds 1-3 have been declared a total loss, but containers aft of the ship’s superstructure went largely undamaged.
The cargo loss forced Maersk to declare general average on 9 March and the company appointed Liverpool-based average adjuster Richards Hogg Lindley to collect the necessary GA security. The basic concept of GA is that all losses, including salvage, port, and transfer costs, are shared between surviving cargo.
Adjuster Richards Hogg Lindley has set the salvage security to the amount of 42.5% of the CIF (cost, insurance and freight) value of the cargo, with an additional 11.5% required as GA security.
The Singapore-flagged Maersk Honam was delivered in 2017 by Hyundai Heavy Industries in South Korea. It has a nominal capacity of 15,262 TEU (twenty-foot equivalent unit).

Cargo discharge operations on board the Maersk Honam have been completed and the first containers have been released after a three-month detour due to fire.
The ultra-large containership Maersk Honam, which was hit by a major fire on March 6, berthed at the Port of Jebel Ali on Sunday after sitting anchor off the coast for several weeks.
Mearsk said in an update on Thursday that discharge operations have now been finalized and the first containers cleared for onward transport.

The statement said cntainers which have been declared sound and for which all General Average and Salvage securities have been submitted are now being released and will be loaded on other vessels for transport to their final destination.
Maersk’s maintains that its intention is to repair the vessel, but the condition will be further evaluated after berthing.
A full investigation in collaboration with relevant authorities is ongoing to determine the cause of the fire.
“Maersk Line remains committed to assist all relevant authorities during the investigation,” the company said in the update.
The 2017-built Maersk Honam was loaded with 7,860 containers, corresponding to 12,416 twenty-foot equivalent units, when it caught fire in the Arabian Sea on March 6. The fire burned through all cargo holds forward of the superstructure.
Five crew members died as a result of accident.
Maersk declared general average on the vessel on March 9, appointing Liverpool-based average adjuster Richards Hogg Lindley to collect the necessary GA security. The adjuster later set the salvage security in the amount of 42.5% of the CIF (cost, insurance and freight) value of the cargo, with an additional 11.5% required as GA security.
The basic concept of GA is that all losses, including salvage, port, and transfer costs, are shared between surviving cargo.