Sailor stranded on ship at Great Yarmouth for 15 months 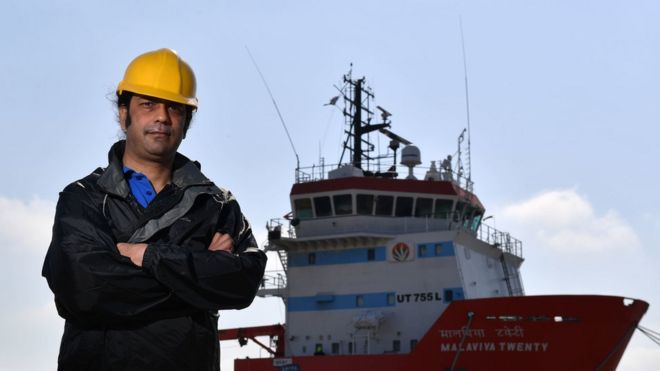 A sailor has been stranded aboard a ship moored in Norfolk for more than 15 months amid a legal dispute.
The Indian-owned Malaviya Twenty has been detained in Great Yarmouth docks since it arrived in June 2016.
Capt Nikesh Rastogi was part of a 13-strong replacement crew for the ship contracted in February 2017.
The International Transport Workers' Federation (ITF) said 33 crew members had been on and off the vessel since October 2015 and had not been paid.
Capt Rastogi, 43, from Mumbai, said if he were to leave the ship, it would be deemed a derelict.
He said anybody would then be able to take it over.

Capt Rastogi said the ship's owners fell into liquidation and his employers withdrew from operating the ship in January.
All of his original crew have returned to India, and he remains aboard with three crew members who joined him in September.
He said the four of them had not been paid since last year.

The ITF arrested the ship at Great Yarmouth in November 2016 and secured 688,000 US dollars (£517,045) for the asset's release to manning agents acting for the Indian Bank ICICI.
The money covered unpaid crew wages, with the last payment made in February 2017, the ITF said.
ITF inspector Paul Keenan said arresting the ship and selling it would raise enough money to pay everyone involved in the wrangle and repatriate the remaining four crew to India.

But he said Great Yarmouth port, which is owed unpaid dues, is "using legislation from the 19th Century" to demand three times the amount of rates.
A spokesman for Peel Ports, which manages the port, said it was an "ongoing legal matter" and he was unable to comment.
The crew aboard the ship's sister vessel, the Malaviya Seven, which was detained in Aberdeen, went home in November.