YM Efficiency Docks in Sydney with Stacks of Collapsed Containers

By Nicholas Ford SYDNEY, June 6 (Reuters) – A Taiwan-owned cargo ship docked safely in Sydney on Wednesday after losing 83 containersoff the coast of Australia during a massive storm which saw the ship battered by five metre (15 feet) swells.
The YM Efficiency limped into Sydney with a container hanging halfway off its side. It had arrived off Sydney four days earlier but was kept out at sea because the city’s main port was closed due to bad weather.
The challenge for port operators is to unload the remaining 26 damaged containers without the rest toppling into Port Botany.
The Yang Ming Marine Transport Corp owned container ship was travelling from Taiwan to Sydney when it sailed into a major storm about 30 kms (18 miles) off the country’s east coast, just north of Sydney. 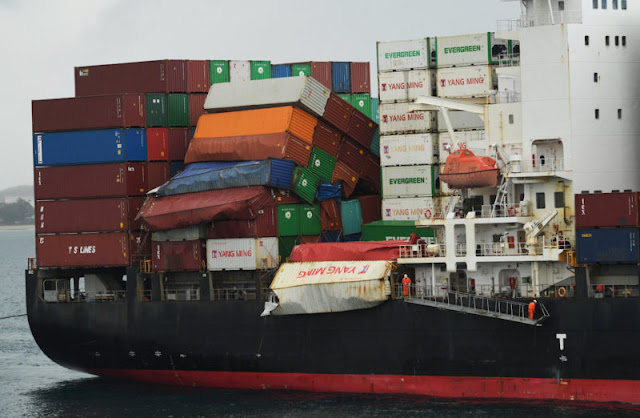 Since the incident, clocks, nappies and other products have washed up on Australia’s coast, according to local media. Yang Ming said no toxic material was released into the sea.
Australia to Investigate Loss of 83 Containers from Ship in Heavy Weather
The cleanup on the coast may take months as debris keeps washing ashore, Australian Broadcasting Corp reported.
Yang Ming has apologised for the accident and said it is using local contractors to find and clean up the debris. (Reporting by Nicholas Ford Editing by Michael Perry)
(c) Copyright Thomson Reuters 2018.

Related: Here’s How Many Shipping Containers Are Really Lost at Sea