Businesses step up plans to avoid gridlocked ports after Brexit 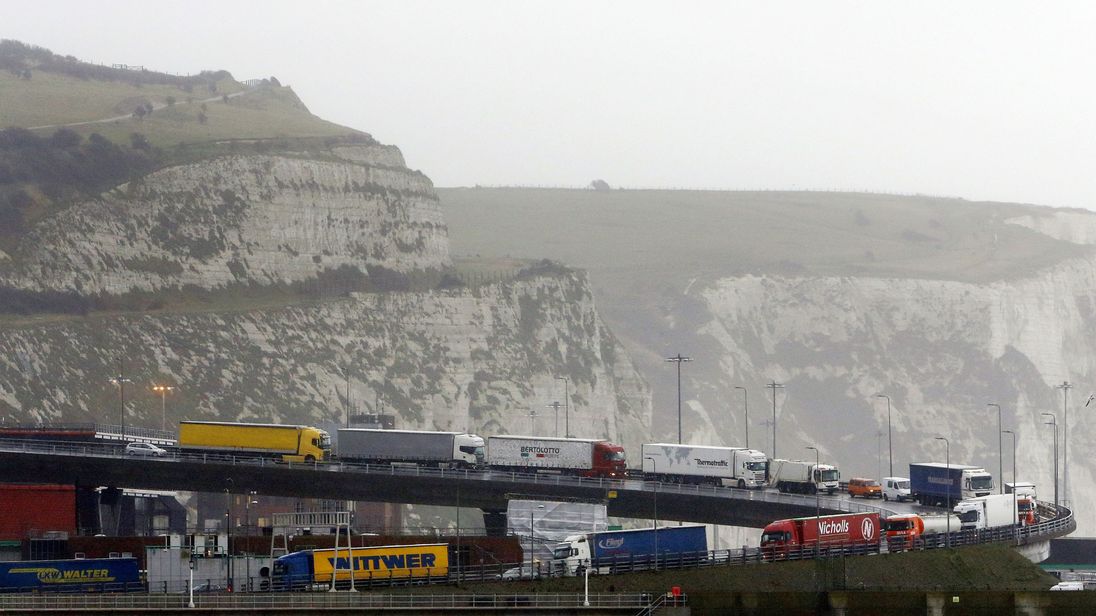 Business want to avoid long queues of lorries at ports such as Dover after Brexit. File pic

Plans are being developed to prevent lorries being stopped between the EU and British border, amid fears of queues and gridlock.

By Adam Parsons, business correspondent
Contingency plans are being drawn up to prevent lorries being stopped at the border as they make their way into the UK from Europe.
There are growing fears that more onerous border controls after Brexit could result in huge queues and potential gridlock at ports such as Dover and Felixstowe.
Under the plans - seen by Sky News - vehicles would be checked at an "approved location" in Europe and then waved through the UK border. They would then have to go to an "approved inland location" in the UK, away from the port of entry, to be checked again.

However, the same plan shows the confusion that exists around the future of the Irish border, with a suggestion that in the event of a "no deal" Brexit, there may be no choice but to persist with today's regulations and "pick up the pieces later".
The framework for customs and border regulation has been been discussed with growing intensity by members of the Joint Customs Consultative Committee (JCCC), a highly influential forum for British businesses involved in importing and exporting.
The JCCC holds regular meetings with HM Revenue and Customs to offer advice on government policy.
It recently met to discuss contingency plans in the event of a no deal Brexit, discussing the idea of building "additional inland locations on a fast-track basis, even as a temporary measure".

But notes from the meeting show the confusion that continues to swirl around British business in relation to the border between Northern Ireland and the Republic of Ireland.
"I really don't know what to say about the Irish border," says one member of the committee.
"Other than we might devise a system of enhanced self-assessment, let people just do what they are doing now, and pick up the pieces later."
In the midst of these debates, HMRC is about to introduce a new computer system, called CDS, to process import and export documents.
It will replace a system known as CHIEF, which has been running for 25 years, sparking fears that, against the backdrop of Brexit, the new system is likely to add to confusion.

One industry insider said reacting to Brexit would be "hard enough using CHIEF" and described the decision to switch to CDS at the same time as "a step too far".
The committee's members have also been damning in their criticism of the government's latest Customs Bill, which is making its way through parliament.

A note distributed to members said that "the general view is that... the primary legislation is not fit for purpose".
It claimed there had been insufficient consultation and failed to address many of the significant challenges predicted to be created by Brexit - particularly a so-called hard Brexit.