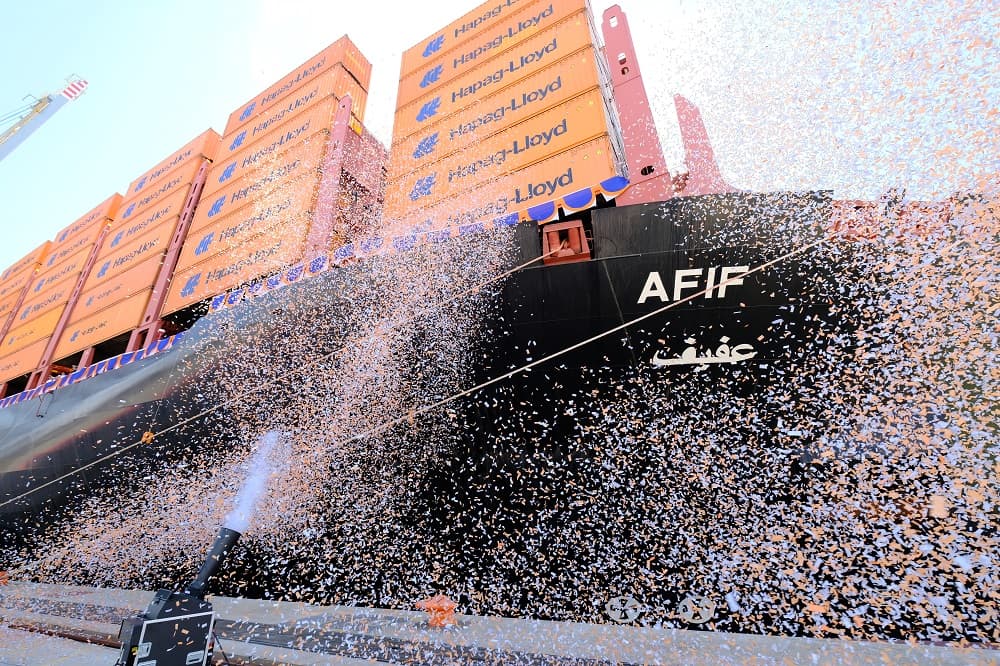 Hapag-Lloyd AG officially named one of its newest vessels – facilitating trade between the UK and the Far East – on the River Thames on Monday.
The honour of formally naming the vessel was bestowed upon the UK’s shipping minister, Nusrat Ghani, at DP World London Gateway, the UK’s fastest growing container port.
She christened the vessel ‘Afif’, which is Arabic for ‘purity’ and ‘honesty’ and the name of a city in central Saudi Arabia, in the Najd region, situated halfway between Riyadh and Mecca.
The ceremony saw Ms Ghani smash a sacrificial bottle of champagne against the bow of the ship, after wishing this new vessel – which can hold 15,000 twenty-foot containers -  good luck and Godspeed as it transits the oceans transporting billions of pounds worth of cargo between Britain and international markets. 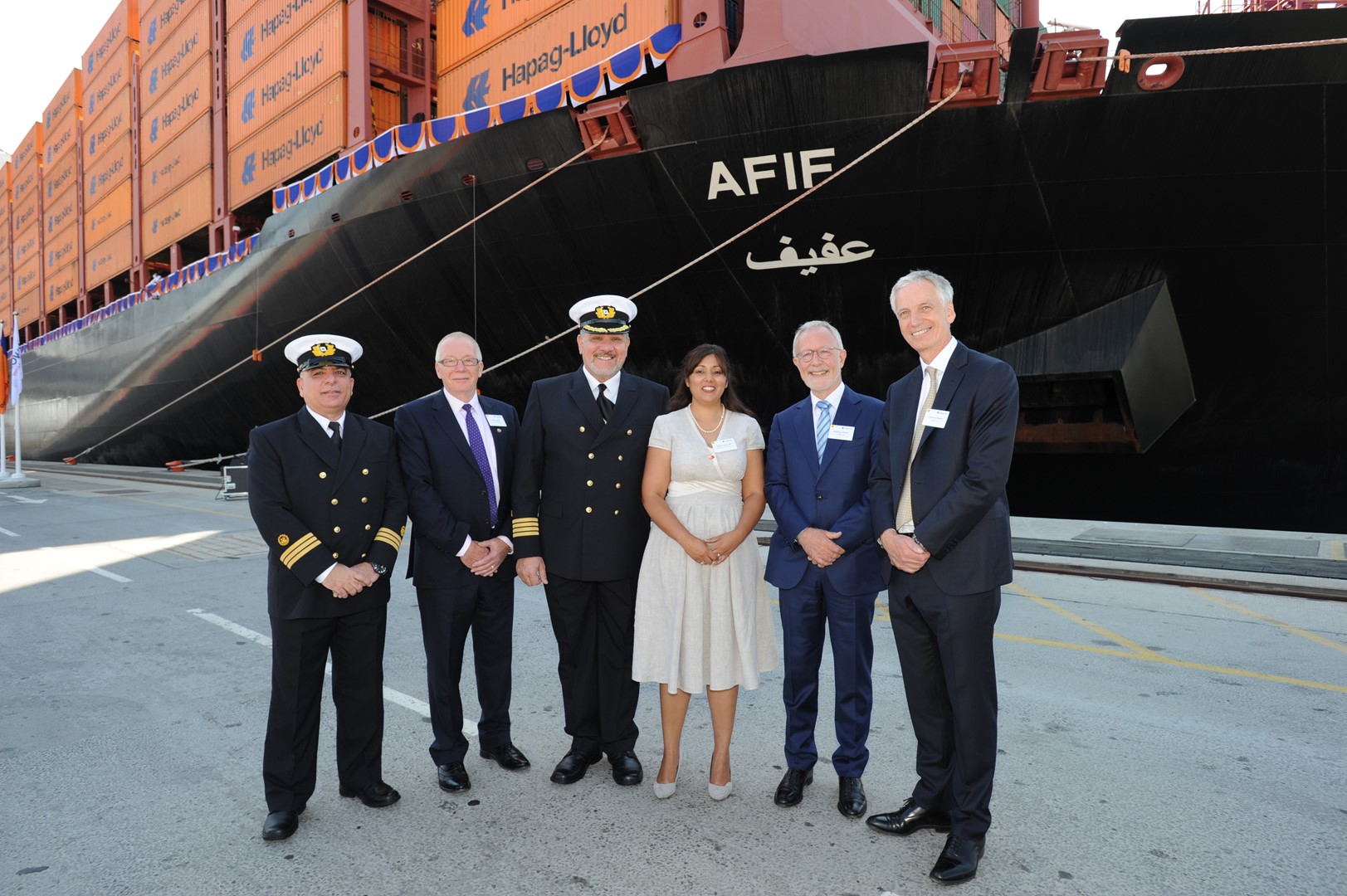 Speeches were made by Ms Ghani, Anthony J. Firmin, Chief Operating Officer at Hapag-Lloyd AG and Chris Lewis, the UK CEO of DP World, before an audience of 260 importers, exporters, supply chain executives and Government officials.
Afif is 385.5m long and LNG (liquid nitrogen gas) ready, offering the potential for significant reductions in emissions. This supports Hapag-Lloyd AG’s environmental principles for a mixed fuel future.
DP World is a global port operator, and its London Gateway site offers access for the next generation of container vessels, such as Afif, with unmatched deep-water access and future-proofed technology in a premier location, just a short distance from Central London.
Hapag-Lloyd AG operates or has cargo on 11 services into and out of DP World London Gateway from the Far East, South America, Australia, the USA, Pakistan, India, South Africa and the Caribbean.
Anthony J. Firmin, Chief Operating Officer and Member of the Executive Board of Hapag-Lloyd AG said: “This is the first time in 20 years that Hapag-Lloyd has named one of its vessels in Great Britain. Afif is more than three times the size of London Express, named in Southampton in 1998. Two decades on, we are extremely proud to be naming another new vessel and grateful to the UK’s shipping minister for undertaking this traditional ritual.
“Today we have celebrated more than the introduction of a new, environmentally vessel to the Hapag-Lloyd fleet. We have celebrated the UK’s position as a global trading partner and we were delighted that so many key people from within the shipping, logistics and supply chain industries were able to join us.
“You can always rely on our presence here in Great Britain - working with partners like DP World - to enable and facilitate trade between the UK and all international markets. And we’re delighted to welcome Afif to our fleet of vessels to deliver international trade.”
Nusrat Ghani, Transport Minister, said: “Shipping is key to the UK, enabling trade right across the world and helping deliver food to our cupboards and energy for our homes.
“It’s an honour to name Afif, Hapag-Lloyd’s latest container ship, as it will have a vital role in the growth of the UK economy by moving our exports and imports.
“Hapag-Lloyd, by naming its ship in the UK, shows it has great confidence the country will exploit new opportunities that arise from Brexit.”
Chris Lewis, CEO, DP World London Gateway, said: “We’re extremely proud to have hosted the official naming ceremony of Hapag-Lloyd’s Afif today and further cement our strong relationship. 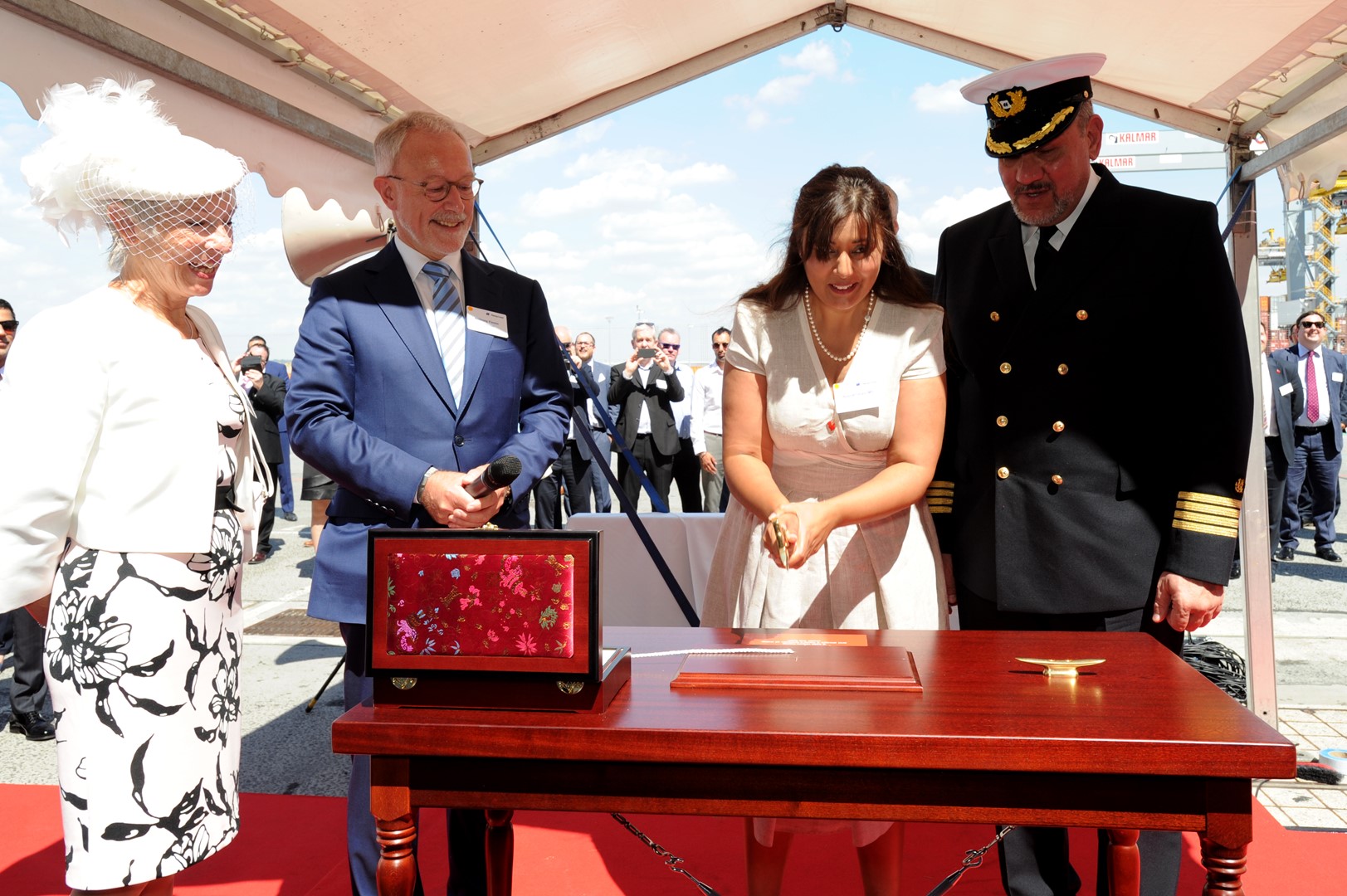 “Hapag-Lloyd has been a key early customer and supporter of DP World London Gateway and we are pleased to collaborate with everyone in the supply chain to give UK shippers fast, reliable and safe access to a global network via Hapag-Lloyd.”
DP World London Gateway links the UK to more than 100 ports in over 60 different countries, offering Hapag-Lloyd AG the ability to connect with markets and customers all over the world. 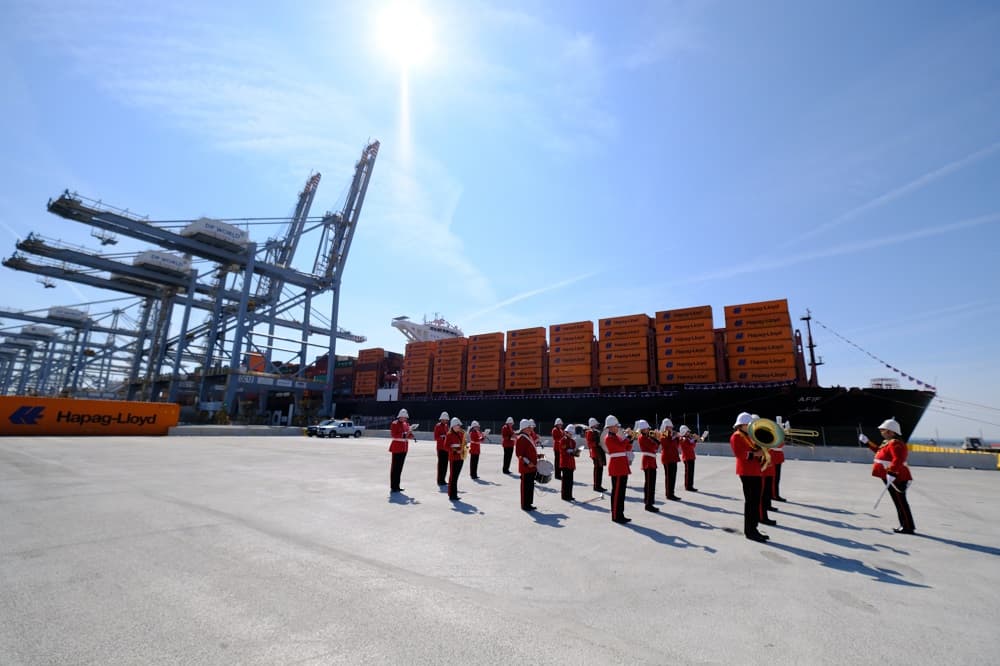